Writing last week’s column on culture and religious faith reminded me of one of the most successful and enjoyable parish activities I was involved in many years ago when I was a parish priest at St. Finbar’s parish in Bensonhurst. At one point another priest and I were moderators for 21 discussion groups. 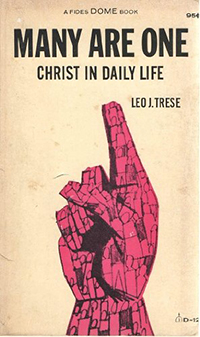 Even writing about that apostolate now I can recall how fulfilling and encouraging working with those parishioners in the discussion groups was. It was a wonderful experience to observe people become excited about insights they were receiving about their faith.

Today the pandemic poses several problems for a discussion group but even if starting a discussion group may be difficult at this moment, online discussions may be possible. I want to report how the groups were conducted back then just in case by the fall or the end of 2021 it will be safe to meet in small groups. Or perhaps a group could be conducted online, for example on Zoom.

All 21 groups started with the same book, Father Leo Trese’s marvelous paperback, “The Many Are One.” It has been years since I looked at the book but back when we were using it, Trese’s book was the perfect book for a parish discussion group. Time and again I observed people who read “The Many Are One” being led to a conversion experience. I don’t recall anyone disliking the book.

One summer I moderated a teenage group. Toward the end of the summer, we had a general meeting to which all the groups were invited. Almost 60 years later I have a clear memory of a teenage girl standing up to make a statement describing her experience in the group she attended. She said the following: “A month ago I had no idea what the Mystical Body of Christ was. Now it expresses what my whole life means.”

One rule that the other priest and I insisted on for the discussion groups was that the meetings would take place in a member’s home, the location changing with each meeting. The other priest and I thought that insisting that the meeting take place not on church grounds but at a member’s home was a small commitment asked of each member, a commitment indicating a willingness to take the program seriously. Also from experience, we learned that some members of the family hosting would listen in on the discussion and perhaps eventually join a group.

The image that I had of the program was that it would begin with one group but eventually lead to more groups, and that was exactly what happened. Each member of the first group was encouraged to eventually start another group. The schedule was that a group should meet eight times in the fall and then eight times in the spring. Most people found this more doable than meeting every week ex- tending beyond eight meetings.

Taking a break between sessions avoided overkill. The general plan was to discuss the book for about an hour and a half and then have coffee and cake for half an hour. It was important to stay within the time limits no matter how well the discussion was going. This was especially important for groups that met in the evening.

The following are some of the reasons the program was a success.

The program was run by laypeople who had to make the effort of mastering the book and applying it to their lives and then share their opinions at the meeting with others.

Much in the book stressed that the Church was not just the hierarchy but also laypeople. The program was encouraging people to be responsible for their faith and to bear witness to others. That was actually happening in the groups.

The book and discussion urged the members of a group to live up to what they were reading, to incarnate the values and insights in the book and in the discussions into their lives. One of the enjoyable outcomes of the groups was experiencing laypeople urging priests to promote what Father Trese was stressing in the book.

Any discussion group formed today would have to take special precautions because of the pandemic. I wonder if through the use of programs available online the meetings might be even better than those I experienced many years ago.

Different innovations are popping up in my mind as I am typing. Could the number of members be increased online while still making it possible for each member to participate? That so much is available online makes me wonder how this might open up a treasury of information and a new source of feedback. For example, everyone might watch a talk online at home and then discuss it at the meeting.

The possibilities for discussion of faith might be unlimited.

Father Lauder is a philosophy professor at St. John’s University, Jamaica. He presents two 15-minute talks from his lecture series on the Catholic Novel, 10:30 a.m. Monday through Friday on NET-TV.