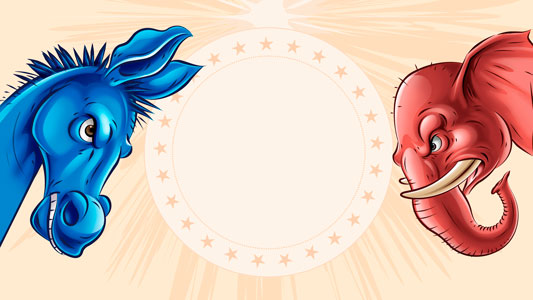 Political parties are always coalitions of different tendencies, philosophies and opinions. This is especially true in the United States. For most of its history, and for all practical purposes, America has had a bipartisan political system. At the time of the last presidential election, there were 245.5 million Americans ages 18 and older. There are more than two political ways of thinking in America today, but we just have two political parties with a real shot at winning a presidential election.

But the lack of real opportunities for a candidate outside the two main political parties is not limited to presidential aspirations. For the longest time now, few politicians managed to have a successful career as independents or third-party candidates.

These conditions have a homogenizing effect in our political world. While the electorate doesn’t always follow strict patterns of preference on the issues of the day, sometimes the elected officials are bound to toe the party line to get their party’s support.

This is especially true for the issue of abortion and the Democratic Party. If you google the phrase “pro-life democrats,” the first three articles that come up have the following headings: “‘If You’re a Pro-life Democrat … You Know You’re Standing Alone’” (Politico Magazine), “This Could Be the End of the Road for Pro-Life Democrats in Congress” (Slate) and “The Uncertain Future of Pro-Life Democrats” (Christianity Today).

Between 22 and 30 percent of Democratic voters are pro-life. But the leadership of the party is radically pro-abortion.

The concept that Hillary Clinton proposed a quarter century ago of “safe, legal, and rare” abortions has been replaced by some politicians with an enthusiastic promotion of abortion, even in its most gruesome and revolting forms – late-term and partial-birth abortions.

Only 29 percent of voters think abortion should be legal under any circumstances, according to a Gallup survey from 2018. But abortion under any circumstances is – in practical terms – what the Reproductive Health Act (RHA) proposes. Recently approved by the New York legislature, it legalizes aborting babies up until moments before birth. The act had passed in the Democratic-controlled assembly multiple times in recent years, only to be rejected in the Republican-controlled Senate.

Now the Democrats hold a majority in the Senate too, and this time the act was approved by the upper chamber in a 38-24 vote on Jan. 22, the 46th anniversary of the U.S. Supreme Court’s Roe v. Wade decision establishing a woman’s right to an abortion.

Inspired by their ethics, Felder, an Orthodox Jewish politician, and Addabbo, who is Catholic, decided to vote according to their conscience, instead of their party’s platform.

They know there is a price to pay for such a decision.

The fact that they voted as they did is a sign of hope.

2 thoughts on “The Intersection of Ethics and Politics”