This is the first in a series of articles about the future of Catholic schools in Brooklyn and Queens.

What the average person isn’t seeing, however, are the green shoots of hope, partnerships, collaborations, dedicated educators working behind the scenes to come up with fresh and innovative ideas, and the energy, excitement, enthusiasm, and new life that is being breathed into Catholic education in the Diocese of Brooklyn through the formation of academies and other initiatives.

To date, 17 academies have been formed and the recently released Preserving the Vision Strategic Plan 2011-2014 calls for all Catholic schools in Brooklyn and Queens to become academies by 2017.

“The new strategic plan will build on the success of Preserving the Vision, which was launched in 2008, with the goal of furthering the mission of Catholic elementary schools by creating multiple partnerships designed to strengthen Catholic education in Brooklyn and Queens,” according to Bishop Frank Caggiano, Vicar General.  “Since the introduction of Preserving the Vision, 17 academies have been established. We now have experienced the dynamism of the academy governance structure which involves dedicated clergy, religious, and laity who have committed themselves to the continued growth of Catholic education in our diocese.”

The parish/school model that has been the norm since the first Catholic immigrants began pouring into New York City in the 19th century has become unsustainable for a number of reasons.  As recently as 30 years ago, 90% of the teachers in Catholic schools nationwide were members of religious orders and, as such, were only paid a stipend, enabling parishes to offer tuition-free schools, according to Dr. Mary Jane Krebbs, associate dean for Graduate Studies and Co-director of the Institute for Catholic Schools at St. John’s University. Today, the number of teachers in religious orders has dropped to between three and four percent. Lay faculty who are paid salaries have filled the void, making tuition a necessity.

Also, two recessions in the last 10 years have adversely affected the ability of parents to pay tuition, prompting many families to leave the city or make the difficult decision to send their children to free public schools.  Their departure left many Catholic schools with declining enrollments that forced tuition hikes for the remaining families to keep up with rising costs.

Preserving the Vision Strategic Plan 2011-2014 has set a goal of reversing the trend and increasing K-8 enrollment in Catholic elementary schools in the Diocese of Brooklyn by 10% every year, and increasing development efforts so that by 2017, when all schools have been converted to academies, 30% of operating revenue comes from sources other than tuition. 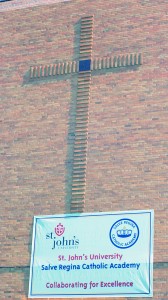 Preserving the Vision also recognizes that the role of the parish at the center of school life has changed as parents are willing to leave their zip codes in search of Catholic schools closer to their work place or ones that offer programs more compatible with their child’s learning style, Dr. Krebbs said.  As a result, the goal of Preserving the Vision is to create academies that are in many cases regional schools serving children in multiple parishes.  In the academies, all teachers are certified, cutting-edge technology is being introduced, and partnerships with high schools and colleges are being developed.

The academies are run by a two-tier governance structure made up of Members, who are pastors of churches aligned with the school and who are responsible for Catholic identity, and, in the spirit of the Second Vatican Council, a board of directors, made up of lay leaders with an expertise in areas such as finance, education, development, marketing, and facilities.

Sister Angela Gannon, C.S.J., Secretary for Catholic Education and Formation, describes Preserving the Vision Strategic Plan 2011-2014 “as a pathway to the future for Catholic education in Brooklyn and Queens for the next three years” to be used by principals, pastors, board members, and directors as they chart the future of their schools or academies to ensure their “fidelity to the educational and evangelizing mission of the Church.”

Thomas Chadzutko, Ed.D, Superintendent of Schools – Catholic School Support Services, said his office has identified priorities to support the implementation of Preserving the Vision Strategic Plan 2011-2014. “My office will be assisting the schools and academies achieve the overall goals of the strategic plan for the diocese as well as help them develop and implement strategic plans for their own institutions,” he said.

A full copy of Preserving the Vision Strategic Plan 2011-2014 is available at mybqcatholicschool.com.

Gail Donovan is a member of the diocesan Strategic Marketing Communications Committee for Catholic Schools.

Preserving the Vision Strategic Plan 2011-2014 has set the following six major priorities for the next three years:

• Strengthening the Catholic identity and academic excellence of the schools and academies in the Diocese of Brooklyn.
• Increasing enrollment through effective marketing and outreach to the diverse communities in the diocese.
• Attracting new sources of funding to increase the dollars available at the local and diocesan levels for operating revenue and tuition assistance.
• Transitioning all schools to academies by 2017 and ensuring that the academies are vibrant institutions providing an excellent Catholic education.
• Utilizing up-to-date technology to enhance instruction, improve marketing efforts and facilitate effective communication with parents and between schools and the diocese.
• Participating in the diocesan parish strategic planning process, Christ Jesus Our Hope, and strengthening connections between schools, academies, and the home parishes of their students.