This is the third in a series of articles about the future of Catholic schools in Brooklyn and Queens. 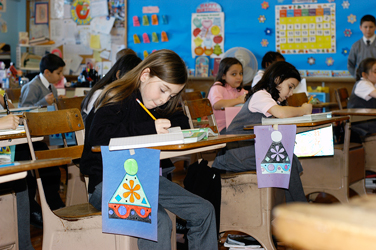 Ask Rosemarie McGoldrick, principal of Holy Angels Catholic Academy, Bay Ridge, about the best part of establishing a new academy and she’ll answer “the opportunity to have a new beginning.”

Holy Angels Catholic Academy opened in September, 2009, in the building that previously housed Our Lady of Angels School, which closed. The new academy’s marketing, branding, and recruiting efforts have already boosted enrollment to 236 students  from last year’s 175 students.

“Enrollment is increasing from the bottom up,” McGoldrick said. “We’ve had so much interest since the academy opened that we’ve had to open a second pre-k class and a second kindergarten.”

Holy Angels Catholic Academy is one of 17 academies established in the Diocese of Brooklyn under Preserving the Vision.  All Catholic schools in the Diocese of Brooklyn will be converted to academies by 2017.  The academies are new entities that have replaced a single school or schools that have merged, and are supervised by a two-tier governance structure made up of members, who are pastors from surrounding parishes, and boards comprised of lay people.

To support academy principals and boards, Dr. Mary Jane Krebbs, associate dean for Graduate Studies and co-director of the Institute for Catholic Schools at St. John’s University, and her team from St. John’s provide them with a two-year training curriculum, in-service sessions, on-site visits, and other resources.

“The goal is to enable the principals and boards to make a smooth transition into a new life cycle for Catholic education,” said Krebbs, who also serves as chair of the Strategic Planning subcommittee of the Preserving the Vision Advisory Committee.

As part of the academy’s marketing and rebranding efforts, McGoldrick took the time to explain to parents how the new entity would differ from the former school, including the new governance structure, role of the board, and the role of the pastor as the spiritual leader for the students. New uniforms were introduced and new teachers hired, she said, adding that all faculty members working in academies must be state certified.

During the first year as an academy, the board voted to use money from a reserve fund to upgrade the building’s technology and now Holy Angels features a new computer lab, laptop program, and SMART Boards and Internet access in the classrooms. Computer, gym, library, art, and music are part of the curriculum, and students in grades three through eight also take Spanish classes.

As part of their contracts, teachers are required to organize one club once a week for an hour. The clubs are offered free to students in first through eighth grades and include tap dancing, sports, sign language, word puzzles, music, art, board games, and a book club. Another change was the extension of the nursery program from half-day to a full-day, and the creation of a separate early childhood gross motor skills playroom.

A supportive board helps McGoldrick with administrative tasks, which frees the pastors from Our Lady of Angels and neighboring St. Andrew the Apostle to focus on the spiritual needs of the students.  The result is the quality of the education at Holy Angels Catholic Academy has improved.

Help for Principal
Suzanne Karl, chair of the board of Divine Wisdom Catholic Academy in Douglaston and a member of the Preserving the Vision Advisory Committee’s Marketing, Recruitment, and Retention Subcommittee, said the board of Divine Wisdom includes representatives from all professional fields, which enables Principal Michael LaForgia to spend his time and energy on academics.

Karl concedes that closing St. Anastasia School and reopening as Divine Wisdom Catholic Academy in the same building in 2009 was challenging. The reward, however, is “bringing new life into the building,” she said. “There’s a lot of energy here. It’s been very fulfilling. We’ve started a new business. One school closed and we started another from scratch.”

As part of the academy’s marketing and branding strategy, the board voted to upgrade and renovate the entire building, strengthen academics, and add classes that public schools in the area were eliminating, Karl said.
While public schools have cut programs like gym and art, Divine Wisdom has added an early childhood wing; Spanish beginning in pre-kindergarten; and instruction in musical instruments for students in third, fourth, and fifth grades. Divine Wisdom has introduced Balanced Literacy, which tests a student’s reading level and monitors it to ensure that he or she is advancing, and the academy takes a holistic approach to the curriculum by integrating art and computer lessons into academic subjects.

Divine Wisdom recognizes and celebrates its diverse student body and has hired consultants to train teachers on methods of teaching differential learning to ensure that the needs of all students – advanced, average, and those needing additional assistance – are being met.  The academy also offers accelerated math for sixth, seventh, and eighth grades, which prepares students to take the state Regents tests. For students with special needs, a resource room, ESL classes, and special education are available.  In addition, the academy is partnering with St. Francis Prep, Fresh Meadows, on community service and academic programs, and participates in programs offered by St. John’s University.

The result of these changes is that Divine Wisdom has added 100 students from the public schools and boosted its overall enrollment to 276.

“Once parents come in for a tour, they’re sold on the school,” said Karl, who, as the board member with marketing expertise, personally gives most of the school tours in part to learn what types of programs parents are seeking so she can recommend them to the board.

He praised members of his academy’s board of directors and chairperson Katherine Loughran. “The board has ideas for maximizing the education of each individual child,” he said. “We don’t see why a school in a low-income, immigrant neighborhood shouldn’t have the best of everything. We focus on the needs of the community and have a shared belief in servant leadership – everyone working with the same goal in mind.”

A full copy of Preserving the Vision Strategic Plan 2011-2014 is available at http:/mybqcatholicschool.com.
[hr]
Gail Donovan is a member of the diocesan Strategic Marketing Communications Committee for Catholic Schools.