Second in a series

In his exceptionally good book, Broken Signposts: How Christianity Makes Sense of the World, HarperOne, pp. 198, $ 27.99), scripture scholar N.T. Wright, the former Bishop of Durham in the Church of England, claims that there are seven signposts, (Justice, Love, Spirituality, Beauty, Freedom, Truth and Power) that in one way or another everyone wishes to have present in their lives and that all cultures wish to embody. However, something must have gone wrong because these signposts don’t seem to be working as they should. So Wright calls them “broken” and argues that a careful reading of St. John’s gospel will reveal how these signposts can be fixed and revitalized so that they can be effective in our lives. 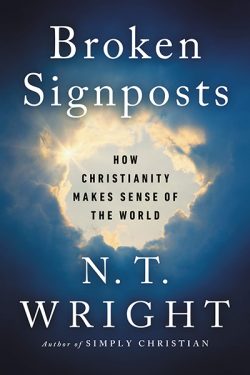 In his chapter on love Wright offers the following reflection:

“The word love, whatever its finer shade of meanings, is all about relationships. It is about being drawn out of myself toward something or someone else, in whatever way and with whatever short- or long-term aims or effects. It is about discovering that ‘I’ become more ‘myself’ when I am in relationship-even if that relationship might be, for a time at least, with a mountain, a horse, a sunset, a child, a sweetheart, a house, a hospital patient, colleague or a neighbor. ‘Love’ is an arm-waving term that indicates that I know in my bones that I need to be part of something bigger than myself, something that gives me a sense of coming home, something in which I find warmth, security, meaning, delight, and even a sigh of relief when that comes to expression. That is fine. It’s better to wave your arms vaguely at something than to forget it exists.” (p. 36)

I think that there are large numbers of people who either do not realize that they need to be part of something bigger than themselves or have not found that something. This is a very serious problem. Those of us who think we have committed to something larger than ourselves should try to live our story as best we can. In philosophy classes, I occasionally urge students to choose careers or vocations that will lead to personal fulfillment. I mention that the happiest people I know are people in service professions.  Choosing a service profession probably will not make a person a millionaire but an extremely large salary may not take the place of a job in which an individual believes that he or she is spending their waking hours helping people. I tell the students that if they cannot choose a service profession then they should try to find themselves part of a story bigger than themselves in some way other than their way of employment. I imagine that many find this bigger story through love relationships within their family and perhaps also through volunteering to join groups that reach out to help others.

I continue to be surprised how some of the most gifted and talented artists have dramatized the lives of characters who have not found a bigger story. I immediately think of my favorite American playwright Eugene O’Neil and his plays “Long Day’s Journey into Night” and “Moon for the Misbegotten” or the Swedish author-director Ingmar Bergman and many of his films such as “The Seventh Seal,” “Cries and Whispers” and “Scenes from a Marriage.” I think Bergman is the greatest talent in the history of film and yet he was artistically preoccupied with failed love relationships and the struggle to find meaning in the face of death.

When I first read the paragraph from Wright that I have quoted, the word “relationships” leaped out at me. In my undergraduate education, there was very little attention paid to the nature of human relationships. The meaning of relationships was largely neglected. Now I think about them, write about them, and pray about them often. In recent years my own thinking about relationships has significantly changed. I agree with Wright that love means being drawn in some way outside ourselves into various kinds of relationships. I have never had a pet and probably for most of my life, I looked down on people who had become strongly attached to animals. Now I think my previous attitude was seriously wrong. I now think that through animals, who are creatures of God and in whom God lives, we can be deeply touched and even indirectly experience God’s presence. Recently I watched the wonderful film “Seabiscuit.” The film seems to be an accurate depiction of how the horse deeply influenced its owner, its jockey, and its trainer. The relationship between Seabiscuit and its trainer is especially touching.

I should have known that in one column I could not report all the insights Wright has into the mystery of love, especially as presented in John’s gospel.

I will try again next week.

Father Lauder is a philosophy professor at St. John’s University, Jamaica. He presents two 15-minute talks from his lecture series on the Catholic Novel, 10:30 a.m. Monday through Friday on NET-TV.