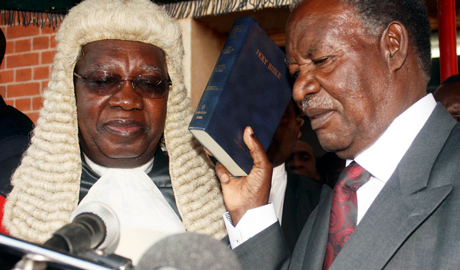 Newly elected Zambian President Michael Sata, right, holds a Bible as he is sworn in at the supreme court in the capital, Lusaka, Sept. 23. Sata is Zambia’s first elected Catholic president.

LUSAKA, Zambia (CNS) — Zambia’s first elected Catholic president told members of his parish he will base his rule on the Ten Commandments.

President Michael Sata, 57, elected Sept. 20, also commended the Catholic Church for the role it played in ensuring that the nation held peaceful elections.

Sata, a member of St. Ignatius parish in central Lusaka, told fellow parishioners Sept. 25 his government will embrace the fight against corruption because the Seventh Commandment states, “Thou shall not steal.” He said his government will prosecute anyone who steals despite his or her socio-economic status or party affiliation.

The new president said he would ensure equal distribution of wealth among all Zambians, saying he would not want to see a situation where his children have three meals a day while others had none.

Sata, who grew up in a Catholic family in Mpika Diocese in northern Zambia, also emphasized the need for people across the country to love one another and embrace reconciliation. He commended church officials for preaching about reconciliation and said his government would embrace Catholic ideas of discipline and serving the people.

Earlier, Sata and wife, Dr. Christine Kaseba, who regularly attend the 6 a.m. Sunday Mass at St. Ignatius, were blessed by the congregation.

Father Charles Chilinda, the parish priest, prayed that God would grant the president wisdom, knowledge and good judgment so he could effectively govern the people of Zambia.

The president of the Zambian bishops’ conference, Bishop Ignatius Chama of Mpika, urged Sata to embrace all Zambians, regardless of their political affiliation, just like Jesus and the Catholic Church did.

The bishop said Zambian Catholics would pray for the president to lead people with humility, fairness and commitment.

Sata replaced Rupiah Banda, who took over leadership of the state after the sudden death in office of President Levy Patrick Mwanawasa in 2008 and won the presidential election in October of that year.

In the year before the current election, church leaders – including bishops – spoke out several times against actions by Banda’s government, which accused the church of favoring opposition leaders.