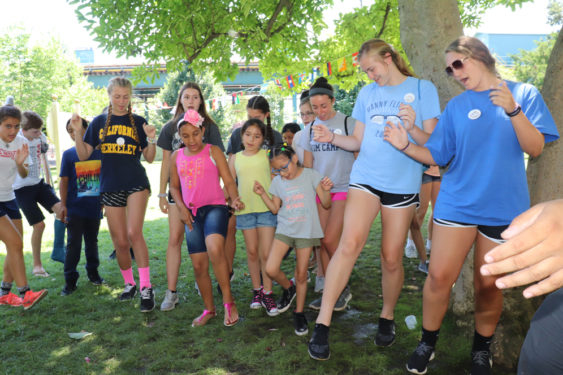 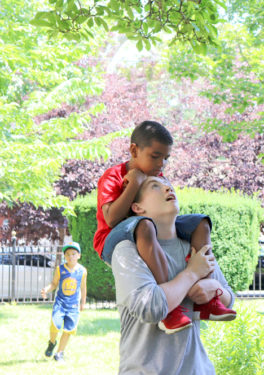 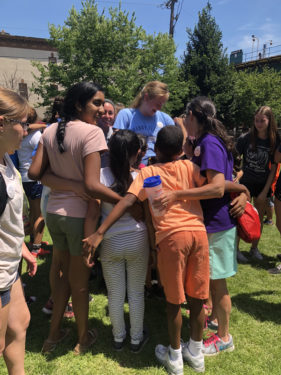 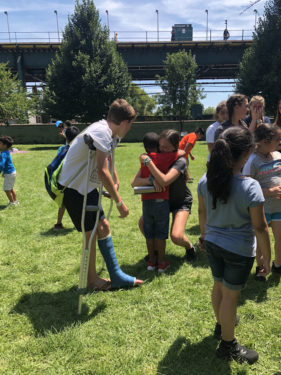 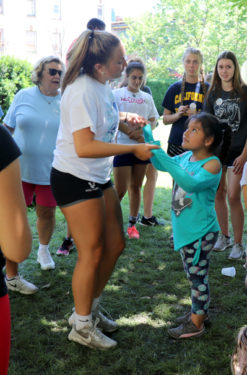 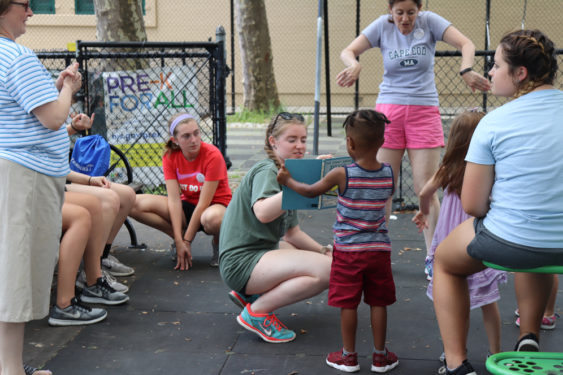 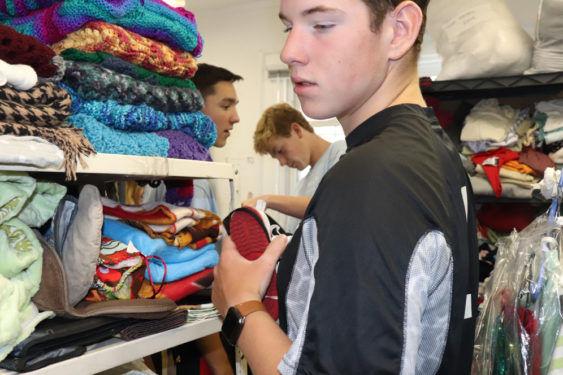 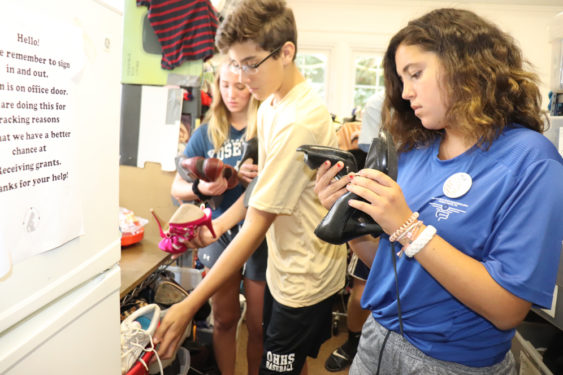 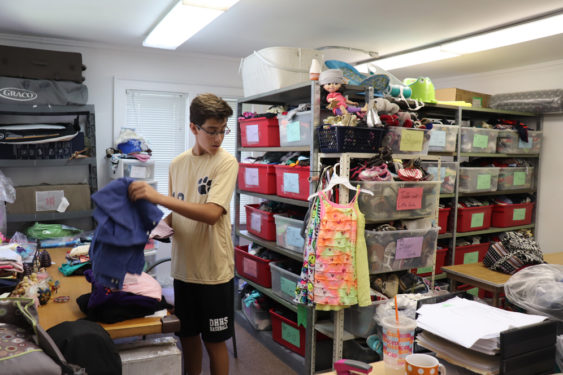 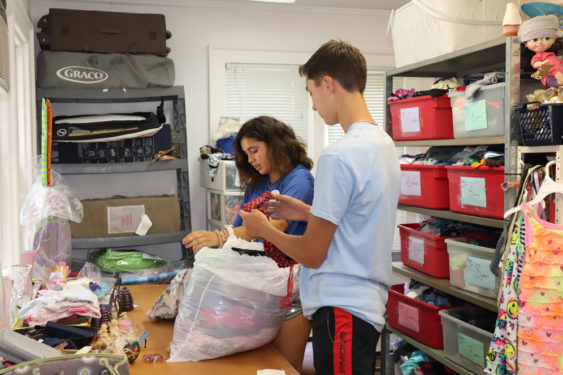 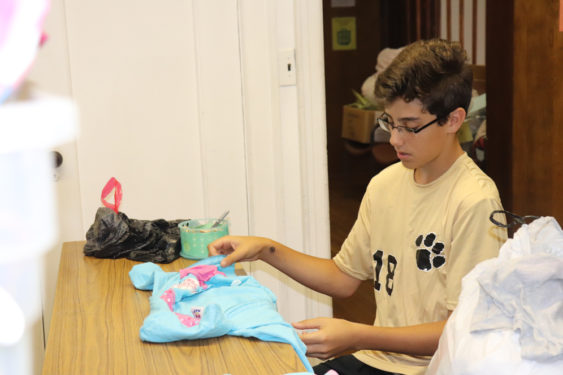 Teens from throughout the Northeast descended upon the Diocese of Brooklyn, July 15 to fold clothes and give kids piggy-back-rides during a week of service organized by Young Neighbors in Action.

Eighty-seven teens and chaperones from five parishes in Delaware, Connecticut and Massachusetts, slept at the Jesus of Nazareth Retreat Center, East Flatbush, and volunteered in 10 different sites throughout the city.

Sponsored by the Center for Ministry Development, a nonprofit in Gig Harbor, Wash., Young Neighbors in Action offers teens nationwide an opportunity to participate in a week-long service trip grounded in faith.

For the group that came to Brooklyn, their work ranged from organizing donated clothes, to painting lockers, to caring for children to staffing soup kitchens, said Sara Nespoli, faith formation director at SS. Simon and Jude, Gravesend, who helped organize the group’s service experience in Brooklyn.

She said she tried to help students meet the people they were serving face to face, but often the jobs that needed to be done required behind-the-scenes work.

One of those jobs was organizing donated material at The Bridge to Life in Flushing. It involved lots of folding clothes, organizing and cleaning.

Ava Lombardi, 16, a parishioner of St. Margaret in Madison, Conn., said her time at the life center was rewarding because she was helping volunteers complete projects that were being pushed off for lack of personnel.

Heartened by Level of Gratitude

Even though she did not get to meet the women that benefited, she was heartened by the gratitude of the people at the center. The Bridge to Lifers even surprised the teens on their last day with bagels, a New York delicacy they had yet to savor on this trip.

Micheal Engelhart, 15, agreed with his fellow parishioner, Lombardi, about the joys of working at the center, but said he was also greatly rewarded by his work in a Manhattan soup kitchen. It was there, he said, that he met a man who had a degree in human behavior, and yet needed the help of the soup kitchen.

“Back at home a lot is expected of us, but we expect a lot in return,” said Michael’s sister, Pamela Engelhart, 16. “But any one of us could end up in these unfortunate circumstances.”

Sasha Nerrey, 18, from St. John of the Cross, in Middlebury, Conn., spent most of her week volunteering with Hour Children, an organization dedicated to helping incarcerated mothers and their children.

She said hat she has often heard the rhetoric that people in poverty deserve what they get. However, her service trip has helped her see the more human and nuanced reality of poverty.

“It’s important not to judge people so harshly based on what you see from the outside,” she said.

A lack of judgment was what surprised Danielle Dorsey, 18, the most about her trip. She came from Resurrection parish in Delaware to volunteer at Bible Camp in Blessed Sacrament parish, Cypress Hills. A group of teens from Young Neighbors in Action joined with the local youth to give the kids of the parish a fun, faith-filled week under the direction of Father Jose Henriquez, parochial vicar.

Dorsey said she expected the local teens to be uneasy around the out-of-state teens. But instead found the teens from the parish to be supportive, kind and loving. She realized they were not that different from the teens in her hometown.

“I never realized how easy it is to make a genuine connection,” said Farrell McGinn, from St. Margaret parish who also volunteered in the Bible camp.

The connection ran deep because God was involved, Dorsey explained.

Ellie Laffargue, 17, who also volunteered at the Bible camp from St. Margaret parish, said she felt there was no judgment at the camp. Campers and volunteers could all sing loudly in praise to God and be silly together in a genuine, love-filled way.

Even language barriers fell away, she said. Some children at the camp did not speak English but that did not stop the volunteers from finding ways to communicate with them.

Camper Justin Marte, 11, said he had lots of fun at camp, but that was not why it was important. The camp’s true value ran deeper.

“We get to talk about Jesus and the Bible,” he said. Adding that the volunteers “help us talk through stuff.”

After their day assignment, the Neighbors in Action gathered back together at Nazareth Retreat Center, where they had time for prayer, group reflection and fun with teens from different states.

Michael Engelhart said he thought this would be the worst part of the trip. He would have elected to just stay with his own parish, if given the choice.

But once he was able to speak with teens from other groups, he began to look forward to the sessions.

“I thought it would be uncomfortable when it wasn’t just our parish, but it just made it better,” he said. “Faith connects us on a deeper level.”

He realized he doesn’t need social media or a phone to make true human connection. “It’s so easy to hide behind social media,” said his fellow parishioner, Sean McAuley, 15. It doesn’t show who people truly are.

Although McAuley, like many of his fellow volunteers, had visited New York City, it was for recreational purposes. He wanted to follow his father’s advice and see the city and its people from a different perspective. The experience has helped him better understand the people living in the city, his peers and himself.

“I feel like we can talk about the real stuff,” she said. Although she was friendly with the teens from her own parish group previously, she said the trip has brought a new level to their friendship because it brought down the images they project of themselves to the world and let them be who they are.

Even simple things like playing card games in the inter-parish groups brought people together in a closeness that goes beyond words.

Hayley DiMeglio, 16, from St. John of the Cross, said the trip also helped her understand the people who were not present at the time with her.

“I’ve learned to appreciate my parents because they worked so hard to get where they are,” she said.