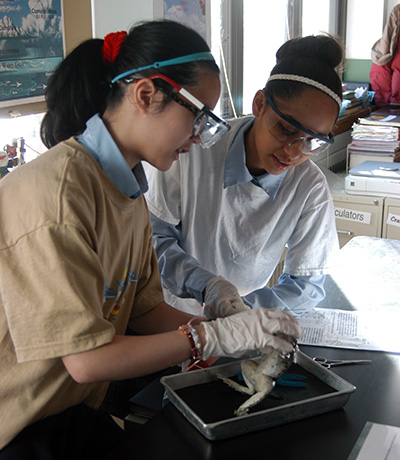 Working in groups, eighth graders at Our Lady of the Snows School, North Floral Park, enjoy hands-on activities in science teacher Remee Mallay’s class. She recently guided students through a life science lesson in frog dissection, teaching boys and girls to look for exterior clues to determine the frog’s sex and then explore the frog’s internal organs, including the stomach to determine their specimens’ last meals. Mallay hopes to give students a leg up on their high school careers. 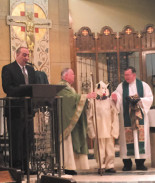 Father Gregory Tatum, O.P. will present “The Passover Sacrifice and the Cross in the New Testament,” a public lecture at St. Joseph’s Seminary and College, Dunwoodie, on Thursday, March 12 at 7:30 p.m.

In his talk, Father Tatum, who is a visiting professor from the Ecole Biblique et Archeologique Françoise, Jerusalem, will consider the following: What did partaking of the Passover Sacrifice entail and mean in the first century? How do the human authors understand the death of Jesus as sacrifice? In what way does the Lord’s Supper make present the Sacrifice of the Cross?

The suggested donation is $25 and those interested in attending are asked to RSVP by March 5.

Two years ago, Roisin was playing at her home in County Mayo, Ireland, when she tumbled   off a couch. At the hospital, doctors found a Chiari malformation in her brain. The prognosis was that Roisin was going to be paralyzed from the neck down.

Her Brooklyn cousins, including Erin Beggan, Bishop Thomas V. Daily’s former receptionist, are organizing a fundraiser for the Roisin Tansey Trust at The Wicked Monk, an Irish pub in Bay Ridge on March 28, 1-5 p.m.

Live entertainment will be provided by John Rafferty and BreezyGrass, a Breezy Point-based folk/bluegrass band. Special appearances by the O’Malley Irish Dance Academy and the Breezy Point Catholic Pipes & Drums.

Guests will be asked for a $20 donation at the door. All proceeds from the door donation, 50/50s and raffles will be given to the Tansey family to help offset their medical expenses in the U.S.

The 10th annual Divine Mercy Conference, co-sponsored by the Marian Fathers of the Immaculate Conception and the Franciscan Friars of the Renewal, will be March 21 at Cardinal Spellman H.S., the Bronx.

Join the TALK. Submit news and photos for Tablet TALK to megiossi@desalesmedia.org.