Twenty-six students from schools in Brooklyn and Queens competed in the finals of the Diocesan Oratorical Contest held on May 16, at Salve Regina Catholic Academy, East New York. Students presented a memorized speech originally given by a historical figure, which ranged from three-six minutes, and were judged on more than a dozen factors including presentation, elocution and the ability to convey the message through their tone and gesture.  The three top placing orators this year are: first place, Aisling McDonagh from St. Luke, Whitestone; second place, Isabelle Hart Crombez, St. Mel, Flushing; and third place, Nirvani Williams, Holy Child Jesus, Richmond Hill.

A number of Holy Cross High School’s football team members came to the Flushing school on a Saturday to play a flag football game with a special needs boys’ flag football team sponsored by PSAL. The game was organized by Student Council adviser and teacher at the school Magaly Lohnes at the suggestion of a colleague, Matthew Artigas whose father is a coach for the team. The young men wore green and gold shirts and had a great time. The sportsmanship and generosity of play of the Holy Cross students were commended by the parents of the PSAL team who brought their sons. All planned on making this a yearly event.

It All Added Up to a Win 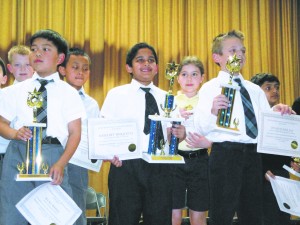 The 18th annual Bishops’ Golf Classic, sponsored by the DeSales Media Group, will be held on Thursday, Aug. 9, at North Hills Country Club, Manhasset, L.I. Proceeds from this year’s event will benefit Diocesan Migration Services in Brooklyn and Queens. Msgr. Martin Geraghty, pastor of St. Robert Bellarmine parish, Bayside, will be honored as the Pastor of the Year. Other honorees include the members of the Board of Directors of the DeSales Media Group. Sponsorships and registration information can be obtained by calling Kim at 718-499-9705, ext. 362.

Welcome to our world, Joseph William Wos, the first child of Tablet reporter Marie Elena Giossi and her husband, Daniel Wos.  Joseph was born on Easter Sunday and is doing well.  Giossi will be rejoining the staff at the end of July.

It’s not too early to begin preparing now for the Diocesan Marian Pilgrimage to the National Shrine of the Immaculate Conception in Washington, D.C., on Saturday, Oct. 27.  Bishop Nicholas DiMarzio will lead the pilgrimage which is sponsored by the Diocese every two years.

In recognition of those who were the driving force in the creation of Dominican Village in Amityville and those who have served on the Board of Directors over its 20-year history, a “Family Tree of Love” has been placed at the entry of the Amitycenter at Dominican Village. The wall art includes the names of 90 persons “whose vision inspired it and whose stewardship sustained it.” From right are Kerry Mahon, Chairperson of the Board of Directors; Kay McKiernan Chairperson of the Development Committee; Sister Mary Casey, O.P., Vice President for Operations; Sister Mary Hughes, O.P., Prioress of the Sisters of St. Dominic; and Ken Ruthinoski, President/CEO of Dominican Village.