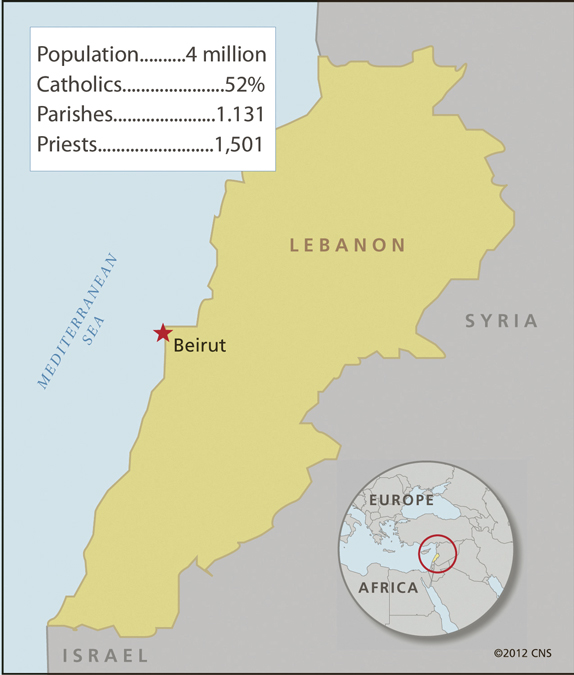 VATICAN CITY (CNS) – When Pope Benedict XVI travels to Lebanon Sept. 14-16 — assuming spillover from the civil war in neighboring Syria doesn’t force a last-minute cancellation of the trip — his purpose will be above all pastoral, and, as usual for papal trips, most of his remarks will focus on the spiritual.

Yet as the Syrian conflict exemplifies, the concerns of Christians in the Middle East are in many respects inseparable from politics, and however diplomatically the pope may word his statements, some will inevitably touch on the region’s political struggles and tensions.

Pope Benedict’s primary reason for visiting Lebanon is to deliver his document of reflections on the 2010 special Synod of Bishops, which was dedicated to Christians in the Middle East. At that gathering, bishops spoke out on a range of issues that included the Israeli-Palestinian conflict, the rise of Islamic fundamentalism, dialogue with Islam and Judaism and the emigration of Christians driven by persecution, military conflict and economic hardship.

Bishops at the synod also affirmed the value of “positive secularism” and of an idea of citizenship that recognized a person’s full rights and responsibilities in society without reference to religious affiliation. According to Michael La Civita of the Catholic Near East Welfare Association, these are strikingly new concepts for the region, where sectarianism still dominates public as well as private life.

Pope Benedict may draw on the bishops’ vocabulary of secular citizenship when he addresses Lebanon’s political, religious and cultural leaders in the presidential palace Sept. 15. He is also likely to renew his earlier calls for the protection of religious minorities. That cause has become an increasingly urgent one for Christians in the Middle East since the start of the Arab Spring, a revolutionary wave that started in December, 2010, leading to the fall of dictatorships in Tunisia, Egypt, Libya and Yemen and currently threatening the government of Syria.

Though they profess no love for the old regimes, many Middle Eastern Christians fear that revolution has further empowered Islamist extremism in the region, increasing the danger of attacks and persecution of the sort that Iraq’s Christians have suffered since the fall of Saddam Hussein.

According to Habib Malik, a professor of history at Lebanese American University, the pope in Lebanon will find an especially receptive audience for any talk of minority rights, since the country’s Muslim and Christian populations are both composed of a variety of smaller communities, and moderate Muslims there are also “scared of the radical elements in their midst.”

Yet, Pope Benedict knows from experience how sensitive a topic this is. In January, 2011, after the pope denounced killings of Christians in Egypt and called for the protection of religious minorities, the Egyptian government recalled its ambassador to the Holy See, and the most prestigious university in the Sunni Muslim world, Cairo’s al-Azhar University, suspended its interreligious dialogue with the Vatican.

An even more delicate topic for the pope during his visit will be the Syrian civil war. Some Christian leaders have opposed the fall of President Bashar Assad, and the Vatican has yet to take a stand on proposals for outside military intervention to end the fighting.

In Lebanon, the pope will also confront the sensitivities and complexities of local church politics. Historically a refuge for Christians in the Middle East (with a Christian population today of nearly 40 percent, the largest proportion in the region), the country is home to at least a dozen major Christian churches, including Eastern Catholics in communion with Rome, Orthodox and Protestants.

At the 2010 synod on the Middle East, bishops affirmed the importance of preserving the variety of ancient traditions of Eastern Catholicism, whose survival is especially threatened by emigration; but the bishops also warned against the dangers of confessionalism: an attachment to distinct identities in a spirit of tribalism that undermines Christian unity.

Even as he addresses Christians who are now a minority in a country where they once predominated, Pope Benedict will also be speaking to a global audience. So he may choose to draw or suggest parallels between the church’s situation in the Middle East and that in other parts of the world.

The Lebanon trip comes less than a month before the pope opens the world Synod of Bishops on the new evangelization, a project aimed particularly at revitalizing the church in an increasingly secular West. For Bishop Gregory J. Mansour, who leads Maronite Catholics in 16 states on the East Coast of the United States, the Christian minority in the Middle East sets an example for the new evangelization through its network of social services, including schools and health care facilities.

Such services are extensively used and highly valued by the region’s Muslim majority, Bishop Mansour notes, and thus constitute a powerful though nonconfrontational form of witness. Yet the bishop says that the long and arduous experience of Middle Eastern Christians also holds another lesson for Christians in the west and particularly in the United States: “Don’t be silenced by anybody.”

“We deserve a robust freedom of religion, freedom of conscience, freedom in the city square,” the bishop said. “The message of Christians in the Middle East is not to be silent.”