The street that a fallen hero grew up on now bears his name. Last week, 40th Street between 4th and 5th avenues in Sunset Park was renamed for FDNY Marine Pilot Thomas P. Phalen.

Phelan was 45 when passed away in March 2018. He is remembered for his heroic actions during the terrorist attacks on Sept. 11, 2001 and the countless lives he was able to save, as well as his years of service in the FDNY and to the City of New York.

Phelan was working as a captain on the Circle Line Statue of Liberty ferry cruises when the Twin Towers were attacked. He turned his boat into a lifesaver and set out to help as many people as he could. It is believed that he saved hundreds of lives through his heroic acts.

“This will keep his name alive and that is very important to the family,” he said. 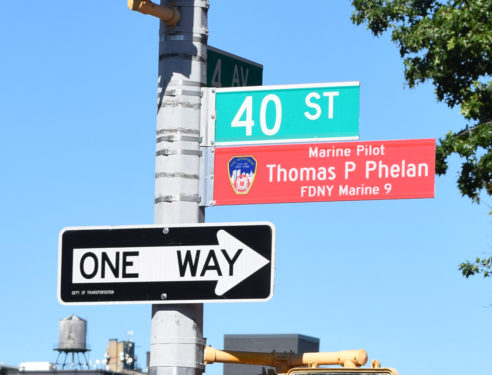 “He doesn’t need much help keeping his name alive, but now for generations to come they will see the sign and his name and think of who he was.

“He was a true hero and to be able to honor him and have his name up there forever is the least we can do.”

Also present was Father Kevin Sweeney, pastor of St. Michael Church, Sunset Park, where Phalen was raised and was an active parishioner. Father Sweeney was a personal friend of Phelan and felt honored to be able to remember him in such a way.

“We remember a true hero but also a man of great faith,” he said.

“He was someone that was always smiling and always ready to help anyone who needed it.

“His actions on 9/11 and then his service in the FDNY will be remembered for ever. Everyone who met him loved him and he will never be forgotten,” he said.