More than 35 years ago, Father Tom Joyce, then-pastor of Our Lady of Perpetual Help Church, Sunset Park, asked John and Mary Coughlan to help him with a project. He wanted neighborhood kids to have a field where they could run and play while staying out of trouble and learning the value of teamwork and sportsmanship. 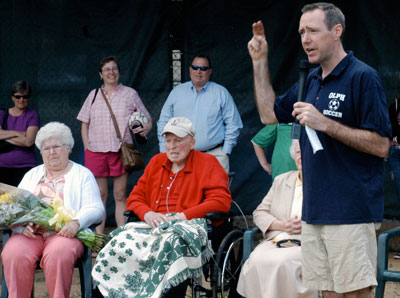 Last Saturday morning, John, now 78, and Mary, 74 – who will be married 53 years next month – were honored for fashioning that field from an overgrown, debris-filled lot, and founding the O.L.P.H. Soccer League, which continues to serve 200 children annually.
Dozens of pint-sized soccer players and their parents as well as the couple’s family and friends gathered for a recognition ceremony inside the field, named in memory of Father Tom Joyce, and located under the Gowanus Expy. on Third Ave. between 63rd and 64th Sts.
Sun shone upon the freshly cut grass, where boys and girls chased soccer balls while Irish music filled the air and sausages sizzled on a nearby grill.
Bagpipers opened the ceremonies at 10 a.m., leading the Coughlans, followed by a parade of children, to a clearing in the field. Mary walked alongside John, who is battling cancer and bound to a wheelchair, as one of their sons wheeled him into the shade.
An immigrant from Co. Kerry, Ireland, John is a U.S. Army veteran. After serving his country, he worked as an MTA motorman and was a transit workers union member.
Mary, who was raised in the parish and attended the parish school, married John in O.L.P.H. on July 5, 1958. For decades, they lived on 58th St., where they raised nine children, all O.L.P.H. alumni. They have been blessed with 25 grandchildren.
Though the Coughlans moved to Manchester, N.J., more than a dozen years ago, they regularly return to the old neighborhood to see relatives and friends, dine at favorite restaurants and stop by the ball field.
Although they had their hands full with work and raising nine children, the Coughlans and other local families stepped up to help Father Joyce convert the vacant eyesore, which the church leased from the state, into a thriving sports field.
“All of these families became an extended part of our family,” noted Kevin Coughlan, the couple’s fourth oldest child. “They sacrificed a lot of free time and weekends to set this up and they never complained.”
Jerry Daly was among the parents who worked for “days and weeks and months and years” to fix the lot, which originally had a downward slope. Risers, transported from the Second Ave. railroad yards, were used to level the ground, along with truckloads of rocks and dirt. He recalled spending Friday evenings mowing the grounds with John Coughlan and other fathers.
When the field was fit for use, parents launched a baseball league, 1976-77 – registering youngsters, teaching them how to play the sport, coordinating practices and game schedules and training coaches and referees, oftentimes serving as both.
John Couglan was a coach and director, though the only sports he knew were Gaelic football and soccer, which was added to the league the following year.
Having begun this endeavor with no funding, Mary organized fundraisers, including Irish dances, which drew 500-600 guests, to cover costs. During the off-season, she washed every child’s uniform.
As the league expanded, the Coughlans worked to improve the field with the addition of a scoreboard, sprinkler system and field house. Registration fees covered other needs, including a chain-link fence.
For their efforts, they neither sought nor received any rewards – financial or otherwise. “They were just happy to see the kids play,” Kevin said.
In recent years, the baseball program has fallen by the wayside but soccer is still kicking with spring and fall sessions accommodating 200 boys and girls, ages four-13, each year.
Kevin said his dad’s “happy that he knows the kids – adults now, who are running the league with their kids.”
Among those now grown-up kids is Bay Ridge resident, Martin Brennan, state director for Sen. Charles Schumer and president of O.L.P.H. Sports. His late father — NYPD Capt. Patrick Brennan — also played an instrumental role in bringing the field to fruition.
Brennan organized the recognition ceremony for the Couglans and explained to those gathered how a handful of “incredible families accomplished the local community equivalent of building the Egyptian pyramids. … With the love they had they literally built this field out of nothing.”
Father Francis Mulvaney, C.Ss.R., blessed the couple for their efforts tending to the field, where generations of families and friends foster well-being and fellowship, he said.
Children presented the couple with construction-paper thank-you cards and Mary received a bouquet of yellow roses.
Brennan announced that a permanent sign would be erected with the Coughlans’ names as founders of the field.
“Their spirit of dedication to creating a wonderful environment for children to learn the sport of soccer – and learn the timeless life lessons of competition and teamwork and respect and having fun – still guide the league today,” Brennan said.
He expressed his hope that the children sitting before him would eventually carry on this legacy.
Second-grader Courtney Haywood might just be the one to do it. Asked if she liked soccer, she said, “I don’t like soccer,” and paused before exclaiming loudly, “I love soccer!”
Seeing the field full of children, laughing and kicking around a well-scuffed soccer ball, a tear rolled down John Coughlin’s left cheek.
“It’s wonderful,” he said. “This means a lot to me.”