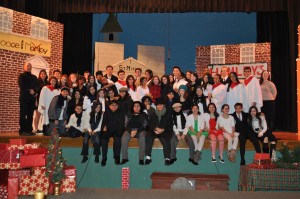 The Drama Guild from St. John’s Prep., Astoria, performed its annual rendition of Charles Dickens’ A Christmas Carol before a record audience.

The St. John’s Prep students, faculty, and staff in attendance were joined by several local Catholic elementary schools to view this delightful performance.

Under the direction of faculty members Michael Matthews, Jason Booth, and Mary Radus, members of the Drama Guild brought this classic tale to life in the school’s auditorium.