In the 92nd playing of the annual CHSAA ‘AA’ Intersectional Basketball Championship on March 10, the Royals battled to a hard-fought 61-56 victory over Archbishop Stepinac H.S., White Plains, N.Y., at the historic Rose Hill Gymnasium on the campus of Fordham University, the Bronx.

The win marks Christ the King’s first city championship win since 2015. From 2010-2015, the Royals won five of six city titles.

Christ the King turned in a strong regular season, finishing 18-10 overall and 10-6 in league play. However, an injury in January to junior guard Quaran McPherson – a CHSAA All-League player who averaged a team-high 19.0 pts. per game this season –raised questions as to how the Royals would fare in the playoffs.

Normally a fixture in the Brooklyn-Queens diocesan championship game, the Royals were on the outside looking in as Bishop Loughlin H.S., Fort Greene, defeated Xaverian H.S., Bay Ridge, for the diocesan crown.

Christ the King though had a statement win over Bishop Loughlin in the city semifinals to send the team to the title game against the defending city champion Stepinac Crusaders.

An 8-2 run by Stepinac to close out the first quarter gave the Crusaders a nine-point lead after the opening frame. That lead increased to 12 early in the second quarter on hot outside shooting by junior guard R.J. Davis and sophomore guard Adrian Griffin Jr. – two of the top three scorers in the ‘AA’ Division during the regular season.

Stepinac led by eight, 39-31, when the first-half buzzer sounded. Davis contributed 20 of his team’s 39 first-half points on 6-of-8 shooting to go along with five rebounds and three assists.

The Royals struggled from the field in the first half, missing all seven of their 3-point attempts. Meanwhile, Stepinac managed to shoot 5-of-11 from downtown, which allowed the team to maintain the lead for 15:02 of the first half compared to just 24 seconds for the Royals.

“We just had to fight back,” said sophomore guard Sterling Jones. “In the first half, we missed a lot of shots. We just had to come in and make shots and just play through to it.”

The Crusaders continued to knock down big shots as the third quarter began and opened their largest lead of the game at 14 pts. at the midway point of the quarter. Christ the King though finally began heating up from the field.

Junior guard Ryan Myers, who averaged 16.2 pts. per game during the regular season, drained a rainbow 3-pointer – the first of the game for the Royals – which began the upward climb of getting back into the game. After three quarters, Christ the King was down seven.

Myers immediately hit another three to start the fourth quarter. Trailing by five a few minutes later, Myers again connected from beyond the arc to make it a two-point game midway through the final frame.

The Royals kept chipping away, and a free-throw from Myers tied the game at 56 with 2:30 to play. That was the first tie since the opening score of 0-0 for the first 13 seconds of the game.

With one minute remaining, Christ the King took the lead on an emphatic dunk by six-foot-11-inch sophomore forward Moussa Cisse. It was the team’s first time being ahead since leading 8-7 in the first quarter.

Jones followed up Cisse’s dunk with an athletic play to find junior guard Lovell Smith for an easy layup to seal the five-point victory. 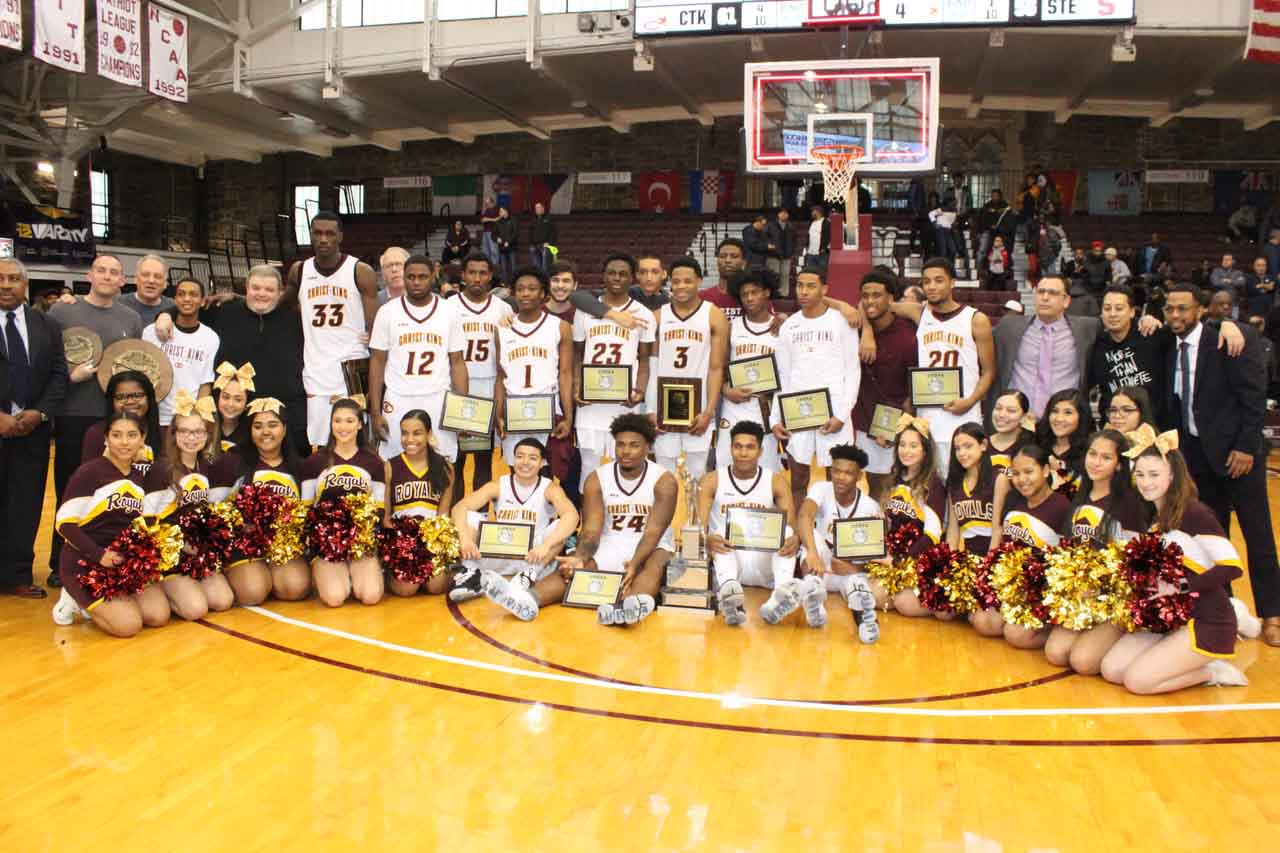 Christ the King outscored Stepinac 16-4 in the fourth quarter. Those four points from the Crusaders all came on free-throws, as the team was held to 0-for-17 shooting in the fourth.

“We’ve been through adversity all year taking some tough losses,” said Myers, who also was named to the CHSAA All-League team. “But we believed in each other and knew we were going to win the game regardless.”

Myers finished with a team-high 19 pts. – 12 of which came in the second half – and three rebounds en route to being named M.V.P. of the CHSAA ‘AA’ Intersectional Playoff Tournament.

“Ryan’s going to make shots,” said Christ the King head coach Joe Arbitello. “I thought he did a great job on R.J. (Davis) in the second half too. I thought he came up with some key rebounds and some key defensive efforts. The shots he’s always going to make.”

“Nobody thought we were going to win,” Jones said. “We came in as the third-seed, and we came out with the ‘W.’ It’s my first year playing varsity, and I already got a city championship.”

“It’s the Christ the King way,” said Arbitello, who has now won six city championships as the Royals’ coach. “We’ve been there. I knew this group was special. These guys are tough, tough kids.”

The Royals now move on to the New York State Federation Tournament to be played March 22-24 at Cool Insuring Arena in Glens Falls, N.Y.