Msgr. John T. Peyton dedicated his life to the people of East New York, and so it was fitting that the street outside St. Rita Church, where he served for over 25 years, was dedicated in his memory last Sunday – the day before what would have been his 80th birthday.

Dozens gathered to witness the renaming of Shepherd Avenue, between Atlantic and Liberty avenues, to Msgr. John T. Peyton Avenue. City Councilman Rafael L. Espinal, who introduced the bill to rename the street, led the unveiling ceremony. Among the crowd were clergy, family members and parishioners, past and present.

The late monsignor served the parish and community from 1982 until his death from a heart attack in February, 2008.

“His heart and soul were here at St. Rita’s,” said Maureen Peyton, the late priest’s sister, who traveled from her home in Naples, Fla., for the dedication ceremony. “The happiest years of his ministry and his priesthood were spent here.”

Also present were some of the monsignor’s cousins, including the Sullivans of Massapequa, L.I., and Bayonne, N.J., and Mercy Sisters Bernadette Wynne and Anne Connor.

Though she didn’t think her brother would like all of the fuss, Maureen Peyton said, “I am blessed to be here with you to thank you for this honor to him.”

She helped the councilman and Father Luis Laverde, St. Rita’s pastor, pull the paper wrapping from the newly installed green sign with white lettering, which Father Laverde then blessed with holy water.
“Msgr. Peyton is alive today,” exclaimed Dario Matos, parish music director. “He was a friend, a father, a brother to us, and we believe he’s still with us – every day and at every Mass.”

Lasting Legacy
A man who saw needs and sought to address them, Msgr. Peyton changed the face of East New York through his commitment to helping the working poor with social services, including immigration, health care, education and housing. He started a soup kitchen, adult literacy programs and a youth center, but his lasting legacy was the building of the Nehemiah Houses, which enabled parishioners and residents to purchase their own homes.

“(Msgr.) Jack Peyton lived his life in service to other people,” said Father Jim Sweeney, a friend of the late priest. He shared that Msgr. Peyton inspired his priesthood and “inspired me to think about other people because his whole life was about other people.”

“Today we celebrate a man of compassion and love who committed his life to being of service to others,” the councilman said. “It is my hope that this token of appreciation to Msgr. John Peyton will be an expression of how much he meant to this community and to the hundreds of lives he touched during his lifetime.”

Raised in St. Rita parish and a former altar boy, Espinal counts his life among those shaped by Msgr. Peyton.

“I actually got my first job from Msgr. Peyton working in the rectory at the age of 14,” he said.
When Espinal graduated from college, Msgr. Peyton guided him toward public service by helping him secure a job at a local politician’s office. Espinal went on to the state assembly and now the city council – achievements he attributes to the late priest’s example.

“Msgr. Peyton was an honest man, a hard-working man and an effective leader,” Espinal said. “He always had a good relationship with the community and looked out for young people like myself.”

Though future generations will not know the person of Msgr. Peyton, his name will continue on Shepherd Avenue, where St. Rita’s Church continues to serve the many needs of poor and immigrant families in East New York. 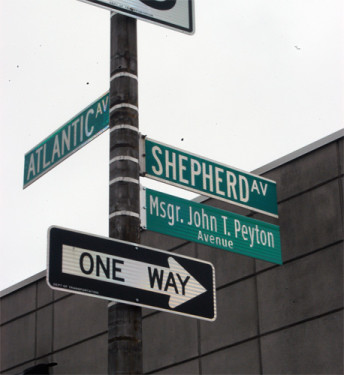 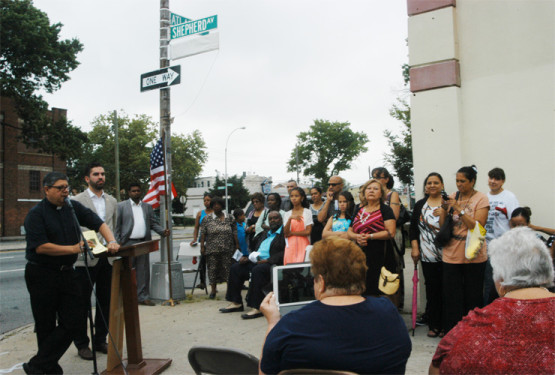 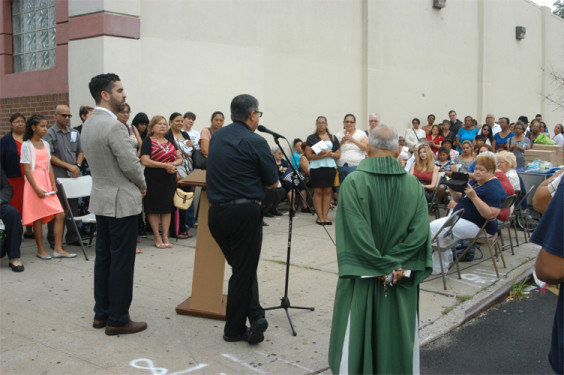 Corner of Shepherd and Atlantic Aves. in East New York 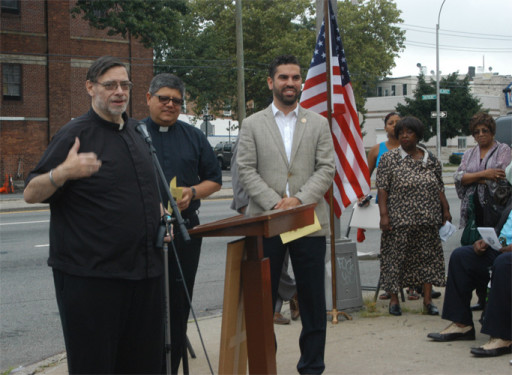 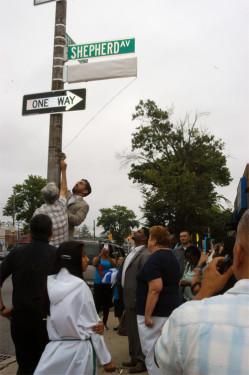 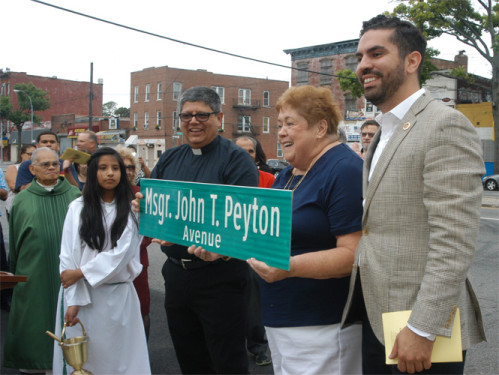 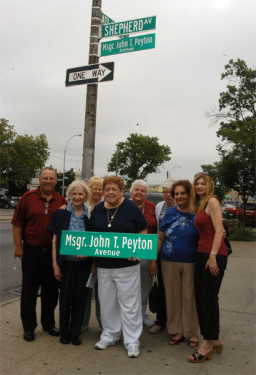 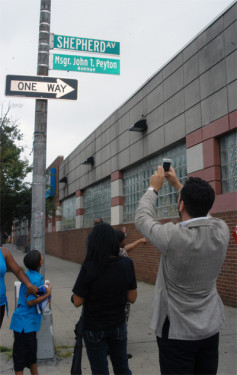 Councilman Espinal Snaps a Photo of the New Sign