As always, Carnesecca was a true gentleman. At the end of the night, a 10-year-old girl asked the coach to sign her program. “To Joanne, Best Wishes, Lou Carnesecca,” the signature read.

The girl – St. John’s head volleyball coach Joanne Persico – still has that program. What’s even more fitting is that the girl now has more total wins at St. John’s than the legendary coach himself.

“His (Carnesecca’s) banner has been hanging over my head since my first day there,” Persico said. “So I’ve seen it every day for 29 years.” 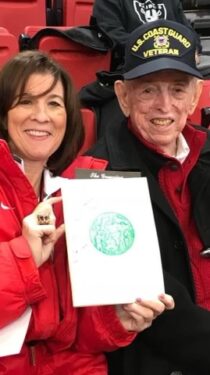 Persico founded the St. John’s volleyball pro- gram and was the first – and only – head coach. Her days playing CYO volleyball, basketball, swimming, and softball at St. Gregory the Great led her to pursue a career in coaching.

In high school at St. Francis Prep, Fresh Meadows, she played basketball, tennis, and volleyball all four years before graduating in 1984 and playing volleyball at Syracuse University, N.Y. She was an inaugural member of both the GCHSAA Hall of Fame and Red & Blue Terrier Ring of Honor, in addition to being induct- ed into the Syracuse Hall of Fame.

While working for Cablevision after college in 1994, Persico saw an ad in The Tablet saying that St. John’s wanted to form a volleyball pro- gram. She interviewed with the late Athletic Director Jack Kaiser and Senior Deputy Athletics Director Kathleen Meehan and got the job.

“I had never been a head coach before, but I was a setter on the volleyball team, which is like the quarterback,” Persico said.

The first order of business was to install a volleyball net in Alumni Hall, which required drilling holes into the hardwood court. She approached Carnesecca for his blessing. Though he was no longer coaching at the time, he of course was still heavily involved in all things St. John’s athletics.

In their first-ever season, the Johnnies post- ed a 10-25 record and went winless in Big East Conference play. Yet just a year later, St. John’s won 24 matches and earned a bid to the conference tournament. Improvements year over year have led to six Big East championships, three appearances in the NCAA Tournament – including a Sweet 16 berth – and Persico being named Big East Coach of the Year twice. Through it all, Carnesecca remained a guiding force.

“There’s a saying that the student that doesn’t pass the teacher fails the teacher,” Persico said. “Coach Carnesecca became a great mentor and a great friend to me. I call him ‘The Godfather.’ He’s been a part of my life and a part of my journey and has taught me so many things.”

After the victory over Appalachian State, Persico called the 97-year-old coach to thank him for everything. She also told him she recorded career win No. 527.

As she gears up for her 29th season leading the Red Storm, Persico will continue to seek the guidance of a true sage: Coach Carnesecca. Learning from one of the best has helped Persico build her successful program, known just as much for graduating 100 percent of her student-athletes as it is for its competitive nature on the court.

“In the end, I know that God doesn’t care about the wins,” she said. “He just cares about how I impacted these young women on the team.”