QUEENS, N.Y. (March 25, 2014) – Sophomore guard Aliyyah Handford was honored as an All-Region I selection as announced by the Women’s Basketball Coaches Association on Tuesday afternoon after leading the St. John’s women’s basketball team in scoring all season and guiding the Red Storm to its fifth-consecutive NCAA Tournament appearance. The Newark, N.J. native has enjoyed a record-breaking campaign and has already been named to the All-BIG EAST First Team and BIG EAST All-Tournament Team.

The selection committee will select the 10-member Division I Coaches’ All-America Team from the 52 All-Region candidates. Handford is one of five BIG EAST student-athletes on the Region I list.

“We are very pleased to hear about this great accomplishment for Aliyyah,” stated head coach Joe Tartamella. “It’s a testament to her hard work and to her dedication to the sport. We look forward to her continuing to be a major part of our program over the next two years. We all congratulate Aliyyah on this accomplishment.” 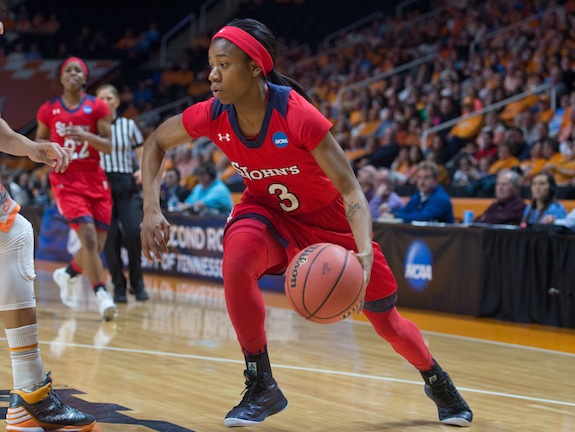 Handford is St. John’s top scorer at 16.7 points per game, which ranks fifth in the BIG EAST, and posted the first two double-doubles of her career this season. Handford, who averaged 25.0 ppg over two games in the 2014 NCAA Tournament, broke the program’s 38-year single-season record for most points by a sophomore. Handford has 567 points this campaign and ranks fifth in the conference in field goal percentage with a 48.3 percent mark. Despite her designated position as a guard, Handford is also 16th in the conference in rebounding, pulling down 5.1 rebounds per contest. Handford has established herself as a defensive stalwart in her sophomore campaign as she paces the team with 2.0 steals per game, good for fifth in the BIG EAST.

A product of Malcolm X Shabazz High School, Handford has 11 20-plus point scoring outings this season, including a career-high 32-point outburst in the second game of the season against Iona. She provided one of the highlights of the Red Storm’s season when she scored the game-winning basket with 2.8 seconds remaining in regulation to down No. 24 Texas A&M in the Maggie Dixon Classic at Madison Square Garden on Dec. 22, capping a 27-point performance. Handford also had the best BIG EAST scoring game of her career with 25 points against Villanova on Feb. 15 and averaged 18.7 points, 5.3 rebounds and 3.3 steals in the 2014 BIG EAST Tournament.

Handford is the seventh Region I All-American selection in the history of the program. Nadirah McKenith and Shenneika Smith, the first St. John’s players to be selected in the WNBA Draft, were named last season after stellar senior campaigns.