SHEEPSHEAD BAY — The robotics team at St. Edmund Preparatory High School (SEP) is anxiously waiting to hear if it will be moving on to the final round of an international competition.

In mid-April, the SEP ‘Nerd Herd’ team was named one of the 40 semifinalist teams in For Inspiration and Recognition of Science and Technology’s (FIRST) all-new Innovation Challenge, launched this year in response to the pandemic.

FIRST is a robotics community that prepares young people for the future through inclusive, team-based robotics programs for pre-K through 12th grade through in-school or after-school programs.

About 10 percent of participating teams made it to the semifinal round. The Top 20 finalists who will participate in the final round of the FIRST Global Innovation Awards will be announced by the end of May, with winners announced in late June.

Typically, SEP team members would have met together after school three times a week. Due to the pandemic, however, some students have been learning under the hybrid model while others have been entirely remote since September.

“But, FIRST came up with this Innovation Challenge, which was a fully remote competition,” explained Erica Barbieri, who has been the team’s coach for the last decade. “Because a team like ours couldn’t physically meet to put our robot together, the students had an opportunity to compete a different way.”

Teams participating in the Innovation Challenge had to identify a problem related to people not being active enough, research the problem, and design a new piece of technology or improve an existing one. 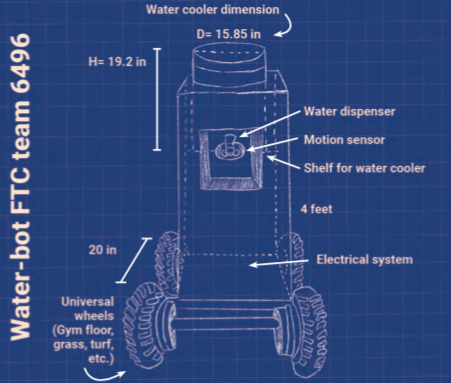 Inspired by the current moment, the team’s nine students envisioned a “water-bot” that could dispense 10 gallons of water and eliminate hands-on contact for student-athletes who need water during games and practices. They argued in their “business pitch” that it could help bring back sports to young athletes in a post-pandemic world.

“We usually share this big water jug that all of our teams share — and a lot of other schools do this as well,” explained Erin Nilan, a goalie on the high school’s hockey team and the robotic team’s only junior member this year. “That poses a lot of risk for not just COVID-19, but in general with germs.”

Senior, and team captain, Frank Louie served as the project manager, assigning students different tasks, preparing slides that would be presented to a panel of judges, and compiling a two-minute video for their multimedia business pitch.

“We did our best together for this, as we do with everything, but it was harder to do everything online because we had to find everybody at the right time and place,” Louie said. “So, it was honestly very exciting for us to hear that we made it to the semifinals.”

Given the circumstances, Barbieri was proud of her team and compared them to a small start-up company.

“We weren’t sure what the outcome was going to be because we never did anything like this before, but they were thrilled to be recognized,” she added.