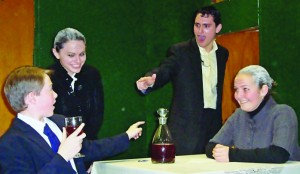 The hilarious comedy tells the story of two sweet old ladies in Brooklyn who poison lonely old men in what they believe to be an act of charity.  The women are part of an eccentric family that also includes a sadistic, psychopathic nephew, a nephew who believes himself to be President Theodore Roosevelt, and worst of all – a nephew who works as a theater critic.

The production was directed by teachers Peggy McEvoy and Scott O’Donnell.  Anthony Feliciano and Carine Alexis beautifully portrayed the romantic leads, while Jenna Kahn and Jessica Pinto were hilariously believable as the two sweet, but deadly, spinsters.  Of special note was Eileen Makak’s brilliant portrayal of Jonathan Brewster, the murderous nephew of the women, who happens to have a face just like Boris Karloff’s.

McEvoy and O’Donnell will be directing a musical in the spring.