Wide-eyed students from St. Anselm Catholic Academy in Bay Ridge received a special visit from members of the U.S. Coast Guard on June 5.

“They go on lots of missions, and they protect the community. That’s a really good job,” said Hayes Brennan, a first grader whose parents serve on the U.S. Coast Guard’s Safety and Security Team.

His father, Commander Devon Brennan, explained the Coast Guard’s mission to the children.

“We’re an organization of service, which is certainly something they’re learning at St. Anselm, to give back. That’s something we want to showcase today.” 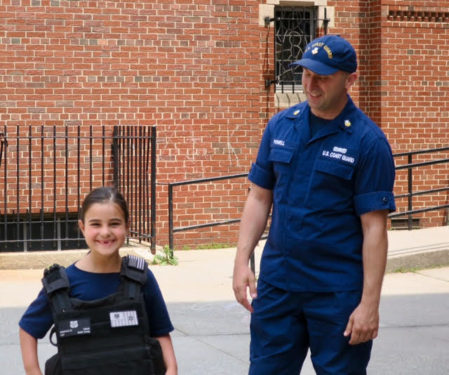 Students from kindergarten through second grade got hands-on experience by touring response boats, which protect ports and harbors around the world. The children even got to try on Coast Guard gear.

“The Coast Guards wear a lot of armor, and they are very trained,” second-grader Casey Downes said.

That training was on full display, as the K-9 unit demonstrated the process of sniffing out explosives with K-9 officer ‘Ruthie.’

“It was cute, and it did tricks!” said Katherine Cassidy, a kindergarten student.

She may only be 5 years old, but Katherine already has some understanding of the Coast Guard’s mission. “They could save people once they’re in the water,” she said.

Commander Brennan saw the school visit as a way to teach children how the country is protected.

“This is an opportunity that, at the end of the day, we’re just people just like them. We made a choice to serve our country and to serve a bigger purpose than just ourselves,” he said.

It’s a choice his son, Hayes, is thinking about making for himself.

“My mom and dad have been in the Coast Guard since I was born. And all the stuff here is really cool, and I would like to save people,” Hayes said.

Hayes and his classmates learned rescue tactics and how to follow the Coast Guard’s motto – “always ready.”