By Antonina Zielinska and Oleg Vrednik

A sea of red descended upon Times Square on the Friday before Pentecost.

Worshipers, mainly from the Diocese of Brooklyn, came to share the joy, power and love of the Holy Spirit at the crossroads of the world, donning red T-shirts in honor of the Paraclete.

They came armed with rosaries, statues of Mary and Joseph holding baby Jesus, a cross draped in white and the fire of the Holy Spirit that consumed their hearts. They prayed with the tourists, the drunk people hanging out in party-central and the entertainers dressed in Statue of Liberty and Elsa costumes. The group welcomed anyone who would leave a crack in their heart for the Love of God.

Juan Perez, who works for the Diocese of Brooklyn in the Holy Spirit Institute for Service and Leadership, organized the event. He said he was deeply moved by what one of the costumed workers said to him during the event. The worker came to ask the group to pray for him and explained that he has not been able to go to church.

“The Church came to me today,” Perez recalled the man saying to him.

Perez said he was amazed at how the people embraced the Good News. He said random people hanging out and smoking marijuana stopped what they were doing and joined the group in prayer. People from around the world stopped at the feet of the statue of Mary and asked if the group was Catholic, many thanking them for coming out to celebrate.

“It was powerful,” Perez said.

All in all, Perez said there were about 2,000 worshipers, including those who joined serendipitously. That is a big increase from the approximately 500 people who attended the inaugural event last year. Perez said he hopes this will become a staple for the diocese every year and that it will continue to grow in scope. He said he is also thankful to the city, and especially Mike Dugan, from the community affairs office of the Midtown North precinct, for helping with all the logistics necessary to organize the event. 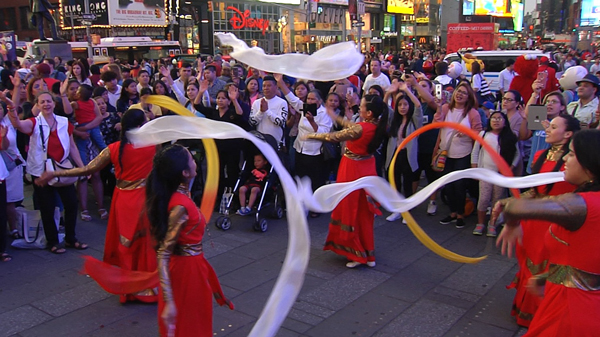 Aside from praise and worship, the group also gave witness. Angie Vargas presented a 30-minute testimony, sharing with all her experience of sexual abuse as a child, her neglect at the hands of her family and her personal encounter with Jesus who brought her to Him. Vergas now works for the Diocese of Paterson in New Jersey.

“So many people don’t know about God,” said Yangely Rojas, from the Newark, N.J.-based liturgical dance group Adoradoras en Espiritu y Verdad, which translates from Spanish to Worshipers in Spirit and Truth. The group was invited by the Diocese of Brooklyn to participate in Times Square.

Rojas said she believes the event helped people have an encounter with God and said being able to bring her ministry out of the Church and into the streets where the people are has had a powerful effect.

“We praise Him through every movement, through every step that we do,” she said. “When you are out in the streets praising the Lord, people feel that, people feel the Holy Spirit, and they just want to come closer and see what’s that peace that maybe they are feeling, or maybe that excitement.”

“We’re doing what Pope Francis wants us to do: to come to the streets, bring Jesus to them,” said Ashley Mejias, who came to the event from Queens. “I just want to see people with God, loving God.