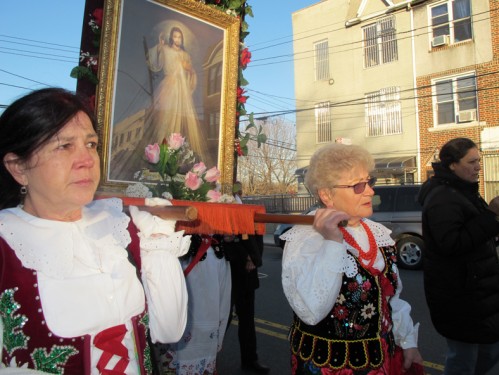 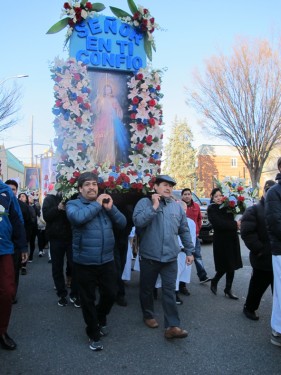 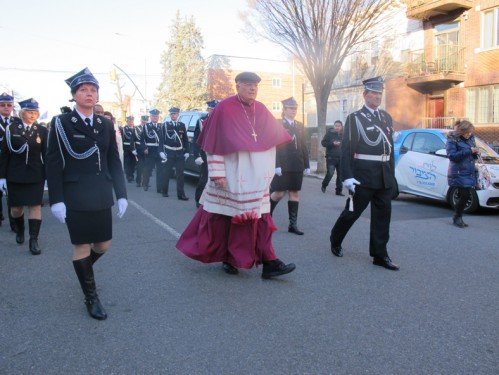 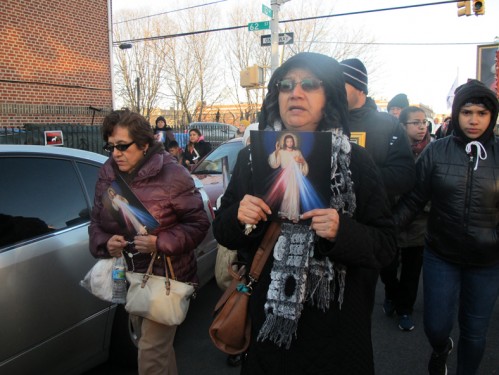 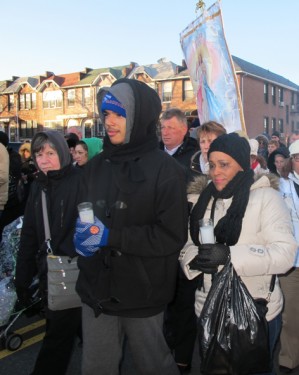 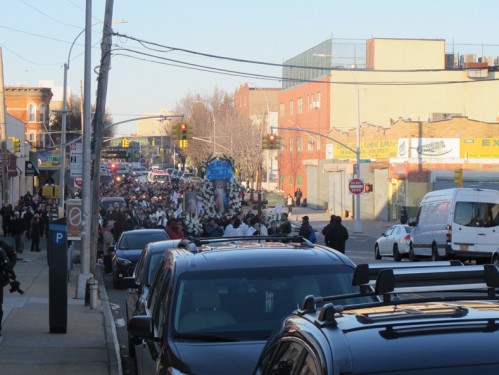 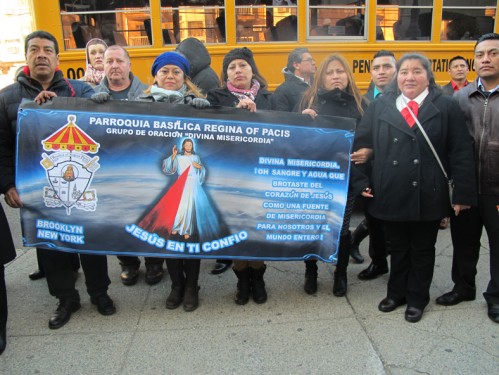 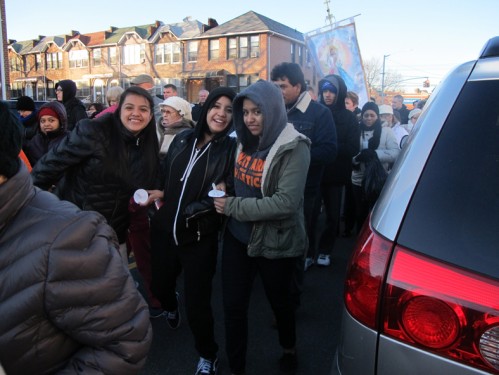 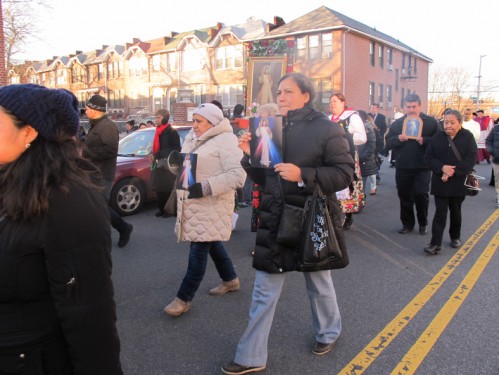 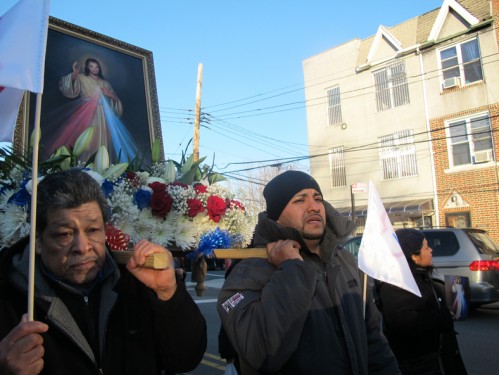 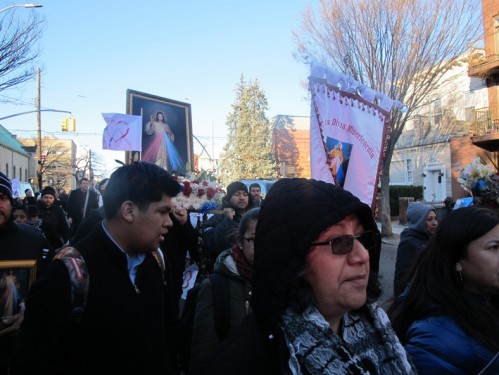 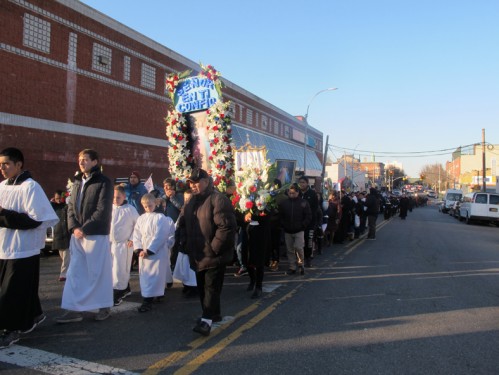 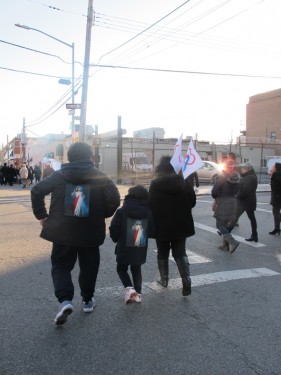 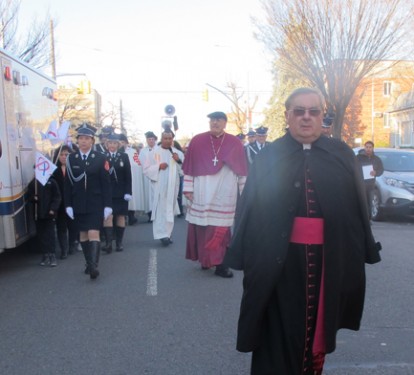 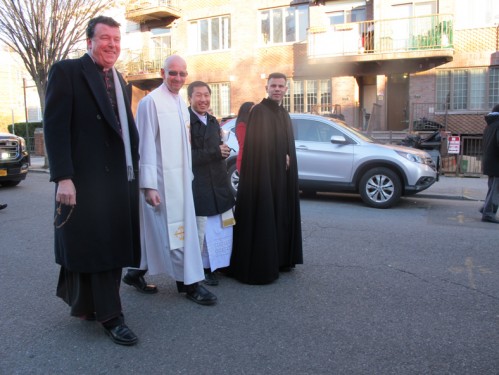 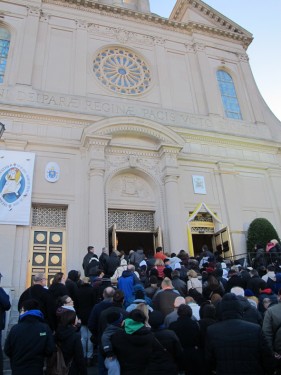 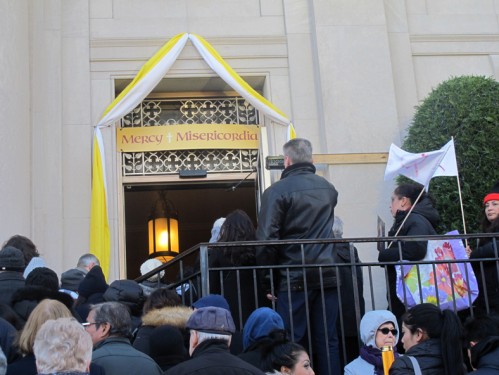 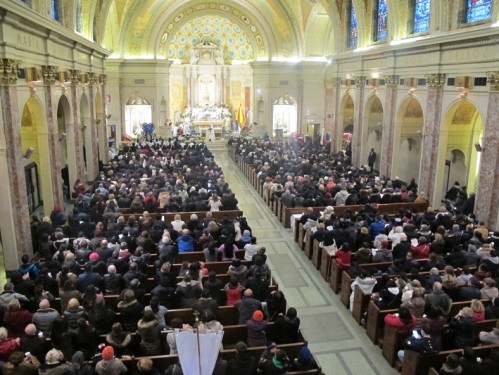 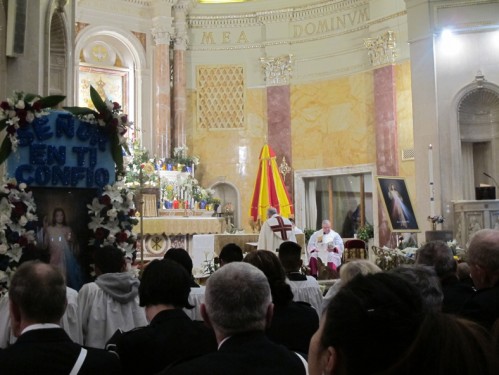 On Divine Mercy Sunday, Catholics around the world brought a miraculous image with great power out for all people to see.

This image of Divine Mercy, with the inscription “Jesus, I trust in you” was ordered directly by Jesus through St. Faustina Kowalska. He told her: “By means of this image, I shall be granting many graces to souls; so let every soul have access to it.”

In Brooklyn, Bishop Nicholas DiMarzio led a procession that brought the image of Divine Mercy out into public view.

“We are celebrating the Mercy that we gained on Good Friday,” Bishop DiMarzio said as he led a five-language rosary in English, Polish, Spanish, Italian and Chinese. “It’s wonderful to see the Pentecost here in Brooklyn.”

The procession officially started in St. Frances de Chantal, Borough Park. The pastor, Canon Andrzej Kurowski, S.A.C., said this was the first time the whole deanery, B8, came together for a procession. He said this collaboration was a wonderful way to help the people approach God’s Mercy and receive a plenary indulgence.

The procession also served as a mini-pilgrimage to the Holy Doors at Regina Pacis Basilica, Bensonhurst.

He said the procession was a way for parishioners to offer an extra sacrifice to bring the message of Mercy out into neighborhoods where Christians are in the minority.

“It’s bringing God’s goodness beyond the threshold of our churches into our communities, into our streets, into our neighborhoods, who still have not acknowledged the Mercy of Jesus,” he said.

When the faithful reached Regina Pacis, the bishop led them in a prayer ceremony that included the Chaplet of Divine Mercy, also in five languages.

During his remarks, Bishop DiMarzio asked the congregation to think about the poor Polish nun who received a message of hope and mercy during the 1930s, a time of great despair in the world, especially in Poland.

“I desire that there be a Feast of Mercy,” St. Faustina quoted the Lord saying in her Divine Mercy in My Soul Diary.

“The soul that will go to Confession and receive Holy Communion shall obtain complete forgiveness of sins and punishment. On that day all the divine floodgates through which graces flow are opened.”

“Souls perish in spite of My bitter Passion. I am giving them the last hope of salvation, that is, recourse to My Mercy. If they will not adore My Mercy, they will perish for all eternity.”

Jesus also showed St. Faustina the image He wished painted with the words “Jesus, I trust in you,” inscribed on the bottom.

“I promise that the soul that will venerate this image will not perish. I also promise victory over [its] enemies already here on Earth, especially at the hour of death. I, Myself, will defend it as My own glory,” Jesus said.

There were many obstacles – failing health, unbelieving peers and the Church’s great scrutiny in determining the validity of her visions – laid before St. Faustina in completing God’s commands. However, through it all God assured her that He will be with her and will guide these works Himself.

In the year 2000, St. John Paul II declared Sister Faustina a saint and in acknowledging Jesus’ command, he established Divine Mercy Sunday a week after Easter, just as the Lord prescribed.

Pope Francis declared Dec. 8, 2015 to Nov. 20, 2016 to be an extraordinary Holy Year of Mercy and explained that he wants to make it evident that the Church’s mission is to be a witness of compassion.

Pope Asks Dioceses to Build ‘Monuments’ to Year of Mercy

VATICAN CITY (CNS) – Pope Francis asked Catholic dioceses around the world to set up a permanent memorial of the Year of Mercy by establishing a hospital, home for the aged or school in an under-served area.

Celebrating Divine Mercy Sunday with an evening prayer vigil April 2 and a morning Mass April 3, the pope said the idea came to him during a meeting with a charitable organization and he decided to mention it at the vigil with participants of the European gathering of the World Apostolic Congress of Mercy and followers of the Divine Mercy devotion.

“As a reminder, a ‘monument’ let’s say, to this Year of Mercy, how beautiful it would be if in every diocese there were a structural work of mercy: a hospital, a home for the aged or abandoned children, a school where there isn’t one, a home for recovering drug addicts – so many things could be done,” the pope said.

“Let’s think about it and speak with the bishops,” the pope told thousands of people gathered in St. Peter’s Square to pray the Divine Mercy chaplet of St. Faustina Kowalska, and also to remember St. John Paul II, who promoted the devotion and died April 2, 2005.