The Armory in Manhattan was the site of the exciting CHSAA Brooklyn/Queens boys’ sectional track and field championships on Jan. 29. In a tight finish, St. Francis Prep, Fresh Meadows, emerged victorious over Archbishop Molloy H.S., Briarwood, 63-62.

The teams traded the lead throughout the meet, with Molloy performing well in the hurdles and throws while St. Francis controlled the jumps. The team title came down to the final event, the 3,200-meter relay. Prep’s Zalen Nelson turned in a winning time of 10:10.78 to seal the victory for the Terriers.

The meet’s running MVP was Oluwatomide Alao of Molloy. He set both a meet record and a school record in the 55-meter high hurdles at 7.43 seconds.

St. Francis’ Harris Hillery was the meet’s field MVP as he won the triple jump with a distance of 12.92 meters.

The girls of the St. Nicholas of Tolentine, Jamaica, CYO volleyball program (below) gathered for Mass following a weekend of games Jan. 28-29. Members of the four teams, ranging from grades three to high school, attended. After the homily, the players and coaches received a special blessing from Father John Gribowich, parochial vicar, who prayed for their safety when they play and practice and also that they live their Catholic faith in the spirit of sportsmanship on the court. After Mass, the girls gathered in the church hall to have a potluck dinner with meals prepared by their families. 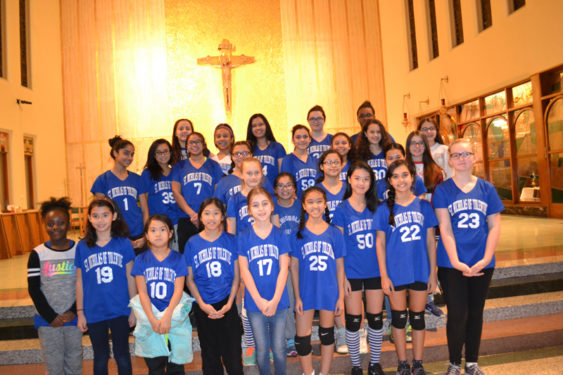