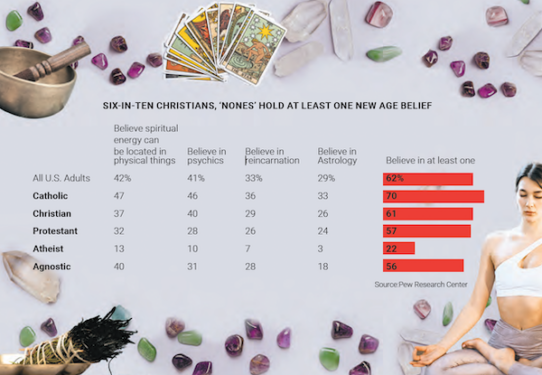 PROSPECT HEIGHTS — Father Joseph Gibino was teaching theology at St. John’s University in the late 1990s when he noticed students shifting their views on spirituality.

The progression played out over two decades, leading to a growing segment of people who follow “no religion in particular” — the so-called “nones.” Father Gibino still tracks their growth. He is the vicar for evangelization and catechesis in the Diocese of Brooklyn.

“We saw a real movement away from self-identifying with any organized religion to ‘I am a very good person,’” he said. “They say, ‘I’m moral; I treat people well.’ But they’re not going to commit to practicing a faith, and certainly not one that makes demands on them.”

However, studies show that while these people aren’t “joiners,” they still seek spirituality — it’s just not the Gospel of Jesus Christ.

The Pew organization reported in 2018 that most “nones” accept one or more New Age beliefs, unlike committed Christians or atheists. Specifically, eight in 10 adult “nones” (about 78%) believe in reincarnation (51%), astrology (47%), or spiritual energy in physical objects like mountains or trees (61%).

Also, a Pew study from April claimed that highly religious Americans — those who pray daily, regularly attend religious services, and value religion in their lives — are far less likely to worry about global warming.

This correlates to the University of Notre Dame research, said Bishop Robert Barron of the Diocese of Winona-Rochester, Minnesota. This data, he said, showed that 59% of young people who stepped away from the Church believe that religion and science conflict.

Why They Don’t Believe

Bishop Barron is also the founder of Word on Fire Catholic Ministries, a multimedia platform on which he has often explored what he has called the “phenomena” of the nones and how to evangelize them.

But Bishop Barron has also said the perceived incompatibility of science and religion is not valid, mainly because the “great founders of science — Kepler, Copernicus, Galileo, Newton, Descartes, etc.— were, without exception,” trained in Church-sponsored schools and universities. He called on modern-day scientists who are faith-committed to join the debate. But science, he added, is not the only issue, or even the biggest.

“The number one reason — reiterated in survey after survey — is that young people are quitting the Church because they don’t believe in the teachings of classical Christianity.”

Other factors, he said, are “general secularism and moral relativism of the culture, the difficulty many young people have with the Church’s sexual teachings, and the supposed correlation between religion and violence” in the post-9/11 world.

Hence, 50% of millennial Catholics now claim no religious identity, and for every one person who joins our Church, six are leaving, Bishop Barron said.

Get the Good News Out

The situation has the attention of Catholics throughout Brooklyn and Queens, Father Gibino said.

“During the Synod, in our diocese, the No. 1 issue, virtually in 100% of the parishes, was concern for youth and young adults,” he said. “So we are also very aware of our outreach to that group. “But we’ve got to get the good news out there to them.”

“We now have parents who don’t know the faith,” he explained, “because they were never taught the faith. If parents are not witnessing the faith to their children, why would we expect children to have faith? So it’s also a matter of going back and capturing the imagination of a generation of adults.”

To that end, Father Gibino said, the diocese is adding onto a “strictly educational classroom model” with a “more evangelization witness model” that teaches people how to live in ways that exemplify the faith.

Father Gibino said with a classroom model, “we send kids to religious education or a Catholic school. And we say, ‘Well, that’s the teacher’s job. That’s the catechist’s job.’ No, it’s your job as a parent. You are the first witness of the faith. It’s right there in the Baptismal Ritual.

“We have to remind parents that we are the responsible role models for our faith. When kids meet adults filled with faith who they admire, they want to be just like them.”

Despite the alarming statistics related to nones, he sees rays of hope shining through the vibrancy of youth who choose to be involved in the Church.

Father Gibino agreed and noted that 350 youth from throughout the diocese will attend World Youth Day, Aug. 1-6, 2023, in Lisbon, Portugal.

Meanwhile, Father Kuroly said the youth ministry’s job is training disciples to be apostles for the Church.

“A disciple is one who learns about the ways of the Lord,” he said. “But an apostle is one who has been sent. They want a place at the table and are a vibrant part of the Church today.”

Bishop Barron urges each parish to become a “missionary society” with a priority for evangelization.

In that pursuit, he added, Catholics must “stop dumbing down the faith” and make intellectual arguments.

For example, science is an outgrowth of God’s creation. Therefore, caring for it is a priority of the Church, as Pope Francis pointed out in his 2015 letter titled “Laudato Si’, On Care for Our Common Creation.”

Also, the faithful should proclaim the beauty of Christianity, evidenced in the creativity of God’s handiwork and saving grace.

Millennials are very concerned about social justice, another mission of the Catholic faith exemplified by its worldwide care of migrants.

All these truths depend on effective messaging via digital technology accessible by smartphones and various styles of computers, Bishop Barron said. These are proven and preferred information portals of millennials.

For example, as of last August, the “The Bible in a Year” podcast of Father Mike Schmitz of Duluth, Minnesota, had 350 million downloads. Last summer, the Diocese of Brooklyn debuted its podcast — “Big City Catholics” with Bishop Robert Brennan and Father Chris Heanue.

Father Kuroly said he believes there is nothing new about the nones phenomena.

“We’ve been dealing with this for generations,” he said. “I look at my class after Confirmation. Maybe a couple of us have lasted in the Church. My best friends, who I grew up with, are not churchgoers; they went to Catholic school. They’re part of the nones.

“The good news is that we’re finally addressing these challenges and these issues.”

Spirituality Is Replacing Religion For Many People in the U.S.