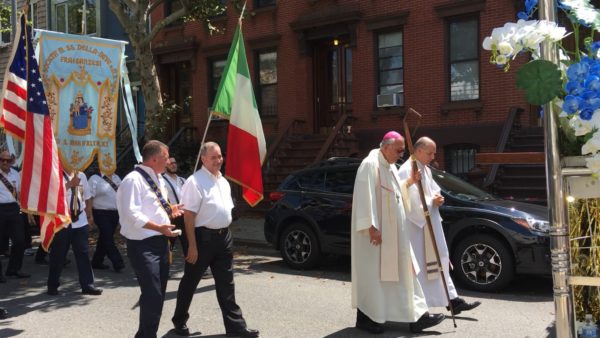 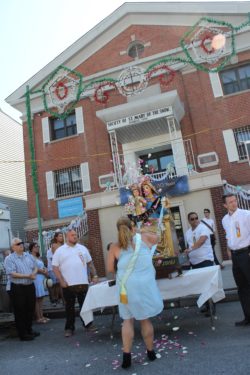 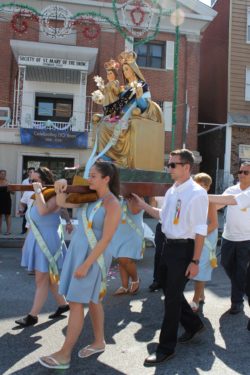 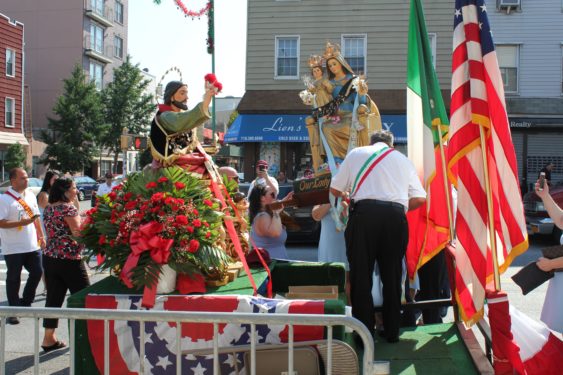 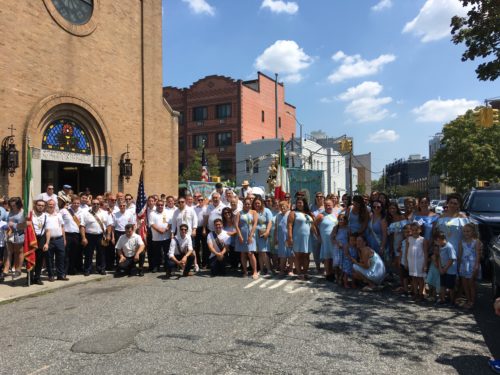 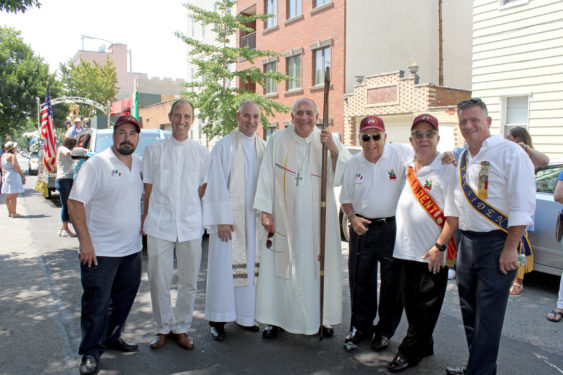 Four generations of Vinny Raymond’s family have been part of the Society of St. Mary of the Snow in Williamsburg, and he’s proud to carry on that legacy.

His grandfather was the first to join in 1941, followed by his great grandmother in 1950 when she helped start the ladies auxiliary. He and his son are both on the roll of members these days.

As society president, he works hard to maintain and promote the traditions, heritage and faith of his forbearers from Sanza, Italy.

Last Sunday was a day of festivity for all members as the society marked its 130th anniversary with its annual celebration in honor of Sanza’s patron saint – Our Lady of the Snow.

“Christmas, New Year’s and Fourth of July all wrapped up into one” – that’s how Raymond described the day as people began gathering at the society’s headquarters at 410 Graham Avenue.

The Society of St. Mary of the Snow was founded in 1888 as a mutual aid society to help Italian immigrant men from Sanza make lives for themselves and their families in northern Brooklyn. The society helped people settle into their new community – find them a job, a place to live, and even provide healthcare. There was a society doctor who would tend to members and their families at no cost.

All that was asked in return for these favors was allegiance to Our Lady and the society, and to help the society grow.

At its height, from about the 1930s to the ’70s, the society had around 550 members, including women who formed an auxiliary group in 1950. Today, there are about 160 in the society and ladies’ auxiliary combined. Four young men joined last year along with a dozen young women.

“I’m the most senior member and the oldest member,” said Joseph A. San Pietro, 97, a past president who joined the junior society 80 years ago in 1938. His father was a founder of the organization.

“My parents believed sincerely in Our Lady of the Snow. She was their patron saint and she’s my patron saint. I adore her,” he said.

More than just keeping San Pietro connected to his faith and heritage, the society was also there for him when he needed them most.

“Nobody knows this because nobody remembers, but two months after I was married – I was married in 1950 – I developed rheumatic fever, and they gave me financial assistance,” he said.

And they kept him on the books, even though he was unable to pay dues. He never forgot what was done for him and his wife at that difficult time, and he has helped with the feast every year since then.

A nine-day novena, starting on July 27, opens the annual observance and men carry the statue of Our Lady on their shoulders through the streets accompanied by the ladies auxiliary.

Prayers and nightly events continue through Our Lady’s feast Aug. 5, when members celebrate with a street procession, Mass at St. Francis of Paola Church and a parade through the neighborhood.

Festivities for the saint also run concurrently in Sanza, and many Brooklynites go there to participate.

“The tradition is very important. I stress that we do things the way our parents and grandparents did,” said Raymond.

As a child and young man, he walked with his grandfather in the parade. When his grandfather passed away, he realized that the whole tradition could pass away if the younger generation did not take action. That prompted him to join the society and his son is a member now as well.

Bishop Nicholas DiMarzio was the main celebrant of the Mass this year, and congratulated the group on its long history in the diocese.

“Today, we celebrate 130 years of this feast being celebrated here in Brooklyn,” he said. “But the truth is … the history of this devotion goes way back.”

Devotion to Mary under the Snows title can be traced to Rome in the year 352. A wealthy couple was praying to the Blessed Mother, asking for a way to honor her. In a dream on Aug. 5, she told them to build a church on Esquiline Hill, where they would find snow as a sign from her.

The next morning, the couple went to the Pope Liberius, who had a similar dream. On that August day, snow was found on Esquiline Hill in the outline of a church that was to be built. Today, it is known as the Basilica of St. Mary Major.

Years later, Our Lady of the Snow was adopted by the people of Sanza when a statue of the Blessed Mother was found inside the wall of a grotto. She became the town’s co-patron with St. Sabino.

A statue of St. Sabino led the procession last Sunday, followed by the San Sabino Society, whose members are also from Sanza and share a bond with their countrymen. Snows men could be seen in crisp white shirts and black trousers, while women wore blue dresses for Our Lady. Families and friends followed behind them.

Bishop DiMarzio also joined them in procession under the blazing sun, as did Father Thomas Vassalotti, pastor of Divine Mercy parish, of which St. Francis of Paola is a worship site.

Though some members have relocated, many return each year from Long Island, New Jersey and even Florida, and they continue to offer spiritual, social and moral support to each other and the wider community.

“We act like a family to each other. If somebody passes away, like a family, we all show up. That’s one of the big things that we do,” Raymond said.

Today, members of the ladies auxiliary also crochet blankets for premature babies, the elderly and hospice patients, said Teresa Curcio, president of the auxiliary. They conduct coat drives, visit the homebound and pray for sick members.

When asked what inspires her to keep going and serving her community in all of these ways, Curcio said, Our Lady of the Snow, of course.

“She means the world to me,” she said.