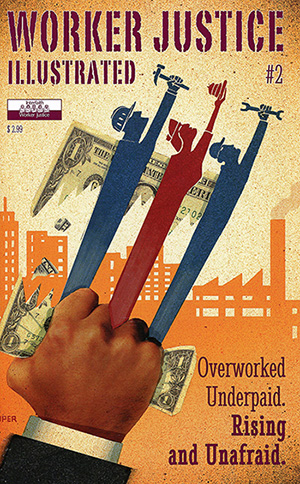 WASHINGTON (CNS) – The old greeting “See you in the funny papers” is taking on a new relevance.

Comic books are now one more tool to tell the stories of workers – sometimes their successes, but more often their struggles.

“What puts pictures and words together? Comic books,” said Jeff Korgen, who works with the Chicago-based Interfaith Worker Justice and serves as a consultant to Catholic social justice organizations.

Korgen wrote some of the stories in the second volume of worker-oriented comic books, called “Worker Justice Illustrated,” which was published last year. Copies were handed out to participants at the Catholic-Labor Network’s annual meeting Feb. 7, held as part of the annual Catholic Social Ministry Gathering in Washington.

The comic book is fully bilingual. Flip it over, and the English turns to Spanish, or vice versa.

Tales of Inequity
“Worker Justice Illustrated” tells several tales, including the college intern in behavioral therapy whose family ran out of money for tuition and so had to work at Starbucks and pizza joints; Target janitorial contract employees who demanded – and got – the Sabbath off, which had been granted to Target contract workers in Bangladeshi clothing factories; “The Debit Card That Ate My Bank Account,” about workers getting paid with debit cards, only to have money deducted even for going online for a balance inquiry; and “The Roots of Solidarity,” which opens and closes with quotations from Pope Francis on Catholic social teaching.

There’s even a parody of the old Charles Atlas comic-book ads in which a bully kicks sand at another beachgoer – but here it shows how to gain strength by organizing to beat a “bully boss.” 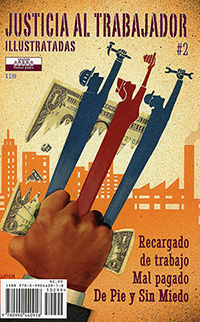 The first edition of the series, “Wage Theft Comics,” was funded by grants from the Catholic Campaign for Human Development, the U.S. bishops’ domestic anti-poverty campaign, and from the Archdiocese of Galveston-Houston. Korgen noted some of the stories told in “Wage Theft Comics” were set in the Houston area.

While the pages of “Wage Theft Comics” were printed on heavy paper with the illustrations in black-and-white, “Worker Justice Illustrated” is printed on glossy paper stock and all illustrations are in color.

The idea for “Wage Theft Comics,” which was published in 2013, came from “Wage Theft in America,” the 2008 book by Kim Bobo, who founded Interfaith Worker Justice and stepped down in 2014 after 18 years as its executive director.

Religious and Youth Education
“The comics are being used in youth groups and religious education classes – just not enough of them,” Korgen said.

Another primary audience is the workers whose lives closely mirror those of the workers depicted in the comic books.

“There is a real tradition in Latin America of using comic books” to tell larger stories, he added.

Mark Pattison is a writer for Catholic News Service.