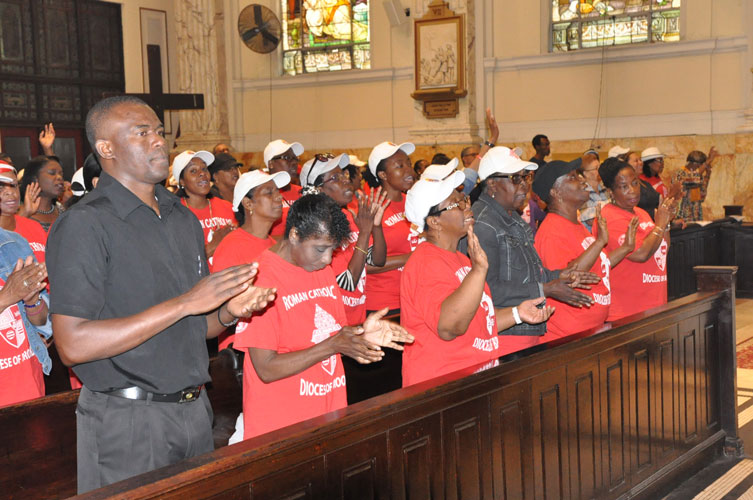 That the West Indian Day Parade actually took place at all was something of a miracle. For days, weather forecasters had predicted dire possibilities from Hurricane Hermine.

The storm took a fortunate turn out to sea and Labor Day turned out to be a beautifully sunny day along Eastern Pkwy. in Crown Heights where the annual festival is held.

About 10 years ago, Bishop Nicholas DiMarzio, who has a special interest in immigrants and migration issues, urged the diocese’s Catholic Migration Office to take an active part in the celebration of West Indian culture.

And so, a tradition was begun and it continued this year. Catholics would begin their celebration with Mass at St. Matthew’s Church, which is on the parade route, pretty close to the starting point. Following Mass, the congregation would join the line of march with their parish banners, a diocesan float and bright red T-shirts that proudly proclaim, “Roman Catholic Diocese of Brooklyn.”

Each year, Bishop DiMarzio and of course, Auxiliary Bishop Guy Sansaricq, who was born in the Caribbean nation of Haiti, are the main concelebrants of the Mass. This year, Bishop DiMarzio introduced newly appointed Auxiliary Bishop Neil Tiedemann, former bishop of Mandeville on the island of Jamaica, West Indies, and the Brooklyn Diocese’s new coordinator of ministry to people from the Caribbean.

More home flavor was added by the homilist, Father Herman Heskieth Sharplis, from the island of Dominica, who reminded everyone that people from the Caribbean nations “know how to celebrate and know how to have a good time.”

He also used the occasion to remind people that the day was the feast of newly canonized St. Teresa of Calcutta, who spent her life doing works of charity with the poorest of people and yet still was criticized by some people.

He tied into the story of the day’s Gospel in which the Pharisees were “spying” on Jesus and trying to trap Him in His own words. 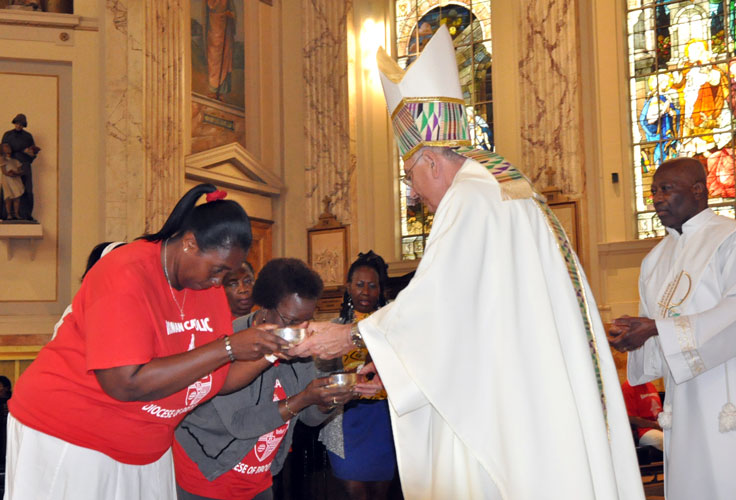 He reminded all in the congregation that sometimes, like the Pharisees, “we like to watch other people, see them make a mistake, and then try to bring them down.”

He urged them to be more like Mother Teresa, to resist the temptation to pull down another person and instead be ready to bend down to help those in need. He particularly recommended the corporal works of mercy in this Year of Mercy.

“There is no neutral ground when it comes to helping people,” said Father Sharplis. “When you see evil and do nothing about it, you are encouraging evil.

“Our presence must be where people are suffering,” he said. “Be people of mercy and compassion and we’ll change the face of the earth.”

The liturgy, which lasted one hour and 25 minutes, was made joyous by the music and the enthusiastic response of the congregation. But they were just warming up. Following Mass, they processed down the center aisle and marched out onto Eastern Pkwy. where they lined up for the parade that stretched more than a mile to Grand Army Plaza.

Off they went, proudly proclaiming their affiliation to Church, passing out medals along the way.

And to think, it almost didn’t happen!