An order of religious sisters called to preach the Gospel through the media is expanding its evangelization efforts in the diocese.

The Preachers of Christ and Mary (P.C.M.) will spread knowledge of Christ by sharing principles and practices of the faith in a series of Spanish-language segments set to air later this fall on NET-TV, the Catholic cable TV network based in Brooklyn and Queens.

Mother Maria Amador, P.C.M., one of the order’s founders and local superior, will host the “Conoce, ama y defiende” TV spots, which will run three to five minutes in between regular programming.

“Madre Maria takes us deep into the history, mystery and doctrine of the Catholic Church,” explains NET-TV producer Eli Soriano, who is filming the pieces at the Co-Cathedral of St. Joseph in Prospect Heights.

The talks will cover over 30 apologetics topics, including religious icons and idolatry, devotion to the Virgin Mary and the papacy. Lessons will aim to deepen viewers’ understanding of the faith so that they may defend it when others ask questions or misunderstand certain beliefs and practices.

“Our faith is a beautiful path to encounter Jesus, so if we know more, we love more,” Mother Maria said. “When we study, we understand more.”

To this effort, she brings previous experience in television and radio evangelization in her home city of Villavicencio, Colombia.

To Know, Love and Serve

Inspiring others to know, love and serve Jesus is the foundation of the Preachers of Christ and Mary, an apostolic order of women religious that took root in Mother Maria’s native Villavicencio in 1995.

Embracing the words of St. John Paul II, the order strives for “an evangelization … new in its ardor… new in its methods (and)… new in its expression.”

Their charism is to preach the Gospel and follow Jesus by means of itinerant preaching, the media, arts, organizing large-scale events and social development, i.e. working with those most in need.

Helping Catholics – and others – to have life-changing encounters with Jesus is the goal for Mother Maria, whose own encounter with Christ came in her mid-20s while studying in Paris, France.

A cradle Catholic who strayed from the church, she was a dentist with plans to get married when she opened her heart to Jesus and put her life in His hands. 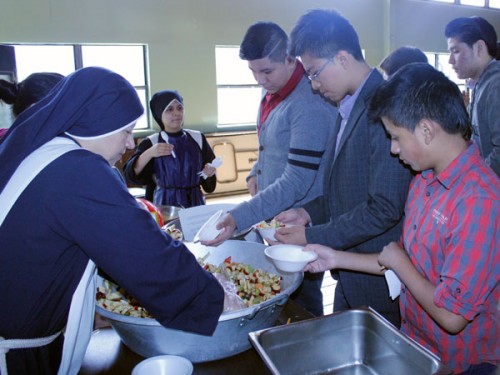 Today, she and members of the order in the U.S. minister in either Louisiana or New York, where they have been engaged in youth ministry and faith formation on the parish level for over a decade.

“Mother Maria and the sisters personify the call of the Holy Father to bring the mercy of God to the peripheries,” said Msgr. Kieran Harrington, diocesan vicar for communications and rector of the co-cathedral. “The sisters create the space for an encounter with Christ, whether someone lives in public housing or in an art colony.

“In a gentle way they have extended a warm welcome to those who for various reasons believe themselves to be far from God’s reach,” he said.

That gentle and joyful way of making God visible in the world today had a profound impact on Colombian-American Sister Tatiana Ramirez, P.C.M.

She first met and was inspired by the sisters at Blessed Sacrament Church while she was in high school. When the sisters arrived at the Jackson Heights parish in 2004, they started a youth ministry and a theater group.

“It brought me into the church,” Sister Tatiana said, “and God used that” to help her discover a deeper relationship with Him. She joined the order in 2009.

For the last year, Sister Tatiana has served as the youth and young adult minister at the co-cathedral, which also houses the main offices of DeSales Media Group, the communications arm of the diocese, and parent company of NET-TV and The Tablet.

Mother Maria and Sister Heidi Delgadillo recently joined the co-cathedral staff and are grateful that Msgr. Harrington is opening doors for them to live their charism in new ways.

“DeSales has everything,” Mother Maria said, referring to the company’s television, print and website offerings in both Spanish and English. “And monsignor is a dreamer, a visionary, so we are working very well together.”

The sisters’ next project in collaboration with DeSales is a Christmas musical at the co-cathedral. Mother Maria hopes this will pave the way for future opportunities to evangelize people from all walks of life.

“The Holy Spirit is in charge but He needs hands, arms and eyes, and so we are here,” she said. “I think a lot of things are coming.”