Nearly 250 miles separate St. Thomas More Cathedral in Arlington, Va., and St. Thomas More Church in Breezy Point, but they’re united by faith.
Parish school children from Virginia personally delivered their prayers, wishes for recovery and a donation to help with that recovery to the children of Breezy Point on Friday, Nov. 30. The two groups met at St. Francis de Sales School, which has temporarily relocated to the former SS. Simon and Jude School, Gravesend.

Numerous children from St. Thomas More attend St. Francis de Sales, and they had the opportunity to meet the Virginia students along with Msgr. Michael Curran, pastor of Blessed Trinity parish, which includes St. Thomas More Church, and Father Sean Suckiel, parochial vicar.
Representing the Virginia school were Tara Quaadman, development director; her fourth-grade daughter, Alex; and the Fuller family: seventh grader Katie, fifth grader Megan and their mom, Cindy.
Media coverage of Hurricane Sandy’s destruction caused the school community to want to help those who had been affected. A dress-down-day fundraiser netted $811, which the school’s parent-teacher organization matched for a total of $1,622.
In choosing where the funds would go, Tara Quaadman discovered that one of the hardest hit areas happens to have a church with the same name as her parish.“This is our sister parish, so we had to do something to help,” she said.
Msgr. Curran gratefully accepted the donation, which he will direct toward the children and young adults of his parish.
“It’s a beautiful sign of the communion of faith, the communion of the church that people over 100 miles away would feel a bond with us,” he said. “But it’s even deeper than that. It’s that sense of union and communion that Catholic schools share.”
Coincidentally, there is another bond between the two parishes —Msgr. Curran attended graduate school with Father Robert J. Rippy, rector of St. Thomas More Cathedral. 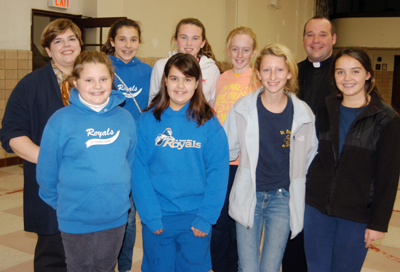 “I feel so sorry for those who lost their homes,” shared Alex Quaadman. But she felt “great” knowing that her dollar donation, added to the donations of classmates, teachers and parents, could make a difference.  Students who couldn’t travel from Virginia sent a piece of themselves in the form of a yellow banner with the words, “STM prays for you,” and their nearly 400 names, which was presented along with the donation.
St. Francis eighth grader Erin Kennedy, whose Breezy Point home was flooded in the super storm, had the chance to meet the Arlington visitors. “I think this shows how much people care and are there for us,” she said.
Tara Quaadman hopes this will be the beginning of a relationship between the two St. Thomas More churches.
“Our faith holds us together,” Msgr. Curran told the children. Addressing the Virginia students, he said, “You are always at home at St. Thomas More in Breezy Point.”