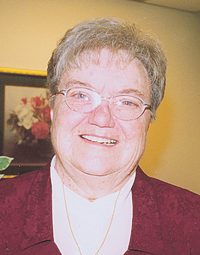 Sister Helen Butler, O.P., a member of the Sisters of St. Dominic of Amityville for 70 years, died at her order’s motherhouse in Amityville on April 28. She was 88.

Sister Helen grew up in Long Island City, where she attended St. Joseph’s parochial school. She attended St. Agnes Academic H.S., College Point, and entered the Dominican Sisters in Amityville, L.I., after graduation. She professed her final vows in 1950.

During her career, Sister Helen worked as an educator and administrator and in information technology in the dioceses of Brooklyn and Rockville Centre. In the Brooklyn Diocese, she taught at All Saints, Jamaica, at the parish’s elementary school and high school, 1952-64. During that time, she earned a bachelor’s of business administration from St. John’s University.

Also in Brooklyn, she worked in IT for the diocese, 1972-80. In 1980, she became a systems analyst at the former St. Anthony’s Hospital in Woodhaven. She served simultaneously as her congregation’s director of finance and treasurer, 1981-89. She helped start Dominican Village, an assisted-living home that opened in 1992, and served as its CEO and executive director, 19920-2007

A Mass of Christian Burial was celebrated May 2 at St. Albert Chapel at Queen of the Rosary Motherhouse in Amityville. Interment in the sisters’ cemetery followed.