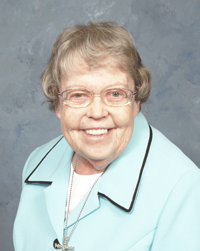 Sister Kathleen Early, G.N.S.H., (formerly Sister Mary Rose), 94, a member of the Grey Nuns of the Sacred Heart for 73 years who taught in the Diocese of Brooklyn, died Oct. 9 at St. Joseph’s Manor in Meadowbrook, Pa.

A native of New York, Sister Kathleen entered the Grey Nuns of the Sacred Heart in 1946, and earned her bachelor’s degree from D’Youville College in Buffalo, N.Y., and a master’s from St. Bonaventure University in Olean, N.Y. Both degrees were in education.

Locally, Sister Kathleen served as principal and superior at Our Lady of Fatima in Jackson Heights from 1953-1957 and 1960-1966 and St. Leo’s in Corona from 1966-67, before she went to Blessed Sacrament in Jackson Heights, where she worked for 10 years. She later taught in Pennsylvania.

Her funeral Mass was scheduled for Oct. 19 in the Redeemer Sisters’ chapel in Huntingdon Valley, Pa. Burial followed in Resurrection Cemetery in Bensalem, Pa.