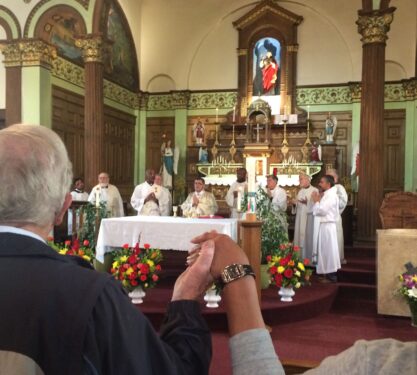 In 2017, the faithful gathered at Sacred Heart Church — where Julia Greeley went to Mass every day while living in Denver — in anticipation of the transfer of Greeley’s remains to the Cathedral of the Immaculate Conception. (Photos: Courtesy of The Julia Greeley Home) 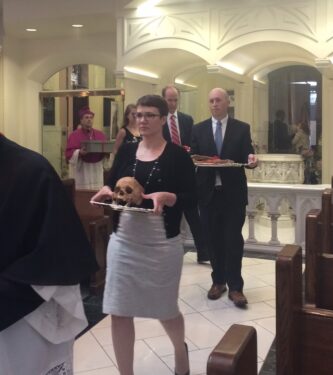 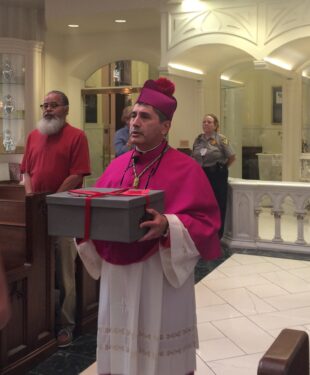 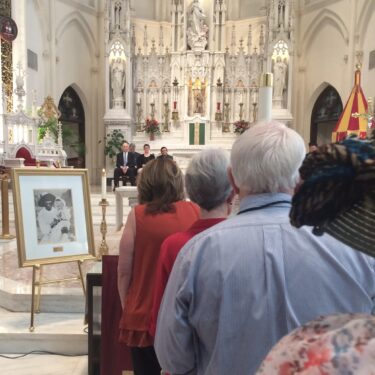 In 2018, the faithful had the opportunity to venerate Greeley’s remains at the Cathedral of the Immaculate Conception. 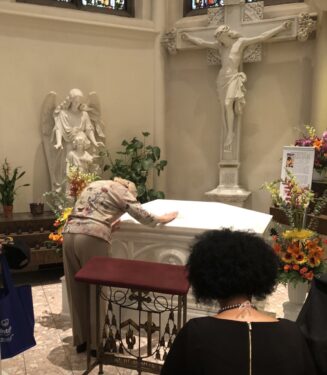 In 2018, a woman prays at Greeley’s marble tomb on the 100th anniversary of Greeley’s death.

WINDSOR TERRACE — She is known as “Denver’s Angel of Charity” and she might just become the first African American saint in the Catholic Church.

Her name is Julia Greeley, and she’s known for her dedication to the poor. Because of that, she has taken her first step toward sainthood by being declared a “servant of God.”

Greeley was born into slavery on a farm in Hannibal, Missouri, sometime between 1833 and 1855, according to the Julia Greeley Guild’s estimations. At the age of five, Greeley’s slave master caught Greeley’s right eye with his whip in the course of beating her mother — leaving her half-blind. She also endured other physical disabilities and arthritis.

Once she was freed from slavery in 1865, Greeley worked as a housekeeper, cook, and nanny for white families in Missouri, Wyoming, and New Mexico. However, she primarily lived and worked in Denver, Colorado, where she was known to help anyone in need as she wore her signature black floppy hat and had her little red wagon in tow.

According to the Guild, whatever she didn’t need for herself, Greeley spent giving to and assisting poor families and children by walking through Denver’s dark alleys at night.

“She had even been seen going through the streets at night with a mattress on her back,” remarked Mary Leisring, president and director of the Julia Greeley Guild, which was formed in 2011. A Sacred Heart priest during Greeley’s time also recalled how he once saw Greeley pushing a baby carriage to a family’s home because they needed one.

In 1880, Greeley was baptized into the Catholic Church at Sacred Heart Parish in Denver, where she was enthusiastically devoted to the Most Sacred Heart of Jesus, the Blessed Sacrament, and the Blessed Virgin Mary.

Every month, she also regularly visited every Denver fire station and delivered prayer cards and pamphlets about the Sacred Heart League to the firemen. Greeley joined the Secular Franciscan Order in 1901 and was an active member until her death on June 7, 1918 — the Feast of the Sacred Heart of Jesus.

Upon her passing, about 1,000 people went to Sacred Heart to pay respects to her body that was laid out in the church. Greeley has the distinction of being the “only simple Catholic layman in the history of Denver whose dead body lay in state in a Catholic church,” according to the Guild. She was laid to rest in Mt. Olivet Cemetery.

Under Review for Sainthood

Dozens from the Denver church had requested that Greeley’s cause be considered for canonization, which was finally granted in 2016.

Denver Archbishop Samuel Aquila hired a Roman postulator and launched formal petitions for the opening of the cause for canonization. Greeley has since been declared a “Servant of God” — the first phase of the four-phase process for canonization.

As part of the cause for canonization, her remains were exhumed, transferred, and placed in Denver’s Cathedral Basilica of the Immaculate Conception in the late spring of 2017.

Greeley’s bones were later placed in a redheart wood funerary chest inside a marble sarcophagus — which was permanently placed in the cathedral’s transept, where the faithful can privately revere her bones and invoke her intercession.

In January 2021, the guild announced that the diocesan inquiry had been officially recognized and accepted by the Congregation for the Causes of Saints.

Leisring said the group also obtained a Decree of Juridical Validity of the Diocesan Inquiry. She added that the next step will be having a position written for Greeley to become venerable.

Since one of the requirements of sainthood is verified evidence of at least two miracles, the guild continues to collect testimonies from those who have prayed to Greeley for her intercession.