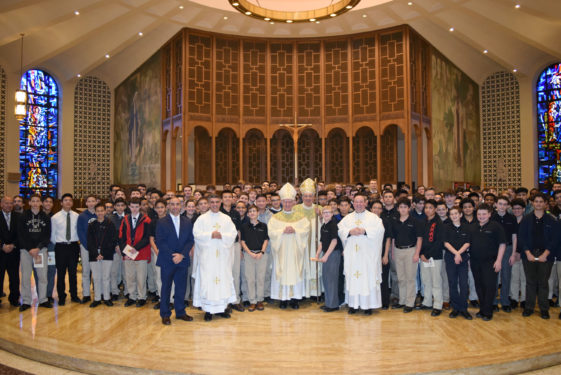 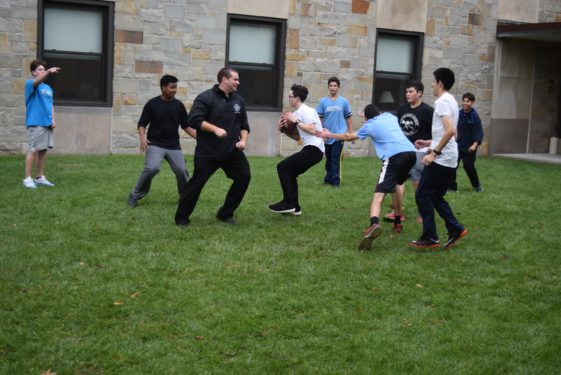 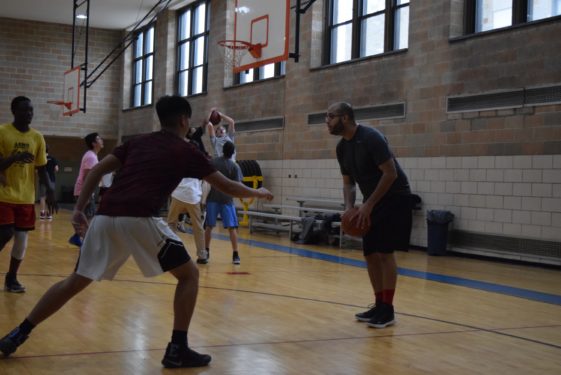 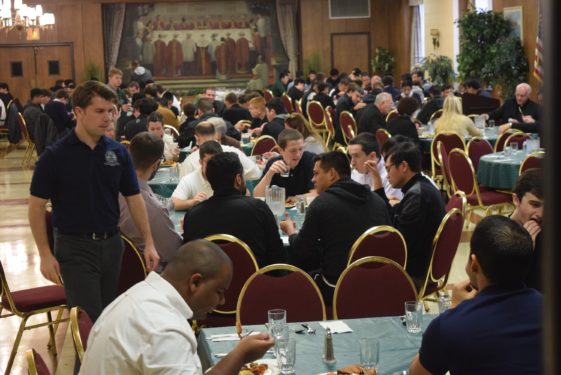 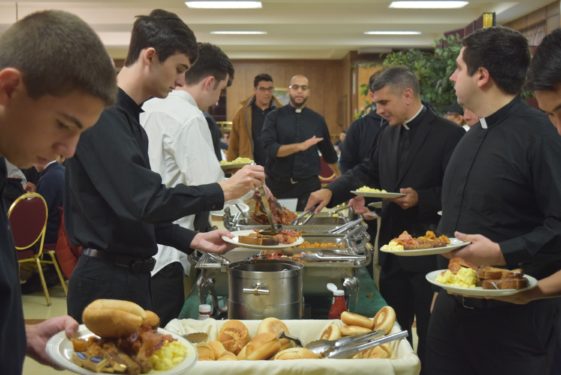 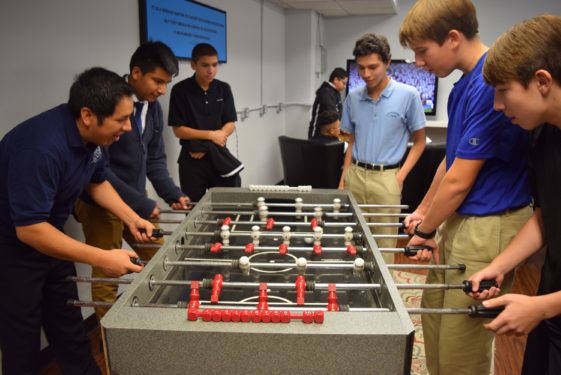 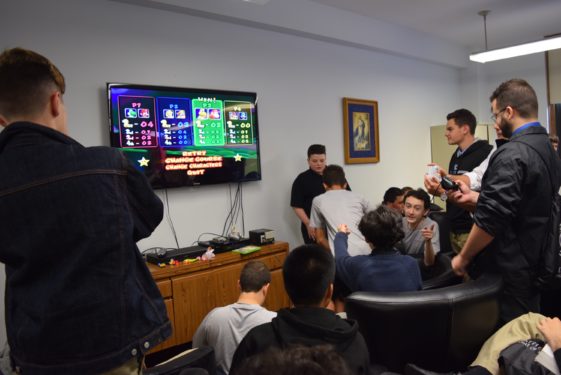 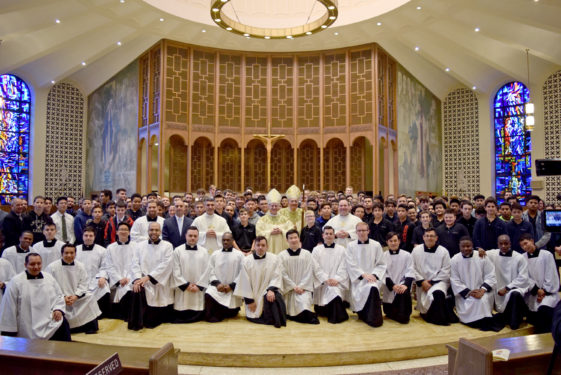 Bishop Nicholas DiMarzio celebrated the Year of Vocations’ first Inter-Seminary Day Nov. 1 with all levels of seminary formation – St. Joseph’s Seminary, Dunwoodie, the Cathedral Seminary House of Formation, Douglaston, and the Cathedral Preparatory School and Seminary, East Elmhurst ­– gathered under one roof at the Immaculate Conception Center in Douglaston, for a day filled with fraternity, fellowship, service and fun.

“The day is about the men at the different levels sharing their stories,” said Msgr. Peter Vaccari, rector at St. Joseph’s Seminary. “The younger men perhaps listening to the older men as they journeyed through and being inspired by them, seeing why they can consider surrendering their lives, devoting their lives to the service of the Church in the Diocese of Brooklyn.

It was a day of double celebrations beginning with a Mass for the Solemnity of All Saints in the main chapel.

“Each one of us is called to this sanctity,” said Bishop DiMarzio during his homily. The bishop reminded the young men that striving for such sanctity will require overcoming the many temptations this world offers. He continued by offering a glimpse of hope when he said, “that’s why we have to strive to be even greater.

“When we do God’s will, we can overcome. Jesus tells us as we hear time and time again, He is always with us. The Gospel reminds us there is no temptation which we cannot be overcome because God does not test us beyond our means. Our salvation comes from the Eucharist – this is where we get the strength and the will and the courage to become saints.”

While those gathered celebrated the communion of saints from the past, it was also an opportunity for the present priest leaders within the diocese to show support for ongoing faith formation.

Bishop DiMarzio, Auxiliary Bishop Raymond Chappetto and priests from the Office of Vocations and around the diocese spent a day interacting and inspiring the men who are not only the path to discerning the priesthood, but also the young men who might not recognize the call just yet.

“God willing that men will respond to the prayers of the people throughout the diocese, the prompting of the Holy Spirit and in a very special way which the diocese has dedicated to the patronage of the Blessed Mother,” added Father Vaccari.

“With that behind the men, and that power of prayer and that listening that goes on in a day like this, there will be real hope in the number of men who will really understand that God is calling them to serve the Church as priests who bear fruit.”

For some students from the Queens high school, it was their first experience at the Douglaston seminary.

“It’s been pretty interesting,” said senior Rasheed Kelly, a parishioner at Sacred Heart in Cambria Heights. “I feel at home, I don’t feel like if I were to come here anything would change between here and Cathedral. But just the presence of older guys, it makes me feel like a brotherhood but more guided.”

Kelly noticed one of the seminarians in attendance was from his Queens parish.

“Normally when you come to a new place, they throw a whole bunch of activities at you, but (the seminarians) made us feel more at home, like we’re not overwhelmed or confused, so that’s great,” Kelly said.

Throughout the Year of Vocations, Bishop DiMarzio has reiterated the diocese’s research about what was lacking when approaching young people about considering a vocation: no one asked. But while the bishop’s homily that day called to mind the topics of sanctity and holiness, it was the event itself that allowed new visitors to the seminary a chance to experience the missing element.

“It’s to sort of introduce us to the seminary lifestyle,” said Cathedral Prep senior Antoine Haran, who attends Our Lady of Hope in Middle Village.

“It’s a big part of what we do at Cathedral, that you sort of are open to the possibility, obviously to living a Christian life even if you aren’t necessarily going to be a seminarian and so to expose us to that.”

After Mass and a group brunch, the young men were also allowed to have free time. For the young men who were ready to take advantage of time not spent thinking about school work, it meant taking a tour of the Douglaston facility, speaking to the seminarians, playing foosball, ping-pong, video games or even football and basketball together with seminarians.

Sitting on a bench after a couple of non-stop games of football in the courtyard was seminarian Joseph Dutan, just days before he was ordained as a transitional deacon.

“Very happy to see all the kids running around, playing different sports, interacting with the guys and sharing with them a little bit of our life here in the seminary and how we’re normal guys,” said Dutan. “We play, we get along, just talking with each other.”

In the building’s Athletic Center were a handful of seniors organizing a small section filled with juice bottles and boxes.

“When they said we could do this, I thought it’s probably the best way I could spend my day,” said Cathedral Prep senior Michael Murphy, a parishioner at Our Lady of Victory, Floral Park. Immediately after lunch, he went straight to the gym to help.

Alongside Murphy was a classmate counting the items in the boxes and labeling them with a marker.

“I just wanted to help out as best as I can,” said Adam Zajkowski. “I know seeing on the news how horrible it is down there.” He explained how the day went for him and his classmates before heading back to school.

“It was a great day to gather together as a community, as a brotherhood, especially during this year that we’re praying for vocations,” Zajkowski said. “I was just happy to come out and have a good time with my brothers and talk to the seminarians and get to see that they’re ordinary people too.”

One thought on “Seminary Students Share A Day of ‘Brotherhood’”