By Gregory A. Shemitz

Connor Whelan was a busy young man during the Scout Sunday Mass Feb. 7 at Immaculate Heart of Mary Church, his parish in Windsor Terrace.

Dressed in his Eagle Scout uniform, the 20-year-old sang with the choir, served as cantor for the responsorial psalm, and played the recessional hymn on the pipe organ.

Before the end of the service, Whelan, who has a mild form of autism known as Asperger’s syndrome, received a rousing ovation from the assembly after Father Ilyas Gill, the pastor, publicly thanked him for his active participation in the liturgy and acknowledged his recent elevation to Eagle Scout, the highest achievement or rank bestowed on a Boy Scout.

More than 50 Boy Scouts and Girl Scouts in uniform, along with their adult leaders, attended the morning family liturgy, which the parish designated as the Scout Sunday Mass. The observance, held annually in early February in many churches across the country, marks the anniversary of the founding of the Boy Scouts of America on Feb. 8, 1910. It also provides an opportunity for faith communities to recognize and honor their local Scout troops.

Whelan is one of many individuals with special needs who have been warmly embraced and affirmed by the Immaculate Heart of Mary Scouting program.

According Chris and Maribeth Dono, two of the parish Scout leaders, more than 30 percent of the boys and girls in the 157-member program have special needs of one type or another, including autism, Asperger’s, Attention Deficit Hyperactivity Disorder (ADHD) and Down syndrome. The youths are integrated into the general membership and work and play side-by-side with their peers.

All three of the Dono’s children participate in the Scouting program. Their oldest, Christopher Jr., a 16-year-old Boy Scout, has Asperger’s and ADHD.

“This parish has become a magnet for children with special needs,” said Chris Dono, a Cubmaster and one of the founding fathers of Boy Scout Troop 187 at Immaculate Heart of Mary. “Everybody is welcome here. Everybody works together,” he said.

The parish’s spirit of inclusion has caught the attention of families in neighboring communities, many of whom have placed their children in the boys’ and girls’ Scouting programs at Immaculate Heart of Mary.

“We’re special-needs friendly, which makes it easier for everyone to fit in,” said Chris Dono, who works full-time as a stagehand at Brooklyn’s Barclays Center. “Our adult leaders are well aware of children with special needs. They know that it may take them a few minutes longer to do some activities.”

Maribeth Dono, a kindergarten teacher, believes encouraging children with and without disabilities to socialize with one another at a young age helps them overlook any perceived differences. “It helps kids respect other kids,” she said.

“They’re just one of the guys,” said Chris.

Whelan is one of Immaculate Heart of Mary’s Scouting success stories. He earned Eagle Scout honors in October after successfully organizing and promoting a benefit concert in April to raise money for the retirement fund for the Sisters of St. Joseph of Brentwood.

Friendly with two of the community’s sisters at his parish, Sister Mary Ann Ambrose, pastoral associate, and Sister Winifred Doyle, a fellow choir member, Whelan wanted to assist the Sisters of St. Joseph after reading about the religious retirement fund in the church bulletin.

“I wanted to do this project to help them,” said Whelan, a music major at Brooklyn College.

A pianist, organist, singer and songwriter, he performed a few of his personal compositions at the concert and played a “Gregorian chant piece” as an organ solo, he told Catholic News Service. The Immaculate Heart of Mary choir and a rock ‘n’ roll band also participated in the event that generated more than $4,000 in goodwill offerings.

“(Scouting) has taught me about service, giving to others, helping others,” Whelan said. “It has also helped me bond with other boys my age and taught me about leadership skills.”

Members of the parish Scouting program also learn to develop relationships with people of other faiths and ethnic backgrounds.

According to Chris Dono, the Scouting roster includes non-Catholic Christians, Jews, Muslims and Hindus drawn from one of most multicultural areas of New York City.

During the Scout Sunday Mass, Father Gill baptized three boys of Latino descent, including two brothers, one of whom was 6-year-old Cub Scout Jacob Rivera. The boy processed with his fellow Scouts into and from the church wearing an orange Scout neckerchief around the collar of his white suit.

“The values (the Scouts) instill are life-changing,” said Jacob’s mother, Jacqueline Rivera, whose other son, 1-year-old Nolan, also was baptized at the Mass.

Rivera and her husband, Frankie, have attended Scout meetings, participated with Jacob in community service projects, and, a few months ago, went as a family on a trip to a Scout camp in the New York borough of Staten Island.

Jacqueline Rivera was thrilled when she learned that her sons’ baptism would take place on Scout Sunday, referring to it as “a beautiful coincidence.”

“(Jacob) loves his fellow Scouts,” Rivera said. “They’re all very supportive of him. It’s like a second family.” 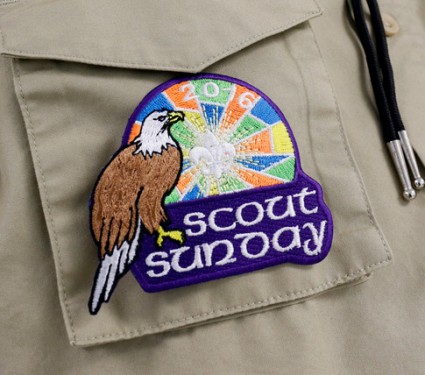 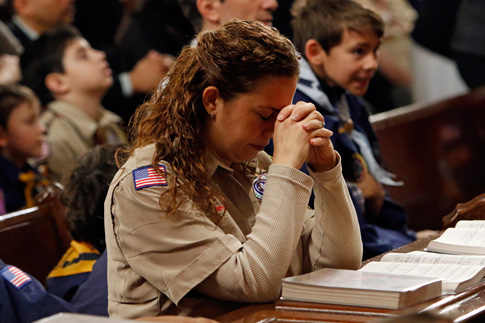 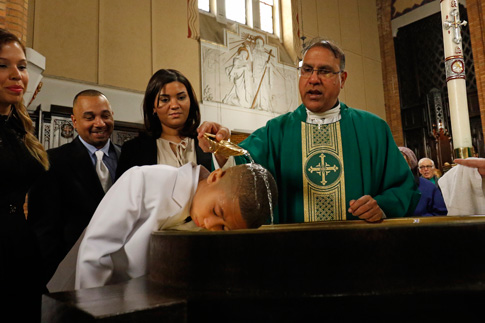 Cub Scout Jacob Rivera, 6, is baptized by Father Ilyas Gill during a Scout Sunday at Immaculate Heart of Mary Church. 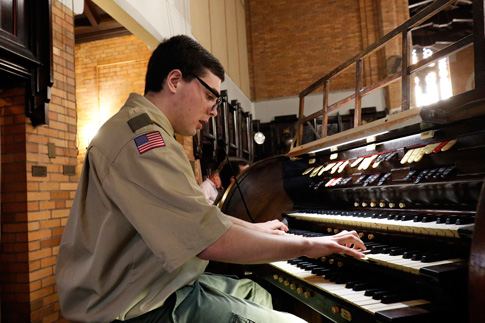 2 thoughts on “Scouting Is Special for Windsor Terrace Parish”