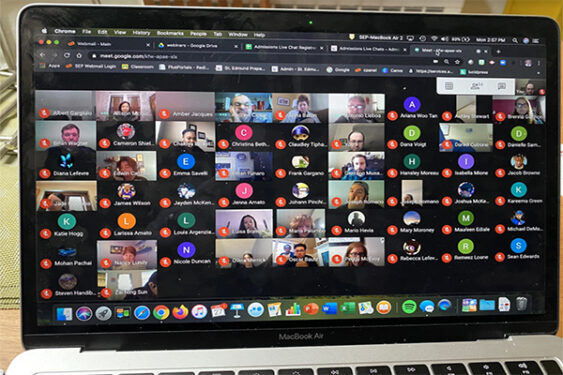 St. Edmund Preparatory High School held regular Zoom meetings with seniors to ensure that the students did not miss out on any new developments. (Photo: Courtesy of St. Edmund Prep) 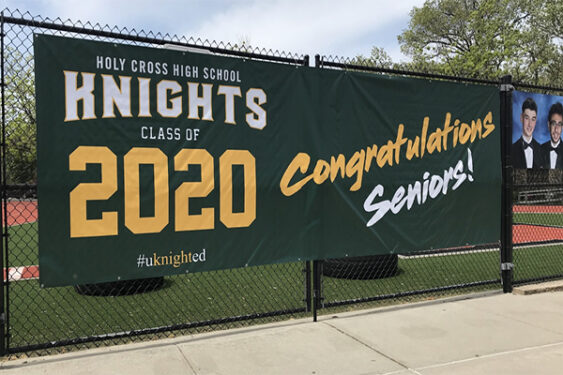 Holy Cross administrators hung a banner on the fence to let everyone who passes by know how proud they are of their graduating seniors. (Photo: Courtesy of Holy Cross) 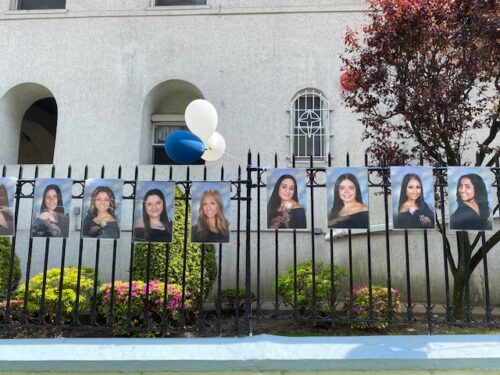 WINDSOR TERRACE — Seniors of the Class of 2020 are saying goodbye to high school in ways unlike any class before them.

Car parades, virtual proms, home visits from principals personally delivering caps and gowns to doorsteps, and drive-by graduation ceremonies are just some of the ways high schools around the Diocese of Brooklyn are making seniors feel special in the middle of the COVID-19 pandemic.

Mary Ann Spicijaric, principal of Fontbonne Hall Academy in Bay Ridge, organized a graduation car caravan to honor her Class of 2020. Seniors drove by the school and were greeted by waving and cheering teachers out front. Spicijaric and the teachers of the all-girls school made sure the surrounding fence was festooned with balloons and large pictures of each senior. The parade took place on May 15, which would have been the last day of classes for the seniors.

“A group of parents came up with the idea during Easter break. I thought it was a great way to at least give the girls something,” Spicijaric said. “Some of the girls said it was one of the best things they’d ever seen. These girls have been through so much. It was wonderful to give them something positive.”

There have been discussions of making the drive-by an annual event, but Spicijaric is leaning against it. “I really want the Class of 2020 to have something that’s just theirs,” Spicijaric said, “a memory just for them. They deserve that.”

A graduation car caravan is also in the works at Cristo Rey Brooklyn High School in East Flatbush, according to Principal Joseph Dugan. On June 13, school leaders will drive, in a caravan, to each senior’s home to present them with their diplomas, Dugan said.

The co-ed high school still plans to hold its annual Senior Retreat and Baccalaureate Mass but will be moving them online.

“It will be a time for the seniors to have time for reflection and prayer, not just on their time at our school, but on what is going on in the world now,” Dugan said.

Carolann Timpone, principal of Saint Saviour High School in Park Slope, had congratulatory lawns signs delivered to each senior. In many cases, she made those deliveries herself, knocking on doors and greeting the surprised girls with a big smile.

“We decided we had to do something for the girls,” Timpone said. “Everybody jumped at the chance.”

It was Timpone’s idea to have lawn signs made and personally delivered to each girl’s home. She made stops in several neighborhoods, including the Rockaways, Marine Park, Gerritsen Beach, and Sheepshead Bay.

Nazareth Regional High School in Flatbush is planning on holding a graduation ceremony, albeit a drive-by one, on June 5, thanks to the vision of Principal Providencia Quiles. “It’s going to be a hybrid celebration. The kids can come into the parking lot to receive their graduation caps,” Quiles said. “As each student comes up, we’re going to flash images of that student, along with the awards they are receiving.”

Teachers will stand outside the co-ed school and wave to students while adhering to social distancing rules. The students will then take part in a car parade near the school.

In May, Nazareth also found a way to celebrate Commitment Day, when seniors reveal which colleges they are going to attend — via Zoom. “We announced every student’s name and asked them to reveal their college choice,” Quiles said.

The Class of 2020 at St. John’s Preparatory School in Astoria will be immortalized through nature. Principal Maria Johnson announced that a tree will be planted on school grounds in honor of this unique class which is graduating at a unique time in U.S. history.

“It’s a historic class. There may never be another like it,” Johnson said. “They deserve to have something that will still be here years from now.” Johnson and St. John’s Prep President Nuala Martinez plan to personally deliver graduation caps and gowns to every senior, even though it’s not yet clear when the ceremony will take place.

The graduation was originally set for June 6, on the campus of St. John’s University, but a poll of the Class of 2020 found that the vast majority still wanted to have a graduation in their school.

Xaverian High School in Bay Ridge is planning a whole host of events to salute the Class of 2020, the first co-ed class in the school’s history.

On June 5, the school will release a video tribute to seniors during the time the annual Baccalaureate Mass would have been scheduled to take place. A special interactive Rosary and Mass in honor of the senior class will be streamed on the school’s social media platforms on June 11.

Members of the administration and faculty will be personally delivering to each of senior a “gift bag” that will include their Xaverian diploma and cap and gown, among other items, on June 13. A picture will be taken of each senior, individually or together with members of their immediate family, which will then be uploaded in a class montage later in the month.

All seniors and their immediate families are invited to stop by and take a picture in the front of the school building any time throughout the month of June. There will be a large banner congratulating the Class of 2020 hanging from the top of the building.