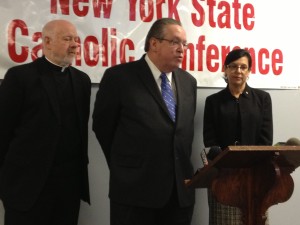 Upstate Catholics and non-Catholics alike came together to support those downstate affected by superstorm Sandy. Through special collections, fundraisers, school events and generous individual contributions, the total amount raised by the Catholic Church and its ministries in the five upstate dioceses was $1,364,822.

A large symbolic check representing that total was presented to Catholic Charities representatives in the three downstate dioceses hardest hit by Sandy. The Archdiocese of New York, the Diocese of Brooklyn and the Diocese of Rockville Centre also collected another $5.5 million to aid the victims of Sandy within their own communities.

The response came 13 months after upstate was severely hit by Hurricane Irene, and downstate dioceses came to their aid.