For the first time, a statue of Our Lady of Velankanni, commemorating apparitions of the Blessed Virgin Mary in southeastern India, is resting next to the altar area of a church in the Diocese of Brooklyn.

The statue of Mary, with the infant Jesus on her left shoulder, sits in Our Lady of Lourdes Church, Queens Village. It was placed there after a procession through local streets on Sept. 11.

An estimated 500 marchers of diverse backgrounds including South Asian, Hispanic, Haitian and European, were led by drummers from the diocesan ministry to people from India. Twenty-four women wore traditional Indian sari dresses and carried plates of rose petals ahead of the statue as a sign of veneration to the Blessed Mother while men from the parish held the statue on their shoulders along the one-mile route.

“This is a miracle,” parish administrator Father Patrick Longalong said at a Mass in the crowded church after the procession.

He was referring not only to the statue’s presence, but also the outpouring of attendance during a nine-day novena in the name of Our Lady of Velankanni that the parish began on Aug. 31 and ended on Sept. 8, the feast of the Nativity of Mary.

Our Lady of Velankanni is also called Our Lady of Good Health and has a major shrine in her honor in the Indian state of Tamil Nadu. The statue is referred to as Our Lady of Lourdes of the East for the healing attributed to it.

But the miracle may also have been how quickly the statue, which stands five feet tall, came to the parish.

Father Longalong and parochial vicar, Father Robert Ambalathingal, who is from the Indian state of Kerala and came to Our Lady of Lourdes just two months ago, both wanted to bring a statue of Our Lady of Velankanni to the parish.

A parishioner connected Father Ambalathingal with a couple in India who had a devotion to Our Lady of Velankanni. The couple, known only as Martin and Helen, donated the statue and paid to ship it to the United States. All they asked in return was the parish’s prayers to help them conceive a child.

The statue, adorned in gold and red for the procession, arrived just two days before the start of the parish’s nine-day novena. 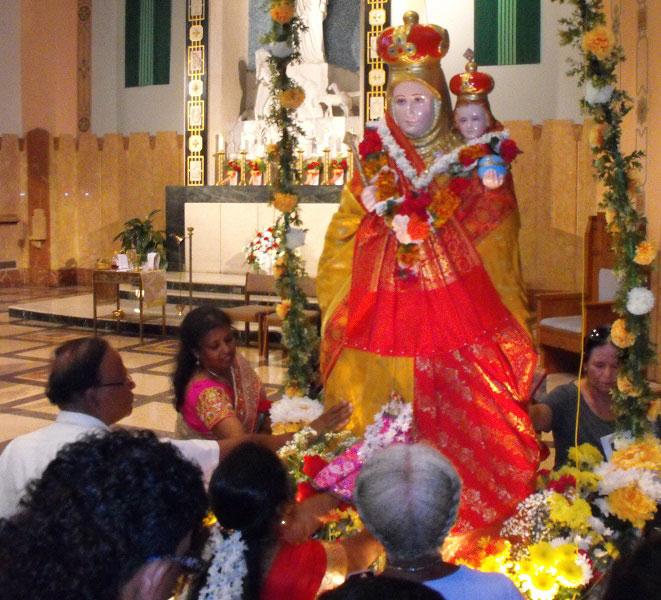 Joy Mohan McIntosh, the daughter of an Indian mother and Hispanic father, is a longtime parish member and on the parish’s Evangelization Committee.

“You can feel the deep faith and unity of people coming together to be respectful,” she said about the parish’s novena and procession. “These events are bringing people together.”

“We have witnessed her intercession,” she said of Our Lady of Velankanni. “Every major part of my life she has interceded and helped me.”

Along the procession route in Queens Village, the marchers sang hymns and prayed the Rosary in English, the Tamil and Malayalam dialects of India, Creole for Haitian parishioners and Tagalog for those from the Philippines.

Nerissa Salvador is on the parish pastoral council and helped organize the novena and procession.
“The Indian community has always been in the background at our parish,” she said. “Now things have changed. This will strengthen the parish and encourage people to participate more.”

Punita Joseph is from the Tamil community at Our Lady of Lourdes. 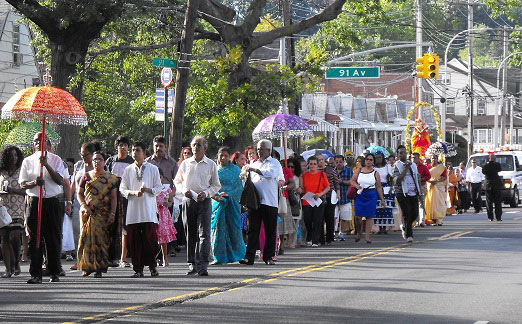 “There are 12 Tamil families in our parish,” she said, “but 80 Tamil families have come from all around the area to participate in the novena and today’s procession. Many Tamil just want to hear the Mass in their own language. But when they heard the different languages pray the rosary at the novena, they embraced it.”

At the Mass after the procession, the prayer of the faithful was read in eight languages representing the diversity of the parish.

“To see people of non-Indian descent participate in this is great,” said Dominque Pastrana, the youth group coordinator for the parish. “Our Lady of Velankanni is also Our Lady of Good Health so she reaches out to all people.”

Lupe Jerez, a parishioner of Hispanic descent, has a new feeling of closeness toward the adoration many Catholics from the sub-continent feel for Our Lady of Velankanni. “I think I have it in my blood now,” she said.