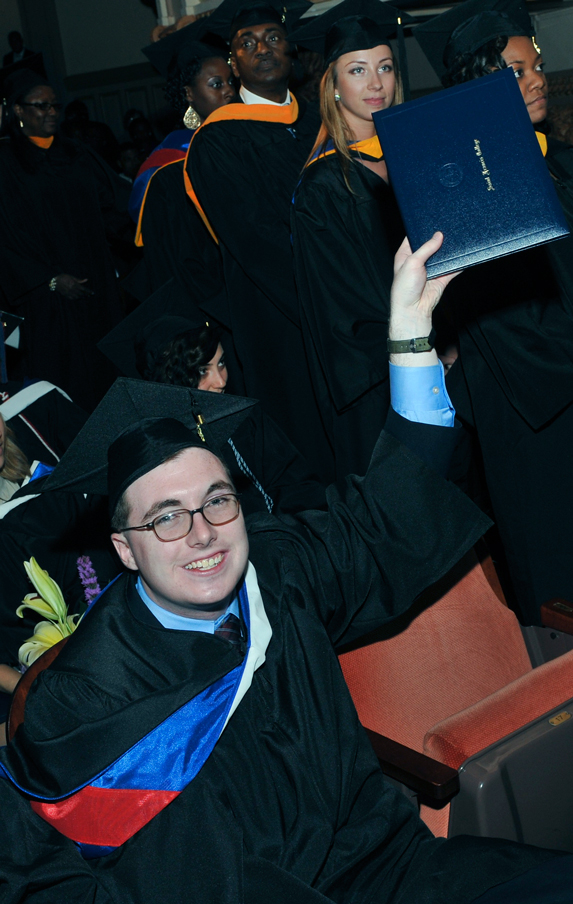 St. Francis College celebrated its largest graduating class ever on May 15 when more than 450 students received diplomas in a ceremony at the Brooklyn Academy of Music.

“Recent years with record incoming classes of freshman combined with our focus on student retention has brought us to a historic point for the College,” said St. Francis President Brendan J. Dugan ‘68. “We would not be here without the dedication of our professors, administrators and staff to the mission of providing a well-rounded, Franciscan education to all who come through our doors.”

The commencement address was delivered by newly appointed Federal Judge Margo K. Brodie ’88, a St. Francis alumna who made history earlier this year when she became the first Afro-Caribbean-born judge to serve in federal court. Judge Brodie’s first experiences in the United States were as a 16 year old student at St. Francis, having just come to the United States from Antigua.

She told the graduates that her life is a story of possibilities, “it is a story of what you can do if you’re determined and if you work hard. Some days I still can’t believe that this dream has come true.”

Judge Brodie said that St. Francis College is a big reason she fulfilled her dream, “know that your degree has prepared you to tackle all the challenges that you will face and to overcome those challenges. Know also that like many who have graduated from St. Francis College and have gone on to do great things with their degree, so can you.”

Valedictorian John Whelan (seen in photo), a Philosophy major with a double minor in Criminal Justice and Political Science will be be taking the next step in his dream to become a lawyer, attending Benjamin Cardozo School of Law. He told his classmates that the strong liberal arts curriculum at the College, particularly philosophy will help everyone in the future no matter what field they choose.

“As helpful as technology may be, our life is not defined by laptops iPhones and Blackberries. Philosophy liberates us from such things.”

Whelan added, “We will have the tools necessary to become ethical accountants, ethical businessmen, ethical doctors, lawyers and teachers.”