By Jorge Dominguez and Tim Harfmann

Bishop Richard Garth Henning, episcopal vicar for the Central Vicariate of the Diocese of Rockville Centre, was ordained an auxiliary bishop of his diocese at St. Agnes Cathedral, July 24.

“It’s been a really emotional whirlwind,” the new bishop said in an interview with The Tablet before the ordination.

“I first heard the call to priesthood at the age of 10 and then had 17 years to get used to the idea before ordination. This time it’s six weeks.”

The new bishop was born in Rockville Centre in 1964 to Richard and Maureen Henning, the oldest of five siblings. He grew up in Valley Stream and received the sacraments of baptism, first Holy Communion and confirmation at Holy Name of Mary parish. As a child, he attended Holy Name of Mary grammar school.

He will join Bishops Robert J. Brennan, Andrzej Zglejszewski and Robert J. Coyle as auxiliary bishops of the diocese. 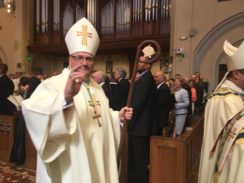 Elaborating on the marine theme of his coat of arms, he said, “I grew up spending summers on the Great South Bay. My family has gone there for about a hundred years now to a small island called Oak Island, and I had been the pastor of a parish in Ocean Beach on Fire Island, so the shell links me to all that and that I love the water and come from an island.”

His friends and colleagues have also heard a story about Bishop Henning driving a boat since age six.

“Well, I don’t want to get my father in trouble,” said the bishop, laughing. “My father was a New York City firefighter and on Oak Island, there is no bridge, so you have to take a boat across so he would have to leave for work very early in the morning.

“My mother grew up in the Bronx and was the most uncomfortable on a boat. I was the oldest, so from a very early age I would take my father across and then come back by myself. It was a tiny boat and went about 3 miles per hour, so there was no danger,” he said.

“It was one of the formative experiences of my life because as a young boy my father trusted me, trained me, taught me and then trusted me to do it.”

Bishop Henning attended Chaminade H.S., Mineola. He received his bachelor’s and master’s degrees in history from St. John’s University, Jamaica, and prepared for the priesthood at the Seminary of the Immaculate Conception in Huntington.  He was ordained in 1992 and his first assignment was as an associate pastor at St. Peter of Alcantara in Port Washington. He is fluent in Spanish and Italian and is able to read French, Greek and Hebrew.

He earned a licentiate in biblical theology at the Catholic University of America, Washington, D.C., and a doctorate in the same field from the University of St. Thomas Aquinas in Rome.

Upon his return, he joined the faculty of the Seminary of the Immaculate Conception in Huntington, where he taught scripture for more than a decade. During this time, he was assisting on the weekends at St. Patrick’s parish in Bay Shore, and later at Our Lady of the Magnificat in Ocean Beach on Fire Island.

In 2012, Bishop Henning was appointed to lead the Seminary of the Immaculate Conception through its transition to the largest retreat house in the northeast. At the request of the ordinaries of Rockville Centre, Brooklyn and New York, he established and still is the director of the Sacred Heart Institute for the ongoing formation of Catholic priests and deacons.

Bishop Henning will continue to serve as the episcopal vicar for the central vicariate of the Diocese of Rockville Centre. Being a fluent Spanish speaker, he will also work with the growing Hispanic community of Long Island.

“I have worked in Spanish basically since the time I was ordained, so 26 years now. I think it is [Bishop Barres’] desire that I continue to do that in an episcopal ministry and be present to the many immigrant Latin American communities that are in the diocese, both in Spanish and bilingually because the young people don’t always know Spanish as well.”

To Serve the Lord

Asked about what it takes to a good auxiliary, Bishop Henning said, “The clue is in the name – you are a helper bishop. The first thing that matters is that I serve Bishop Barres and his vision for the diocese. My role is to receive that vision from him and do everything in my power to make it happen. It is a helping role rather than the primary leadership role. That requires a certain degree of humility.

“Job two is just the essence of priesthood itself,” Bishop Henning said. “To be a bishop is to serve the Lord, the proclamation of the Gospel, and to be there for others and announce the Good News and proclaim that love of the Lord.”