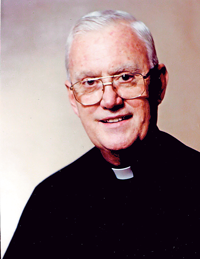 Father John J. Newell died on March 2 at NYU Winthrop Hospital in Mineola, L.I. He was 87.

Born in Brooklyn, he attended St. John’s College in Brooklyn and Our Lady of Angels Seminary, Niagara. He was ordained May 31, 1958, at St. James Cathedral, Downtown Brooklyn, by Bishop Bryan McEntegart. His funeral Mass was held March 8 at Immaculate Conception Center in Douglaston. The homilist was Msgr. John A. McGuirl, pastor of Our Lady of Mercy Church in Forest Hills.

“His real strength was his preaching and his pastoral ministry to our diocese for over 62 years,” Msgr. McGuirl said. “Father Newell spread the Gospel through his music and his life. He was always very happy.”

His burial was at Holy Rood Cemetery in Westbury, L.I.