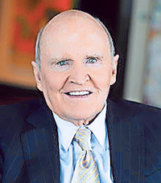 Welch, an Irish-Catholic, was born 1935 in Peabody, Mass. By the age of 45, Welch became chairman and CEO of General Electric. He led the company for two decades. During his leadership tenure, the company’s market value grew from $12 billion to $410 billion.

In 2006, the business school at Sacred Heart University in Fairfield, Conn., was renamed Jack Welch College of Business.

His funeral Mass was held March 5 at St. Patrick’s Cathedral in Manhattan. Cardinal Timothy Dolan, of the Archdiocese of New York, was the celebrant.