WINDSOR TERRACE — Twenty years later, the memories of Sept. 11 are still vivid for people in the Diocese of Brooklyn.

There are reminders everywhere. Over the years, churches and schools erected monuments in tribute to the parishioners and alumni they lost on that tragic day.

The monuments include sculptures shaped like crosses fashioned from steel beams from the World Trade Center, memorial walls listing the names of those killed, trees planted to symbolize survival and renewal, even a statue depicting Jesus Christ lovingly cradling the Twin Towers in his arms.

The Jesus-Twin Towers statue stands in the garden outside St. Ephrem Church, Dyker Heights, and still draws a steady stream of visitors today.

The statue symbolizes “our faith that God was there to meet our loved ones at their most terrible moment in time,” said Mary Jane La Vache, a parishioner whose mother Maria La Vache was killed on 9/11.

The statue was commissioned thanks to La Vache and a group of dedicated parishioners who spearheaded the drive to erect a memorial to the nine church members who died in the Twin Towers.

Click on the image below to see the map in full 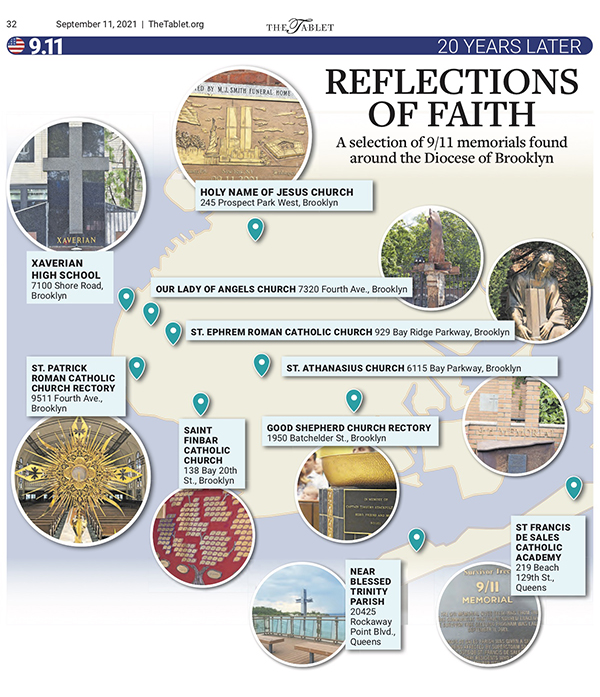 “It was not long after Sept. 11 and we realized that nine of our parishioners, including my family, were directly affected,” La Vache said. “People were just grappling, trying to comfort their fellow parishioners. We wanted to launch a response to the tragedy and the devastation that the whole country experienced.”

With a blessing from then-pastor Msgr. Peter Kain, they formed a committee that included representation from victims’ families.

The committee came to a quick consensus “that we wanted to do something that would be of comfort to the families, but would also be a public demonstration of our shared faith,” La Vache recalled.

La Vache came across a picture of a sculpture depicting the hand of God and the Twin Towers, which she found comforting. She brought it to the committee’s attention and everyone loved it. They reached out to different art studios to exchange creative ideas. “And we came to the final product, which was a life-sized brass statue, and put it in a beautiful garden setting,” she said.

Her mother, a receptionist at Marsh McLennan, worked on the 99th floor of the North Tower. “She loved her job. She was on the floor where the executive offices were and the IT personnel, who were on the young side. They gravitated toward her because of her nurturing, gentle way. I would go up there to visit her for lunch and there would be a crowd of her young colleagues around her desk. I find comfort in the fact that she was doing something she loved,” La Vache said.

Two decades after 9/11, La Vache takes pride in the fact that the statue not only brings comfort to victims’ families but to the public at large. “You’re seeing, young and old, male and female, and they’re just transcended. You have all the busy noises of the city around, but these people aren’t even listening to all that because they’re deep in reflection,” she said.

The statue is eye-catching even to those born long after 9/11. La Vache recently saw a young boy get off his bicycle and kneel by the garden fence to pray. “When I saw that, I said to myself the statue is doing what we were hoping it was going to do,” she said.