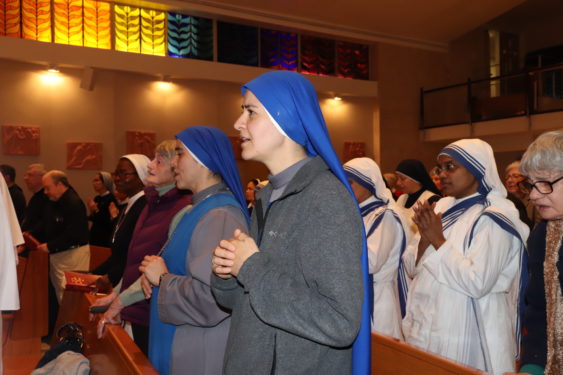 In order to not get lost, one must look at the work of the Church as a multi-millennial venture where each generation plays its own role in salvation history said the bishop to the consecrated congregation.

Bishop Nicholas DiMarzio celebrated a liturgy Feb. 3 at the diocesan Chancery on Prospect Park West, for the brothers, sisters and consecrated lay people of the diocese in honor of the World Day of Consecrated Life.

During his homily, he related how natural religion could never explain the mysteries of existence and so it was up to those in consecrated life to bear witness to Truth.

He also told them that not every person or even every generation can be witness to the tide of salvation history. Therefore men and women must always point humanity to the hope of salvation and the True Love.

The diocese celebrated the day by inviting those in consecrated life to the diocesan headquarters for a mini-retreat. Before Mass, Father Frank DeSiano, C.S.P., offered a reflection on the modern history of American Catholicism.

Ordained in 1972, Father DeSiano served as president and vocation director for the Paulists as well as a consulter to the U.S. Bishops Committee on Evangelization. He is regarded as an expert on evangelization.

He acknowledged what is known as the glory days from the 1920s to the 1960s. During this time, Catholics were accepted into American mainstream and their loyalties no longer questioned.

It was a Catholic generation of builders, Father DeSiano said. Churches were built, monasteries were built and schools were built. Vocations were soaring in numbers and congregations were expanding. There was a sense that the Catholic culture would just grow and grow.

“I could not have ever imagined the diminishment in churches – even

Part of this was the constant flow of immigrants from Catholic countries that needed community in the new land.

However, as Catholics moved into the middle class and out into the suburbs, the entire premise of Catholic growth changed. That was one of the contributors to the decline in the number of active Catholics and vocations, along with a general cultural shift of identity – which is something one can choose, not necessarily something that is handed down from generation to generation.

However, Father DeSiano warned to not mistake nostalgia from tradition. He reminded those present that holiness

during this time was thought to be reserved for the select few who chose a consecrated life and religious services were often simply something to suffer through not to rejoice in.

Catholics lived in fear of Hell, he said, but often lacked a personal connection with God. Things had to change, he added. Vatican II was the result of more than a hundred years of study.

Though the number of active Catholics began to diminish in the 1970s, Father DeSiano said the attitude of believers also began to change.

“Religious life was no longer served in contempt but in service,” he said. It was no longer enough to simply distance oneself from the world, religious men and women began to serve the world in new ways. Discipleship became the new metaphor of Christian life.

The future Catholic lifestyle will be a matter of personal choice not cultural inheritance, Father DeSiano predicted. Evangelization will be the default tool for salvation and lay leaders will take up the reins not just as church volunteers and assistants but as leaders.

With this change, Father DeSiano said, the faithful will rely on those in consecrated life less for organizational support and more as beacons. The religious vows will become a true north for people to challenge their own understanding of self.

Vows of poverty will challenge the notions of wealth. Vows of chastity will show the strength of true commitment. And vows of obedience will question where true power lies.

Giving To The Kingdom

“We will be witness,” Father DeSiano said. “We will model what it means giving to the kingdom.”

This change will require a change in perception, “to see this transition not as collapse, but as transformation.”

The challenge is “seeing time as something that God unfolds, not that which we control,” Father DeSiano said.