“We Remember, We Celebrate, We Believe” was the theme of this year’s diocesan celebration of World Day for Consecrated Life, which drew more than 100 attendees to the Immaculate Conception Center, Douglaston, April 27. 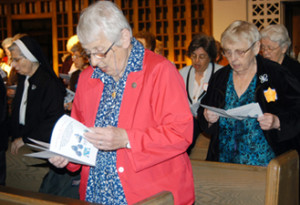 The celebration of World Day for Consecrated Life, instituted by Pope John Paul II in 1997, is an opportunity for the Church to reflect on the role of women and men who choose to serve God by professing vows and dedicating their lives to prayer and service.
Last Saturday’s program was sponsored by the diocesan Council of Religious, and organized by Sister Maryann Seton Lopiccolo, S.C., episcopal delegate for religious.

Sister Mary Hughes, O.P., prioress of the Amityville Dominican Sisters and former president of the Leadership Conference for Women Religious, gave the keynote address. Sister Ave Regina Gould, C.S.J., Father Mike Whelan, C.M., and Brother Greg Cellini, O.S.F., offered personal reflections on the day’s theme.
Religious women and men and laity marked the day with presentations, prayers, a slideshow, discussions and Mass, celebrated by Auxiliary Bishop Raymond Chappetto. This year’s event focused on the gift of those in consecrated life to the diocese, especially during this Year of Faith and the 50 years following the Second Vatican Council.
“Religious women and men have been a gift to the Church, especially to this diocese. Their history is long and deep,” said Sister Maryann Seton.
The Brooklyn Diocese is home to about 100 religious congregations, many of which have left an indelible imprint on the diocesan education, health care and social service systems.
As times changed following Vatican II, she noted, those in consecrated life found new ways to “accompany God’s people and meet their needs,” such as sheltering abused women and children; educating immigrants and college students; combating human trafficking; and serving in faith formation, soup kitchen and prison ministry programs.

Though aging members and fewer vocations are the greatest challenges facing congregations, she said the presence and commitment on the part of religious has not declined.
“We have these areas of need and we are not going to abandon them,” she said. “Today is a day to thank them (those in consecrated life), and to remember and celebrate who we are and who we hope to become.”

Breadth of Consecrated Life
In her keynote talk, Sister Mary Hughes spoke about the breadth of consecrated life in the Church and the diocese, reminding peers that it is “so much larger than any of us.” 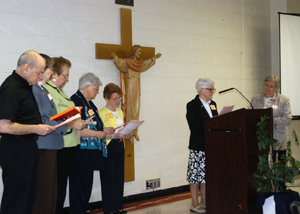 She recalled how the founders of religious congregations came to this country and diocese “with virtually nothing but their passion for the Gospel and their love for God.”
Yet, amid their joys and trials, they started schools, hospitals, health care and social service agencies, and their communities grew.
“We remember the goodness and the holiness and yes, even some of the craziness of ourselves and others … each of us companioned by God on this wonderful and tumultuous journey called consecrated life,” she said. “There is a lot here that cries out for celebration.”

A major cause for celebration, she said, was Vatican II and “the catalyst that it was for the Church in the modern world and religious life,” especially in terms of its directives for consecrated life.
As religious communities responded by better educating members and returning to the basics upon which their congregations were founded, Sister Mary said the result was that religious men and women realized a deeper call to authenticity, became more competent messengers of the Gospel and reconnected with the poor in their midst.
While some left religious life, others remained as each community discerned its path, guided by the Holy Spirit. “Throughout the changes, the mandates, the scrutiny,” Sister Mary said, “we celebrate God’s deep and constant fidelity to us as we engaged in Gospel works.”

Religious men and women have and continue to journey with God’s people, she noted, in various and sometimes unexpected ways, such as marching in the Civil Rights movement, responding to the AIDS crisis, running safe houses for trafficked adults and children, advocating for human rights in government and promoting stewardship of the earth.
“We celebrate that through God’s activity in our lives, we have been able to make a difference in the life of God’s people,” she said.
Looking to the future, Sister Mary remains hopeful. Increases in volunteer and lay associate programs show that people are drawn to the mission and ministry of religious life, even if they are not attracted to the lifestyle.
Despite the consumerism, entitlement and technology that saturate today’s world, she believes there are individuals seeking lives of simplicity, humility and service to God.
“God saw the potential in each of us and laid claim to our hearts,” she said, adding that it is her belief that this “generous God who gave consecrated life as a gift to the Church isn’t going to take it back.”
Dressed in white habits, Ghanaian natives Sister Mary Delphina Tsiwabah, H.D.R., and Sister Irene Nkromah, H.D.R., both from Queen of Peace parish, Flushing, were grateful to participate in the event.

“It was nice meeting other sisters and getting to share some of the experiences we have,” Sister Irene said.
“I thought the day was wonderful,” shared Brother Michel Bettigole, O.S.F., who serves on the diocesan Council for Religious. “What it affirmed for me is that we have a really wonderful way of life, and hopefully that will attract more young people to religious life,” he said.