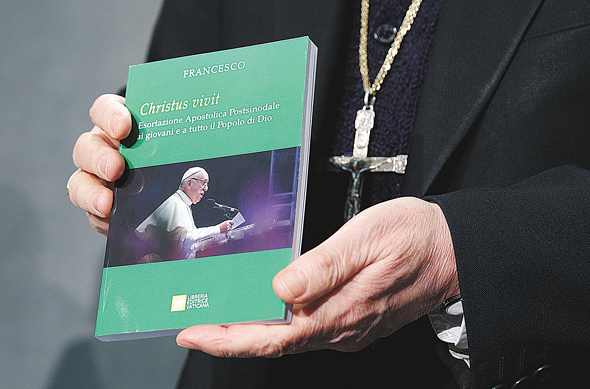 Third in a series

‘For me, reading Pope Francis’ Exhortation “Christ Lives: Addressed to Young People and to the Entire People of God” is like making a day of prayer. Of course, whenever I read anything that any pope has written I pay close attention to it. However, Pope Francis’ writing and speaking touches me on a special  level. This has been true from the start of his pontificate. I continue to hear rumors that some people in the church are trying to force Pope Francis to retire. This is a complete mystery to me. I have found every document that Pope Francis has written inspiring. The following statement from the Exhortation could sum up an entire spirituality, could be a succinct statement about what is happening in our lives because of God’s presence:

“In these three truths — God loves us; Christ is your Savior, – he is alive — we see God the Father and Jesus. Wherever the Father and Son are, there too is the Holy Spirit. He is the one who quietly opens hearts to receive that message. He keeps alive our hope of salvation, and he will help you grow in joy if you are open to his working. The Holy Spirit fills the heart of the risen Christ and then flows over into your lives. When you receive the Spirit, he draws you ever more deeply into the heart of Christ, so that you can grow in his love, his life and his power.” (p.63)

Somehow in my Catholic education, the role of the Holy Spirit in our lives was not emphasized. Probably it is good to remind ourselves that Jesus’ presence in the church does not change but many other dimensions and practices in the church can change. When we study the history of the church we discover that there were periods in history in which the church seemed to live up to its mission better than in other periods. For example, there were periods when theology and philosophy were much weaker than during other periods. The same can be said about scripture studies and devotions and spiritual books and just about everything in the church that involved human beings.

I believe that Pope Francis has been called by God to renew the church on several levels. Whenever I read some document that he has written, I am both inspired and challenged. I will offer one example of how a statement by Pope Francis has profoundly influenced me as a Catholic priest. A few years ago Pope Francis said, “I am certain that God is part of everyone’s life.” I now believe that deeply, but there was a time in my life that I did not believe it. Even as I write this, I am amazed that I once thought that when a person committed a serious sin, God stopped loving that person. Realizing that God is part of everyone’s life should help all of us to realize deeply that though it is important that we be evangelizers, we do not save or redeem people. The Son of God has done that. If God is part of everyone’s life then discouragement is not an option.

Father Lauder is a philosophy professor at St. John’s University, Jamaica. He presents two 15-minute talks from his lecture series on the Catholic Novel, every Tuesday at 9 p.m. on NET-TV.