Though thousands of miles away from Mexico City, Latin American faithful in Queens were able to follow the papal Mass live from the Basilica of Our Lady of Guadalupe Feb. 13.

Braving freezing cold temperatures, about 350 parishioners gathered at Presentation of the Blessed Virgin Mary parish, Jamaica, to watch the Mass broadcast through NET-TV, the Catholic cable TV network based in Brooklyn and Queens.

“Even though we could not go to Mexico, we were there spiritually,” said Olvin Juarez, a young adult at the parish.

On a big screen, parishioners watched Pope Francis at the basilica built near Tepeyac hill, where Mary appeared to St. Juan Diego in 1531.

Calling the Basilica of Our Lady of Guadalupe “the heart of the Catholic spirituality in the Americas,” Father Manuel de Jesus Rodriguez, pastor, said his parishioners came to “witness this live broadcast with their hearts full of prayers” to Our Lady.

Maria Granda, an Ecuadorean-American parishioner, came to thank God because she said that through the Virgin’s intercession, one of her nieces was cured from an aneurysm.

The Mass at the Basilica of Guadalupe was part of the pope’s six-day apostolic visit to Mexico. Father Rodriguez said the stops in this visit – which included the country’s poorest and most-violent areas – were extremely important for his Latin American parishioners, particularly those from Mexico.

“They are tremendously grateful to the pope,” he said. “The pope is making this trip, first of all, thinking of the poor of the world; making sure that the voice of the Church speaks on their behalf.”

Mexican parishioner Teofila Flores, who was there with her husband and one of her daughters, was happy to see the pope in her homeland.

“We did not care about the cold because I think there should be no barriers when it comes to God,” she said. “This is a great blessing. Only knowing that the pope is in our country fills my heart with joy.”

During his homily, Pope Francis reminded people that they are never alone because the Blessed Mother is always protecting them.

The pope added that when the Virgin of Guadalupe appeared to St. Juan Diego, “God roused the hope of the little ones, of the suffering, of those displaced or rejected, of all who feel they have no worthy place in these lands.”

Humble Juan Diego was chosen to be the Blessed Mother’s ambassador who would oversee the building of this shrine, said the pope.

“We are all necessary, especially those who normally do not count because they are not ‘up to the task’ or ‘they do not have the necessary funds’ to build all these things,” Pope Francis said.

“God’s Shrine is the life of his children, of everyone in whatever condition, especially of young people without a future who are exposed to endless painful and risky situations, and the elderly who are unacknowledged, forgotten and out of sight. The Shrine of God is our families in need only of the essentials to develop and progress. The Shrine of God is the faces of the many people we encounter each day.”

The parish broadcasted the Mass live on a 6’ x 10’ screen provided by DeSales Media Group, parent company of The Tablet and NET-TV.

After watching the Mass, the faithful in Queens participated in a communion service.

Rosa Cepeda and Australia Diaz, who had witnessed a papal Mass in Madison Square Garden in September, said they were overcome by emotion to see the pope in Mexico.

“I felt like I was with them (in Mexico) celebrating the Mass, united as a community,” said Cepeda, who is from the Dominican Republic.

“This is beautiful because from a distance we are celebrating here in Jamaica, New York,” said Mexican parishioner Olegario Garcia.

A member of the Guadalupe committee at the parish, Garcia was sharing typical Mexican pastries with his parish community after the service.

Nine-year-old Shaden de Leon Cruz, who was helping the Guadalupe Committee, said that her family members in Puebla were excited for the pope’s visit.

Vivian Aguirre, 13, was happy that the pope was visiting the land of her parents.

Father Rodriguez thought the pope’s message was a powerful way to invite the people of Mexico to renew their faith, following Mary as an example and being committed to Jesus Christ – even during difficult times.

The pope’s other stops during his apostolic visit include a prison and the Mexico-U.S. border, recognizing people’s dignity as human beings, he added.

Odilon Romero said he was touched that the pope was visiting places like Chiapas, where “people live in extreme poverty and the indigenous community is often forgotten.”

He said the Mass at the basilica was special for him because he hopes that one day peace would return to Mexico through the intercession of Our Lady of Guadalupe.

“We know the pope’s visit won’t solve the problems,” Romero said, “but we think that his presence will touch people’s hearts and give them the hope to keep going.” 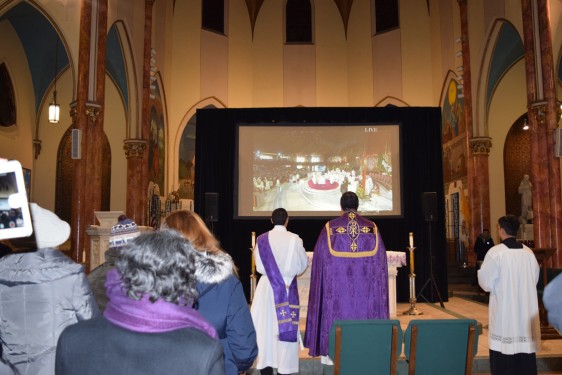 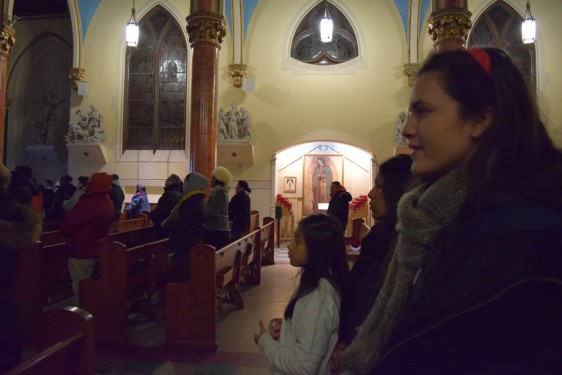 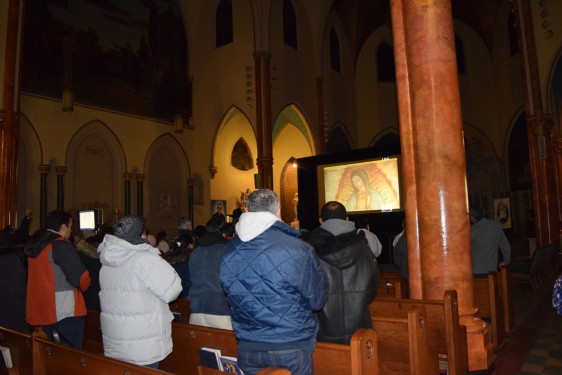 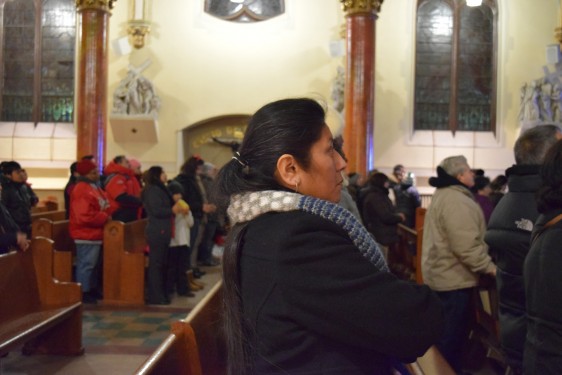 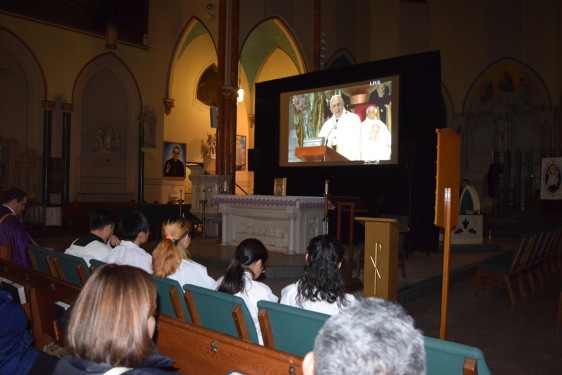 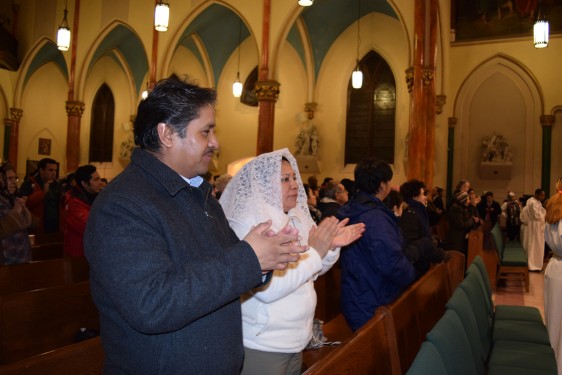 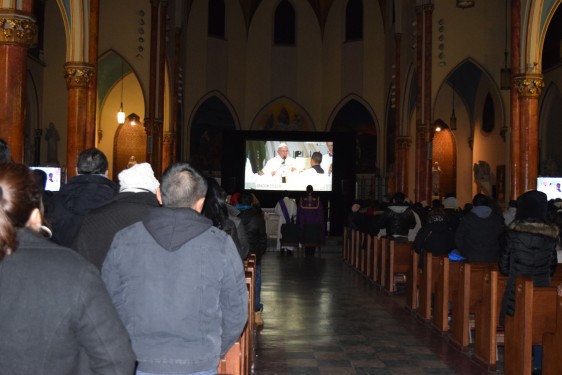 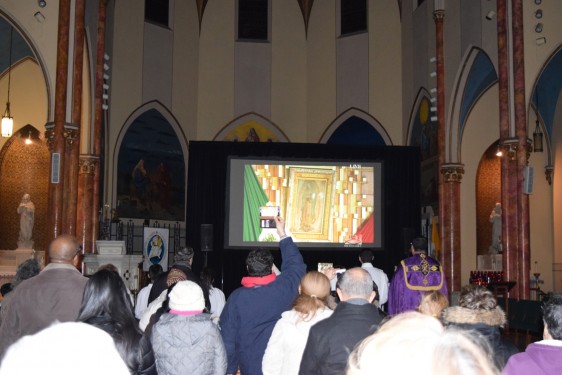 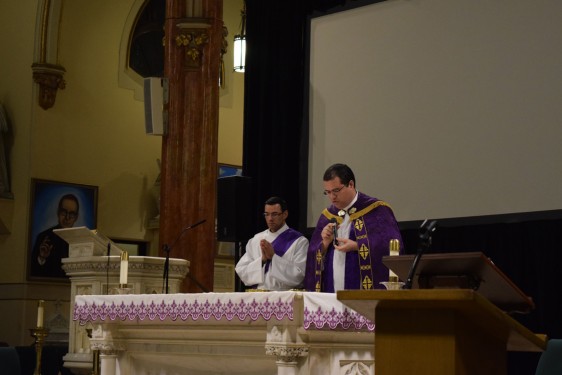 After watching the Mass, the faithful in Queens participated in a communion service. 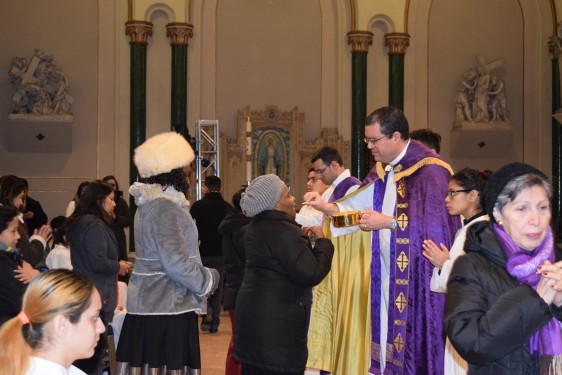 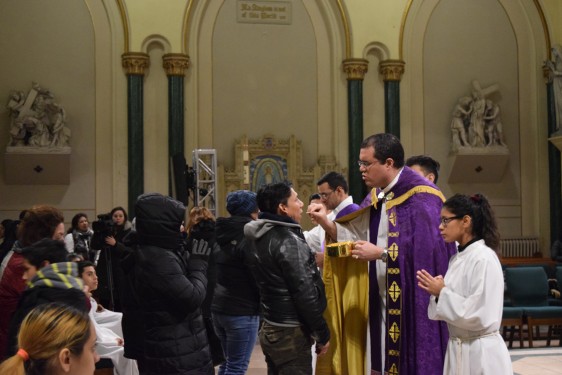 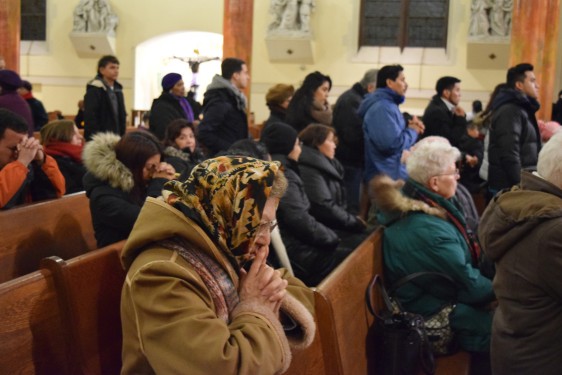 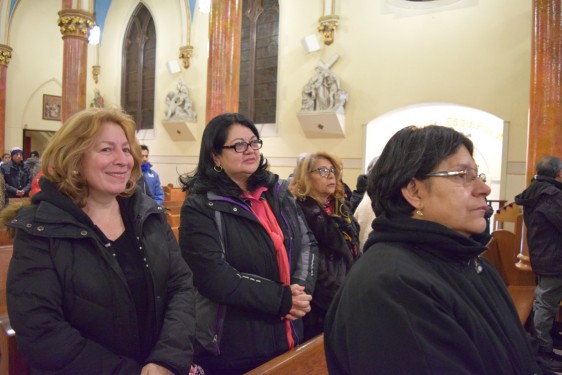 Pope Makes Long-Awaited Visit to Our Lady of Guadalupe

One thought on “Queens Parish Hosts Telecast of Papal Mass”