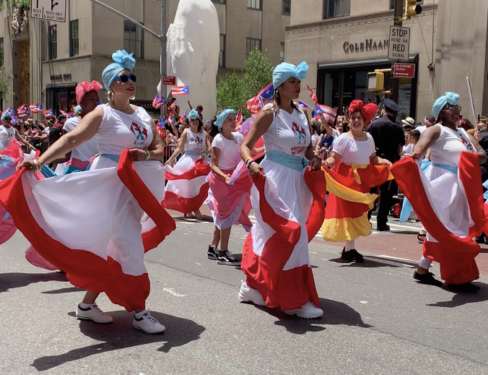 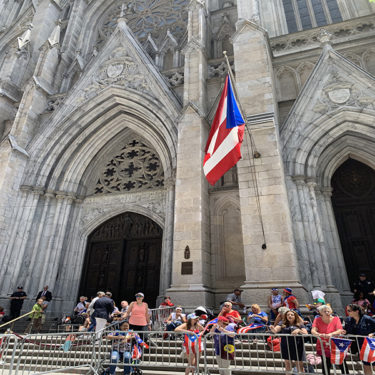 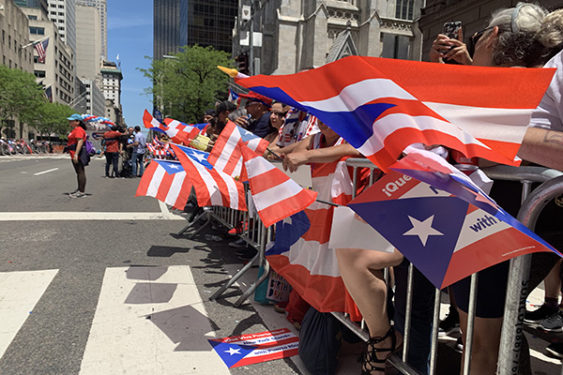 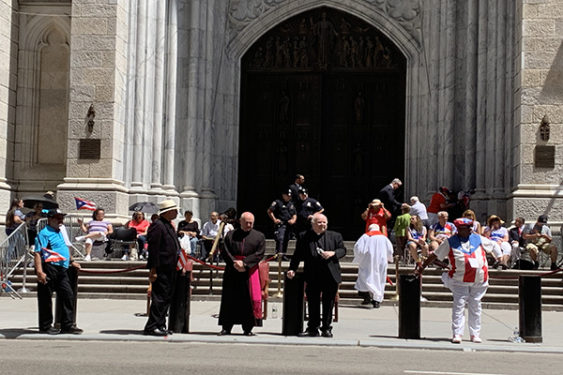 Confetti, singing and signs of the cross were abundant at the 62nd annual National Puerto Rican Day Parade, held in New York City on Sunday, June 9.

While the clave of Salsa music pulsed through the air and down the the Fifth Avenue parade route, for a brief moment floats and marchers went silent as they passed St. Patrick’s Cathedral.

Puerto Ricans lined the church stairs not just for one of the best parade viewing spots in Manhattan, but in remembrance of a Catholic faith that has seen them through political tension, social strife and even natural disasters.

Moments of reflection amidst celebration are not outside the norm for Puerto Ricans. According to the CIA’s World Fact Book, 85 percent of people on the island of Puerto Rico are Catholic. For over 100 years, mainland-born Puerto Ricans have been embracing the Catholic tradition as they celebrate their culture.

Parishioners from the Brooklyn Diocese braved the heat and the traffic, making their way to St. Patrick’s with faith fresh on their minds, just as their parents and grandparents once did in El Barrio over 60 years ago.

Among the parade viewers at St. Patrick’s was Puerto Rican priest Father Eric Cruz, a Regional Director of Catholic Charities, which has continued to send relief groups from New York City to Puerto Rico since Hurricane Maria caused devastation in 2017.

Standing at St. Partick’s entrance, flag in hand, he and other clergy members from the Archdiocese of New York waved and took photos with parade marchers.

Father Cruz knows the parade’s faith history well. From its origins in Spanish Harlem, the Catholic Church has never been a caveat of the parade, but rather a constant focal point of Puerto Rican pride.

“The National Puerto Rican Day Parade has always begun with a Mass to consecrate, to bless the whole week in memory of those who have come in the past. Those bridge builders between New York and the island, including many of our great-grandparents and parents and grandparents.”

Named the Misa Jibara in Spanish, the liturgy on June 2 at St. Patrick’s Cathedral harkened back to the historical roots of the parade.

“It begins with the cultural and religious expression of Catholicism, Christianity in God, the entire week and culminating with this parade,” Father Cruz said.

“That goes back to its very beginnings in the 50s in El Barrio. And even then, it began with the Mass from the local parish, and it just continued to grow.”

He also said that as the island of Puerto Rico continues to heal after Hurricane Maria, Catholic Charities in the city of New York has continued its role in the rebuilding efforts.

“There have been joint missions to the island, joint planning with university officials from both Brooklyn, Queens in New York, CUNY, SUNY, you name it,” Father Cruz said. “There was a massive collaboration here looking towards the resurrection of the island.”

For Nerida Rodriguez, a parishioner at St. Fortunata Church in East New York, the celebration starts with her Catholic beliefs.

For Father Cruz, prayers for the future are centered on preserving the culture that makes the annual event what it is.

“The challenge is, when does it stop being significant to the history of Puerto Rico?” he said. “Especially as generations grow older and have no direct experience with Puerto Rico,” he said, one concern is that “it’s just a party for party’s sake.”

“If it ever reaches that point, end it,” he said, “because that’s not what we’re about. This is about keeping alive who we are, our identity as Latino, Puerto Ricans, our histories and our faith traditions.”

For Rodriguez, preserving the culture can ultimately go beyond Puerto Ricans, as people of all backgrounds have contributed to rebuilding efforts post-Maria.

“It doesn’t matter what parish you’re from, what religion, what creed, nothing,” she said. “You just get together and do justly for the people that are suffering, to build them up again.”