For Mother’s Day, three moms reflected on raising boys who are now priests in the Diocese of Brooklyn.

That’s because, as a child, her son Michael was curious about things happening at the family’s parish, St. Pancras, in Glendale, Queens.

“He started to ‘play church,’ when we had goldfish. When they would die, we would have a funeral service for them.”

Maryann explained that Michael would be the priest, and as such, he organized the funeral services. Little brother Matthew was the altar server, while mom Maryann was assigned responsibility for the loved one’s “remains.”

“I guess I was the pallbearer!” she said with a chuckle. “I had a net with, unfortunately, the dead fish because I had to scoop it out.”

Maryann said as he grew up, Michael’s playtime evolved into making churches with Legos.

“It was just amazing the things he would build,” she said. “He would have a tabernacle, an altar table, and he would have some of the little Lego men sitting in chairs. He would be so happy to show me.

“It was beautiful, very intricate, and detailed. And it was because he had been watching everything that was going on in church,” she recalled.

“It just flew into him. He got a calling. And he probably got it very young.” 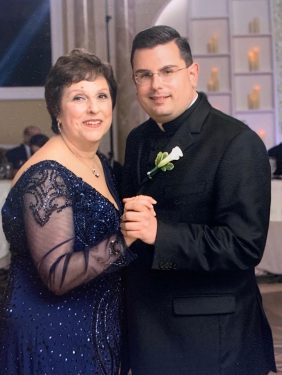 Father Michael Falce said his mother was a loving facilitator of his childhood fascination with the things of God. Today, he is the parochial vicar at St. Patrick’s Parish in Bay Ridge.

“I remember going through a phase with wanting to pray a lot more,” he said. “I had a little altar set up on my dresser, and she would come to pray with me at night. It was just a wonderful kind of thing that we got to bond together and have that time with each other to pray.”

Father Falce said his dad, Joseph, and his mother were high school sweethearts.

After settling down in Glendale, they became very active in laity service at St. Pancras. There, the future priest was also an altar server.

The parents were not surprised to learn of their son’s desire to explore the priesthood. But Maryann said the family never put expectations on either son’s choices.

“I didn’t raise a priest because I wanted one for a son,” she said. “I raised a normal baby boy who grew up wanting to become a priest.

“And I always said to him, ‘We are behind you 100 percent. And, if you say, midway through, this is not for me, OK, that’s fine. We will back you back in whatever you want. We want your happiness.’ ”

A milestone in Father Dwayne Davis’ journey of faith happened at age 10 in Jamaica, West Indies when his mother sent him to get milk.

“A lady engaged me in conversation,” he recalled. “She invited me to church. I went the following weekend, and I never left.”

It was a Catholic church. His mother, Donna Myrie, was, and still is, a devout protestant.

Still, Father Davis said she was the earliest influence on his journey to the priesthood and now to the position of pastor at St. Thomas Aquinas Church in Flatlands, Brooklyn.

He said her most enduring lessons were to know the love of Jesus.

“My mother was a woman of very strong faith,” Father Davis said. “She prayed often and read scripture often. Oftentimes she would fast, and we knew when she was fasting, she’d close the door and spend the day in prayer.

“I think she got that from grandmother, who was really a prayer warrior too.”

Donna said her son enjoyed playing “church” as a little boy. Father Davis said he wasn’t trying to mimic a Catholic priest but rather the oratory of lively Jamaican preachers.

“It was very interesting,” Donna said. “It helped him to see the faith and the influence of his family’s teachings.”

He recalled how the pastor, Father Louis Grenier, preached on Matthew 25:31-46, The Last Judgment.

In this passage, the Lord gathers the faithful, like sheep, as a heavenly reward because “whatever you did for one of these least brothers of mine, you did for me (verse 40).”

“My vocation story goes back to him,” Father Davis said of the priest. “I wanted to help more people become like the sheep, rather than goats, to reach the heavenly kingdom.”

He subsequently converted and was baptized a Catholic. Donna said she accepted her son’s spiritual choices.

“I thought, ‘If that is what he wants, I know the Lord guided him in the right way,’” she said.

Father Davis was still a boy when the family moved from Jamaica, West Indies, to Jamaica, Queens. His home parish became St. Joseph Church. His desire to be a priest emerged and grew. While Donna was at peace about her son’s conversion, she was less enthused about him joining the priesthood.

“I tried to talk him out of it,” she recalled, “but when I saw what he really wanted, I thought, ‘If it’s the will of God, then there is nothing I can do about it.’

“Then I was happy because the Lord chooses. And in every way, we have to answer the Lord’s calling and follow in his footsteps.”

“I tried to keep him from getting into trouble, how to do the right thing, and to avoid the things, not of God,” she said. “To see him ministering makes me very proud.

“I would do anything for him.”

Margarita Torres, who has three boys, knows well the sacrifice a mother willingly endures for a child.

She donated a kidney to her second son, Henry, who today is parochial vicar at St. Sebastian Parish, Woodside, Queens. But he was just a boy when a kidney failed.

Margarita said she was shocked.

“His kidney condition is said to be hereditary,” she said in Spanish, with Father Torres translating. “And no one in our family has ever had kidney issues. It is a hard reality to face. As a mother, the last thing one wants to hear is that your child is ill.”

Although worried, she knew, “he was going to be OK.”

“Growing up in Los Azules, a campo in the area of Salcedo, Dominican Republic, the faith was the center of the community,” she said. “We didn’t have much, but whatever we had was thanks to God.”

She settled with her husband, José, in Brooklyn, where their sons were born. The family attended St. Michael-St. Malachy Parish in the East New York neighborhood.

“It was a normal household, thank God,” Father Torres said. “We went to Mass every Sunday.

“One of the things that helped me growing up was how serious (his parents) took the sacraments. All contributed to the growing and deepening of our faith and for us taking it seriously.”

His kidney ailment surfaced at age 11 when he felt unusually tired. He grew pale, and his legs became swollen. Blood work confirmed the diagnosis, which put him on dialysis three times a week for three hours each session.

Four years later, he needed a new kidney, and his mother was a match.

“Henry is a fighter, and he wasn’t going to let this Illness get the best of him,” Margarita said. “Seeing how he handled his reality gave us strength and courage.

“The recovery, like in any surgery, is hard, but other than that, I’ve been healthy,” she said. “The transplant team was excellent to ensure not only Henry’s wellbeing but mine as well.”

Around the same time, her son had a profound spiritual encounter while on a retreat at the Hispanic Catholic Charismatic Center in the Bronx. It was then that he began to consider becoming a priest. 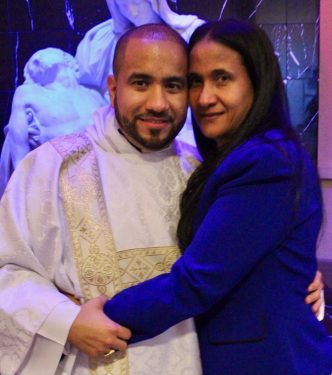 “After he had his encounter with the Lord on a retreat he attended, he became enamored with the Church and Her teachings,” Margarita said. “His father and I always encouraged our children to pursue something they were passionate about.

“(We) always reminded them that whatever they choose, to make sure they would enjoy doing it. We were happy for Henry because he was, and continues to be, happy and joyful in being a priest.”

Eventually, however, the kidney his mother gave him also failed. So father Torres continued on dialysis. Then another donor was found, and the second transplant was a success in 2012.

Still, Father Torres is in awe, knowing his mother gifted him with not only a vital organ, but also her faith.

“It showed me how extreme one is willing to go for someone she loves,” Father Torres said. “It’s literally giving someone a piece of you. It allows me to reflect on the depth of the Lord’s love.

“Then you look at the crucifix and realize the sacrifice of the Lord. It makes it concrete, and it makes it palpable, at least from a human level, how much more is God willing to do that for us.”