Running a marathon is no easy task. Even with years of training, it’s still a grueling test of perseverance and stamina.

In many ways, the journey of life is synonymous with a marathon. It may involve some challenging times that we think we cannot overcome, but if we just keep pushing forward, an end to those hardships – or the finish line of the marathon – will soon arrive.

For Father James Maher, C.M., D.Min., the metaphor of a marathon has held significant meaning. Not only has Father Maher completed 11 marathons, but he’s also now embarking on a new journey. 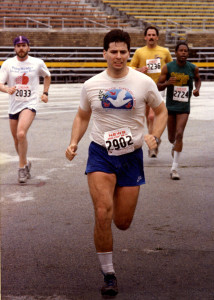 Father Maher took over Aug. 1 as the 26th president of Niagara University, Lewiston, N.Y. For the past 23 years, he has been a staple in the St. John’s University, Jamaica, community, holding a number of different roles at his alma mater along the way.

After being ordained a deacon in May, 1989, and a priest in May, 1990, Father Maher’s “marathon” at St. John’s began as a campus minister. He then became the campus minister to the athletic department, which allowed him to immerse himself in the school’s top-notch sports program.

Through this experience, Father Maher created lasting relationships with the coaches and student-athletes, some of whom graduated as many as 15 years ago. He said it was truly an advantage to minister to the athletics program at St. John’s, since the coaches and administrators were incredibly supportive of the Vincentian mission.

“In ministry, your greatest success comes out of the relationships you form with people,” he said. “I really made the commitment when I was working in athletics that I would travel with the teams. I’d go on the road with them, I’d go to their practices and I’d go to their team meals.”

While St. John’s has been his home for the last quarter century, Niagara has always been a special place to Father Maher. His brother, John Maher, graduated Niagara in 1976, so he remembers taking the seven-hour drive as a 12-year-old with his dad to drop his brother off at school. John also became a Vincentian priest and worked at Niagara.

In addition to visiting the campus in his youth, Father Maher volunteered his services for one year in the Vincentian Service Corps, a lay organization in Niagara Falls, N.Y., that worked directly with Niagara University, right after he graduated St. John’s with a degree in sociology. It was through this experience that he discerned his vocation to the priesthood.

While studying at Mary Immaculate Seminary in Northampton, Pa., from 1985-1990, Father Maher became a regular runner, since the area had plenty of hills and running paths for him to escape his rigorous schedule. He played mostly baseball and basketball in his youth, but he enjoyed his newfound activity. 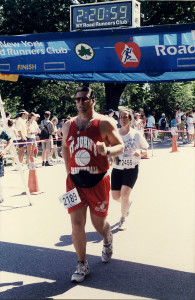 He kept running while at St. John’s, where he also became involved with the St. John’s Bread & Life Program, the second largest emergency food provider in New York City.

Neil Sheehan, a board member of Bread & Life, had the idea of the “Run Against Hunger,” in which the program would organize a group to run the 1994 N.Y.C. Marathon as a way to raise funds and awareness about poverty and hunger in the area.

Naturally, Father Maher – having already completed his first marathon in 1991 – was fully on board. Starting in 1994, he ran 10 more N.Y.C. Marathons as part of the Run Against Hunger team.

Just as a life of poverty can be likened to a marathon, becoming the president of a university – Father Maher’s next challenge – can also be compared to a marathon. He’s fully aware that his responsibility will be a marathon, not a sprint.

“The work is continually ongoing; there are always new challenges ahead,” he said. “I think the great thing about the metaphor of the marathon is the importance of the journey and really staying faithful on the journey.

“The journey right now is at Niagara University as president for me. The calling is to stay faithful to that and see how we can enliven ourselves as a university to live our Catholic mission and our Vincentian mission.”

So far, Father Maher’s transition period at Niagara – also a Vincentian university – has gone smoothly, though he said he has plenty of learning and listening still to do.

“As a Vincentian and a priest, it’s really a privilege to be at a place like Niagara, similar to St. John’s, where the people are so committed and the mission for them is not just a job – it’s a ministry, it’s a vocation, it’s a way of life,” he said.

Though he will have an agenda packed with responsibilities, he said he would still be involved with athletics and support the Purple Eagles whenever he can. He will also frequently run along the tranquil paths of the Niagara River, where he will soak in breathtaking views of Niagara Falls.

As Father Maher continues along his journey on life’s marathon, his time at St. John’s and his time spent on the N.Y.C. Marathon course have fully prepared him for the next phase of his life at Niagara.