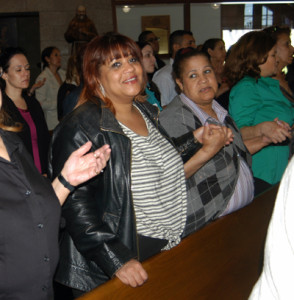 Petitions for health and healing were raised to Blessed Carlos Manuel “Charlie” Rodríguez at a bilingual Mass of intercession at St. Paul the Apostle Church, Corona, May 4.

This year marks the 50th anniversary of the death of Blessed Charlie, who is the first Puerto Rican to be beatified. The largely Hispanic parish of St. Paul the Apostle adopted the saint-in-the-making nearly a decade ago and holds annual Masses to pray for his intercession and canonization.

Among his greatest devotees is another Puerto Rican-born layman, Ramon Amaro, a parishioner at St. Paul’s, who organizes the liturgies and promotes devotion to Blessed Charlie.

Amaro said the annual Mass is an opportunity for people to “ask Charlie that through his intercession God can heal them and do His will.”

Previous celebrations have been held close to the date of Blessed Charlie’s death, July 13, but his feast day was recently changed to May 4, the anniversary of his baptism in Caguas, Puerto Rico, in 1919.

A layman, Blessed Charlie devoted his life to promoting knowledge and love of Christ. Known as a pre-conciliar apostle, he promoted the importance of liturgical life, active lay participation in the Church, the use of the vernacular at Mass and the observance of the Easter Vigil, years before the Second Vatican Council.

Afflicted with ulcerative colitis, he did not let poor health hinder his labors for the Lord. An office clerk by trade, he taught catechism, published religious magazines, evangelized professors and students at the University of Puerto Rico, organized liturgy circles and joined religious societies, including the Knights of Columbus.

“He encouraged everyone to be active in the faith and to celebrate and appreciate the mysteries of faith,” explained Father Da Costa. He hopes today’s laity are inspired to “emulate his (Blessed Charlie’s) example as a lay person who was fervent in his faith.”

Local devotion was evident at last Saturday’s Mass, where pews were filled to capacity and several people in wheelchairs lined the aisles.

Sitting in the front row were Blessed Charlie’s nephew and godson Andy Roda and his wife, Annie, from Puerto Rico.

Directed by Amaro, the Spanish Choir sang an entrance hymn dedicated to Blessed Charlie. Fourth Degree Knights of Columbus from Commodore John Barry Assembly No. 712 escorted a portrait of their brother Knight to the altar with parish children dressed in their native garb.

In his homily, Abbot Rivera spoke about Blessed Charlie’s life and faith, saying, “His main aspiration was to know Christ and make Him known.” He also shared some healings that have been attributed to him.

Written petitions for healing were collected from the congregation and placed before Blessed Charlie’s image at the offertory.

After Mass, attendees were able to venerate a first-class relic of Blessed Charlie – a bone fragment brought from Puerto Rico by Abbot Rivera.

Olivia Galvis pressed her lips against the gold-and-glass encased relic. “I pray for him and I hope he prays for me,” said Galvis, who asked Blessed Charlie to heal a stomach ailment. “I know he can do something for me. I feel it in my heart.”

Abbot Rivera also touched the relic to the foreheads of David Smith, a first-grader at St. Stanislaus Kostka School, Maspeth, and his grandmother, Ana Felipe.

“When Charlie was beatified, our congregation decided … we’d pay tribute to him and keep his spirit alive,” said Felipe, parishioner and Puerto Rican native. “People have been healed through his intercession and … he’s still healing people.”

Upon entering church, Felipe said she approached Blessed Charlie’s portrait and told him, “This is the year you become a saint.”